How to Beat the Bullies 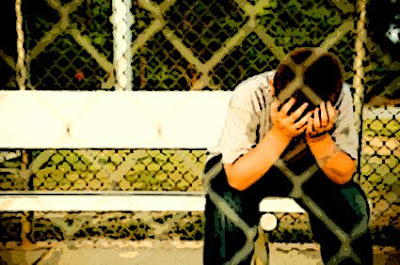 There are many ways to beat the bullies. You can report them to your teachers, or your supervisor.

Or the ones that love you the most...

And hope that they will hear you, and speak out like Colin Farrell recently did.


"I can't remember much about the years of physical and emotional abuse my brother Eamon suffered. I was very small. The thing i do remember though, quite literally, is blood on his school shirt when he came home in the afternoon...People are often afraid of difference. They feel that anything that causes fear, should be turned away from. My brother represented fear for so many people, but caused joy in my life.


Love unites, it brings us closer to an understanding of the possibility of beauty amidst all the confusion and pain that life can bring. Hate is a disease. It is fear's messenger and it makes us do terrible things in a shadow of our better selves, of what we could be.Bullying is torture, it is another betrayal of basic human decency and its scars reach way into the future of its survivors. But the saddest truth is that not all children survive it.


You can also fight them, like I did.  But why should you become violent like them? When today was Pink Shirt Day.


And that's a much better way to beat the bullies.


Especially since the idea came from Canada.


Speaking of my heroes...I'm going to have to include this police officer and his colleagues in the Victoria Police Department. 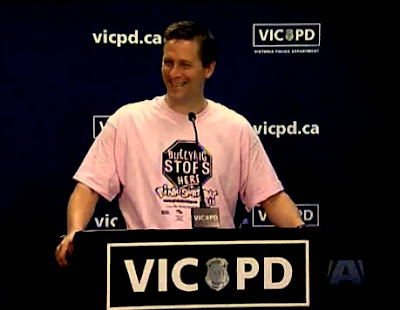 For looking so good in pink. And for taking bullying seriously, when so many don't.


But some things don't change. Bullies are bad.


And bullying must be STOPPED.... 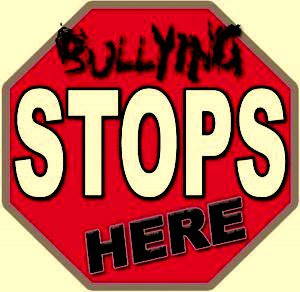 To its credit, CHCH TV Hamilton Ontario had bullying and pink shirts on the program at 5:30 pm and 11:30 pm as its lead subject for discussion.

What about other TV stations? What about talk radio like CFRB or CJAD Montreal? Did they or anyone else even mention bullying?

Did you see the cbc story tonight about the prestige school in Manitoba?

The 'hazing' that basically got the younger boys in residence threatened up close and personal with rape by object by older boys in the residence?

I found it interesting that cbc led off with no use of the word bullying, but used "child abuse" and calling in the cops for criminal investigation in the descriptions. They never used the word bullying until well inside the story and in context with other things.

I couldn't help but think...about bloody time. The sooner such actions get "child abuse" and "criminal/sexual assault and battery" attached to them in the greater vernacular, the better. For children and all people of lesser authority in society.

Threats of violent extermination is the underlay to every piece of bullying. Even when it's...just a joke. Can't you take a joke?

I loathe that line. Because you know it's never meant as a joke. It's meant as a test to see if anyone's going to buck the clique law being laid down.

hi Torontonian...I don't know if they did, but I do know the CBC National News gave it only a brief mention. If they can't be counted on to publicize the fight against bullying who can?
It's very depressing, but I'm forced to conclude after four years of blogging about it, that most Canadians don't give a damn about bullying. But I'm better than that so I'm not giving up...

hi Niles...I did see the story and I also thought the same as you did. It would have been a perfect opportunity to run that story and then run a story about Pink Shirt Day. But the two stories were about a mile apart, and the Pink Shirt Day was only a brief mention.
The more I look at this country the more I hate what I see. Anti-bullying programs in Britain make us look lame.
A country that doesn't care about child abuse? WTF is that?