Are You Ready for a Spring Election? 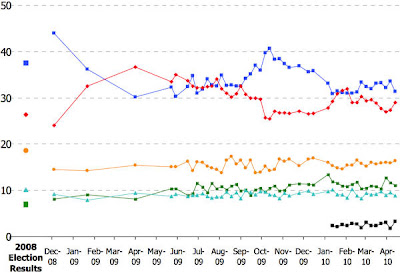 I was almost late for work today, but I just couldn't stop staring at these pretty little lines from the latest EKOS poll. Especially the blue Con one going down like a hot air balloon with a hole Guergis... in its side.


Helena Guergis and her husband Rahim Jaffer are doing what Michael Ignatieff’s Liberals could not – shake up the electorate and provoke a Tory slide, according to a new poll.


But I was surprised that more people didn't pick up on these ominous words:


“Obviously, highly speculative this week but if things worsen for the government over the coming week, speculation about a snap election will become almost as interesting as the prurient innuendos swirling about Jaffer and Guergis,” Mr. Graves says.


Because I believe we could be very well heading for a early summer election. Just like Chantal Herbert predicted.


The opposition parties and, in particular, the Liberals are adamant that they are not seeking a snap campaign. But the matter is increasingly out of their hands and into those of the Speaker and, eventually, the Prime Minister.
No one who watched Harper in action over the time of the 2008 parliamentary crisis doubts that he would be sorely tempted to take his latest conflict with the minority Parliament to the people rather than bow to the opposition and the Speaker's will.


Because believe me Harper does want to go, and sooner rather than later.


All the sordid  scandals swirling around the government can only get worse, and the economy is smelling like roses. But that could change when interest rates start to rise in June. The housing bubble could pop, and the stock market could  take a tumble.


So now is the time. The Liberals are still looking for a campaign plane. Jack Layton is battling cancer. Stephen Harper must be twitching foaming with anticipation.


He could run on the economy, he could shutdown all the inquiries, he could dismiss the Afghan torture and murder scandal, like Peter McKay was doing today in Question Period.


“I just wish,”  (McKay) continued, the rest of his comments playing out rather predictably, “that for once we would get a question from the honourable member that would reflect an acknowledgement that the men and women of the Canadian Forces are continuing to do great work on behalf of our country, at great risk to themselves and their families. He should stop disparaging their name, their work, stop making allegations, insinuating that they are war criminals. That is despicable, detestable evidence.”


And since sadly so few Canadians care about Afghanistan, he just might get away with it.


Of course it all depends on that little blue line. Will other polls confirm the Cons are falling like a hot air balloon? Because if they do Great Ugly Leader probably won't dare take the plunge.


But you know what I'm saying eh? We better be ready.


Because the monster is foaming, hungry and DESPERATE. An election call could come next week. 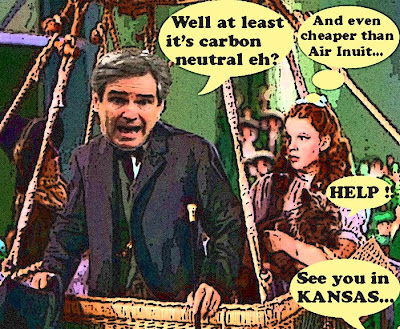 Donolo's office refused the smut from the bankrupt PI before Harpercons' lawyer had it in his hot little hands.

I always predicted a fall election and I'm still sticking with that one. Summer election would be a mess, unless Iggy forms a coalition with NDP and that's a crap shoot as that may well turn off the majority who are centrists. Hard to say...

As you pointed out, Layton has cancer and we don't really know how he's progressing or how sick he really is or if he's responding to treatment. Think Mulcair the mouth will take over if the worst happened to Layton?

We have our own scandal with the Charest Liberals these days which is sadly, overshadowed the proposed health care 25$/ visit user fee as well as 'health contribution at the end of the year'.

I see this scandal of Guergis and Jaffer taking over the more important issues.

I read today that Guergis suffered 2 miscarriages this year; the last one being right before her tantrum at PEI airport, in Susan Delacourt's blog. Between that and her hubby proving to be more and more of a dirty dog, and a misogynistic boss, I'm starting to feel sorry for her.

She was a bad minister and never should have been in cabinet in the first place, but Brother Steve is a worse leader.

Plus I, like many others, are seeing this as sexist on the part of Brother Steve; think about this.

Ex-Lax Max did worse it would seem by leaving his important classified documents at a his scorned ex-girlfriend's house when she went to the media with it. He was never kicked out of caucus. In fact, Julie Couillard was blamed more than he was for that debacle.

It's something to think about.

Either way, Simon, it should be our priority to get Steve out of office as soon as humanly possible and for the love of Gawd; that we do not let him loose with a majority.

ck: "unless Iggy forms a coalition with NDP"

You think Jack and the NDP would trust Ignasty and the Libs after Iggy nearly threw out a disc in his unseemly haste to scupper the last coalition? I gotta say, if I was in Jack's shoes, I wouldn't trust the Liberals -- and Ignasty in particular -- any more than I trusted the Harpokons. Both Harper and Iggy have demonstrated that they can't be taken at their word, and in terms of policy, Iggy apparently has more in common with Harper than he does with Jack.

hi CK...a summer election would be a mess, but mostly for our side, because remember the Cons keep a war room going 365 days a year.
And that's what worries me. If Harper had brought in some poison pill he would have paid for it, but now he can make it look like he didn't really want one, the opposition did.
And since the economy is the only thing he has going for him, I bet you he would want to go now, because as I mentioned in my post, our economy could very easily go south during the summer. Or at least lose a lot of its bloom when interest rates start going up.
And don't forget in the fall the auditor general will present her report on the Porky Action Plan and you just know that's going to be a stinker.
Personally I hope we don't have an early election, but I'm going to start making some campaign videos just in case...

hi 'berto...I know that Ignatieff has handled the coalition thing very badly, but I did detect a certain softening recently.
But then as you know I'm always looking for a shred of hope. I'm frequently disappointed of course. But I know that history will prove me right. A coalition is the only way to beat the Cons and keep them out of power. And what historians will wonder is why did it take them so long?