The Raptors and the New Canada 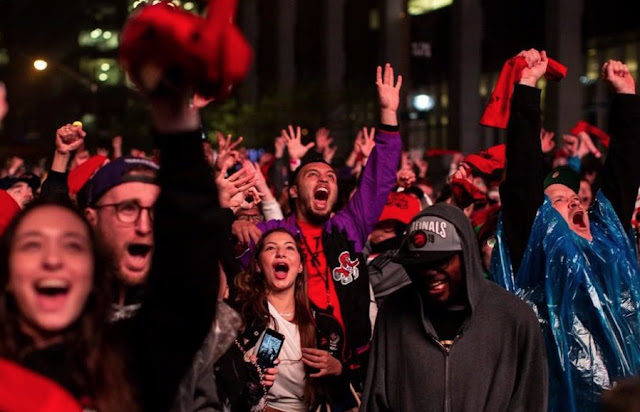 It was another exciting and very loud night in my neighbourhood. The Raptors were playing and defeating the Golden State Warriors in Oakland, California.

But as they do every game thousands of Raptor fans had gathered in the place they call Jurassic Park, to watch the game on giant TVs and cheer on their heroes.

And when the Raptors won the party went on for hours. 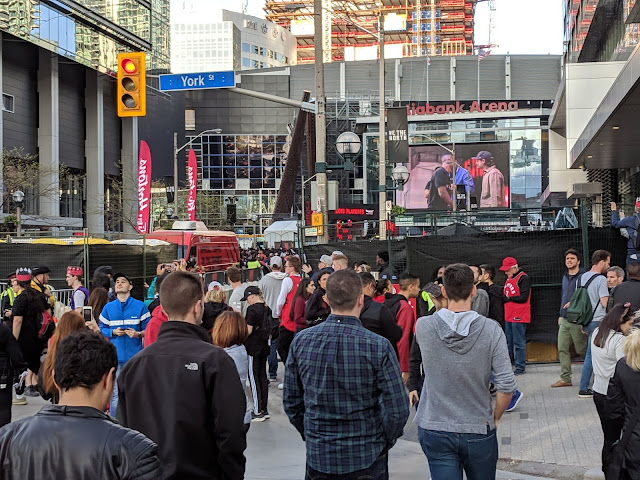 Although I live so close to Jurassic Park I've never actually been able to get into the main area outside the Scotiabank Arena.

And that's because you need to line-up for hours in a queue that stretches for blocks, and might end up being herded into other pens further down the street. 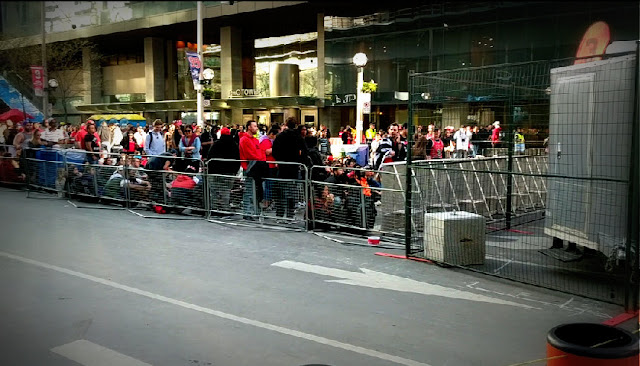 But I have had a chance to get a good look at those fans, and after I heard that they had booed Andrew Scheer when he attended a game, I made an effort to meet and talk to some of them.

And this is how I summed up my impression of them after last night's game. 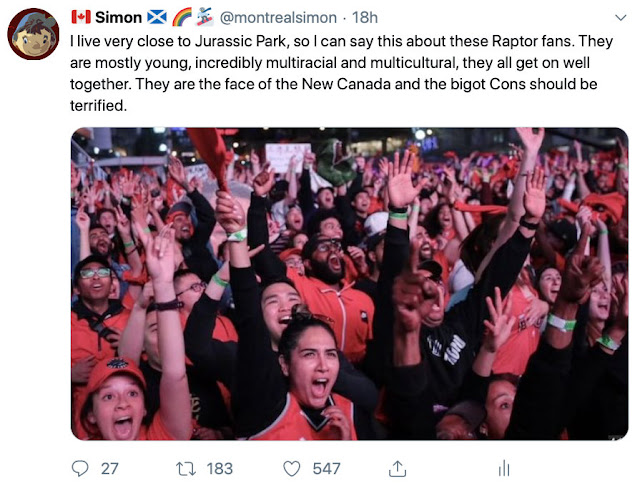 According to the latest polls, most young Canadians support Justin Trudeau's Liberals and the other progressive parties, while most of the over 60s have gone back  to supporting the Cons.

So while I don't know what's going to happen in October, I think it's safe to say this:

The Cons are running out of time, and the future belongs to us...

Now that's a family-friendly parade Dougie and his goons wouldn't be welcome at. Go Raptors and go Team Trudeau!

If the Jurassic Park demographic would vote, you'd likely be right. But they don't, which is why we have old, demented Doug Ford as Premier.

Hi Jackie....I doubt Ford would dare show his face at Jurassic Park. He's being booed all over the place, and if those young Raptor fans started booing him it would be loud, and he'd never live it down..l

Hi anon....People are always saying that about young Canadians, and that was true for a long time.. But in the last election they proved everyone wrong by turning out in large numbers and were largely responsible for Trudeau's majority. So I don't see any reason they can't do it again this year...

You're right that in 2015 young people turned out in record numbers to heave Steve. But even that turnout was still 20% below the turnout for the age 55-75 Boomer cohort.

The question is will young people be motivated to support JT despite his inaction on issues that matter to them, like electoral reform and climate change, or will they stay home and let the Boomers elect Scheer and his rabid Cons?

Hi anon...Two things are needed to help boost the numbers of young voters. (1) The parties must make a real effort to reach out to them and make it clear what they have to offer them and why they should vote. (2) Older progressives must encourage them instead of looking down on them. I try to tailor the style of my blog to make politics more accessible to younger voters who don't follow politics as closely as I do. Others should make more of an effort to do the same...