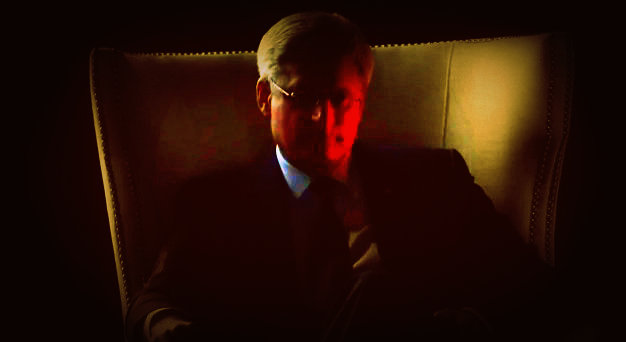 As Canadians debate Stephen Harper's legacy, and the Cons and the Con media try to whitewash it beyond recognition.

It's important to remember one of Harper's worst, and definitely most insane decisions.

His decision to kill the long-form census. 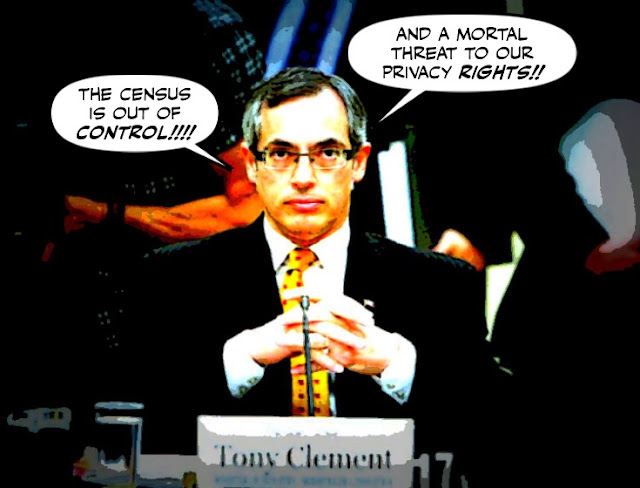 For who can forget how his hapless stooge Tony Clement announced that the census was being gutted?

Because Clement claimed, the Cons had received thousands of complaints from those who felt it was a gigantic invasion of privacy.

Only to be forced to admit later that there were only a handful of complaints, from the kind of people who believe that their TV sets are reading their minds.

And everyone knew that the order had come from the twisted mind of Stephen Harper... 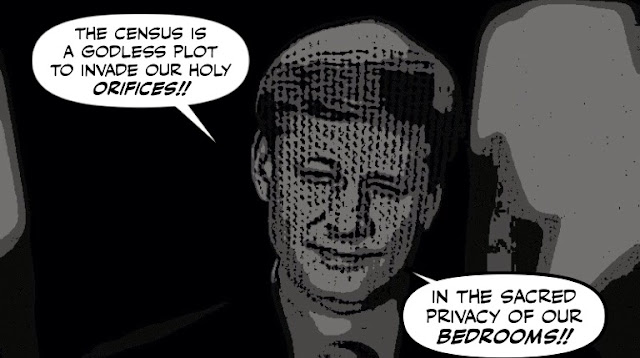 Who we later learned had even considered scrapping the entire census, to satisfy his ignorant teabagger base, and pleasure the screaming voices in his head.

Even though the loss of the long-form census left a giant hole in our collective memory, that can never be repaired. Erased the demographic data of hundreds of small communities.

And left Canadians, businesses, and governments stumbling around in the darkness. 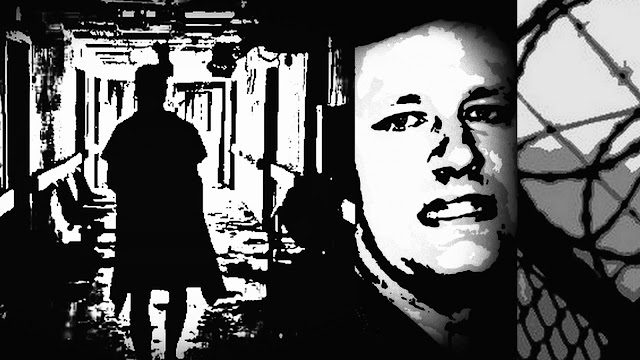 Where the monster would have us live. Where knowledge was power and ignorance was strength.

But here's the good news.

One of the first things the Trudeau government did was reinstate the long-form census. Now the results are in, and for Stephen Harper they couldn't be a bigger slap in the face.

Statistics Canada is celebrating its "best census ever" after 98.4 per cent of the census population filled out their long-and short-form questionnaires this year.

Chief statistician Wayne Smith said this year's collection was the "best census since 1666."

"The 2016 census will provide high-quality information for virtually all communities across Canada," Smith said in a release Monday.

For it now seems Canadians voted twice. Once to defeat Harper's ghastly government.

And give him the boot... 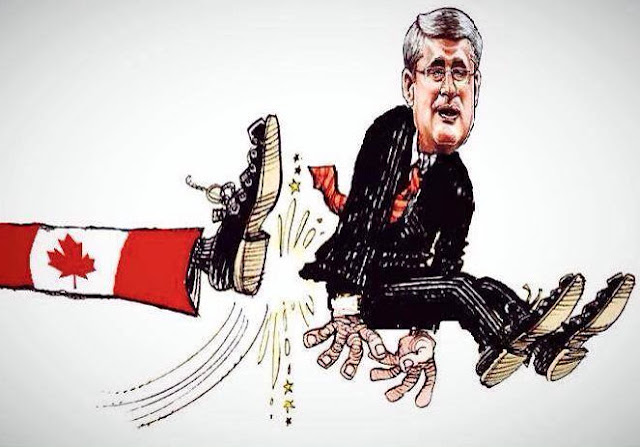 And a second time to reject his foul legacy.

And they don't want the Cons.

Which explains among other things why Justin Trudeau is so popular.

And why Cons like Tony Clement are such losers. 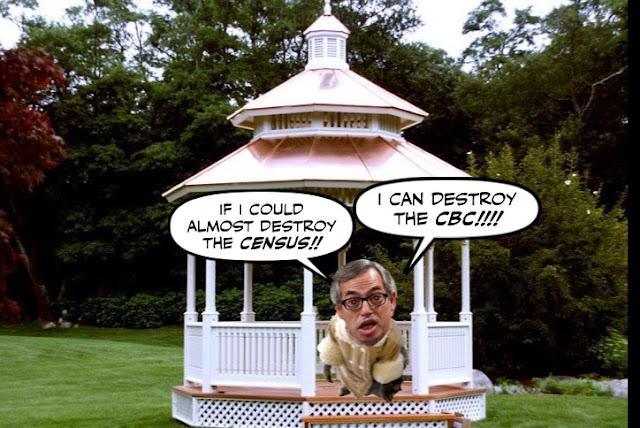 Tony Clement has a clear stance on continued annual funding to the CBC, especially its television programming — it would "go the way of the Dodo bird."

"I would want to liberate the taxpayers from the yearly [$1.1-billion] contribution to the coffers of the CBC," said Clement, a candidate for the Conservative Party of Canada leadership.

For that's all they are good at, corrupting and destroying.

You know, as the Canadian summer continues, at least for a little while longer... 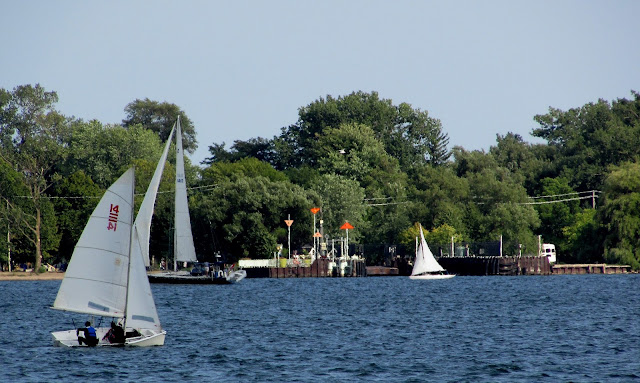 And the flowers in the garden are still in full bloom... 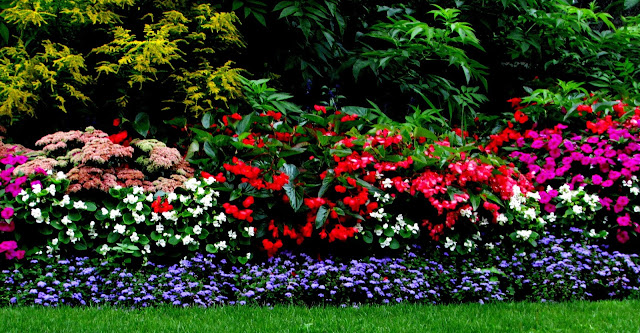 And all is bright and beautiful in The Great White North.

It's hard to remember what the Cons did to this country.

Or think about what this monster might have done if he had won the last election... 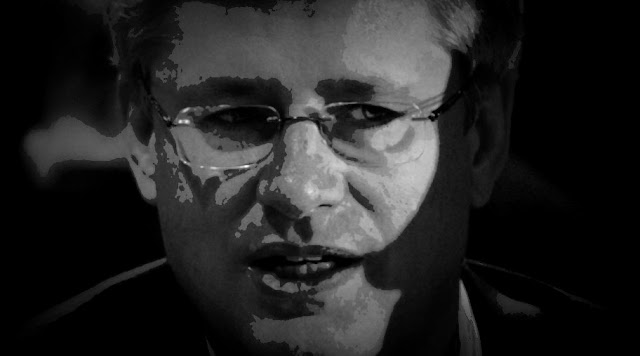 But we should never forget, because he would have taken us to a very dark place.

Thank goodness we defeated him.

We should all be proud of that.

May his legacy live in infamy.

And may a Con nightmare like that one never happen again...

Either that or the Liberanos threatened jail time if we didn't complete it. The asshole came to my door 5 times (that I know of) before I finally decided to fill it out or continue to be harassed.

My impression is that CBC Radio listeners are mainly the over 30s or over 50s but there are a lot of younger fans too. His position on the CBC would likely cost the Cons a small but significant number of votes.

When I heard the response rate all I could think of was, "That was a real slap in the face for Harper".

Heaven forfend that you should actually obey the law. Instead you blame a game employee for repeatedly coming back to "harass" you instead of saying effit and letting you face a $500 fine for being a dick head.

It was nothing of the kind. It was vindication of his decision.

The Harper was 3 minorities (the first Paul Martin's and Harper's Official Opposition) and a single majority, by which time much of his earlier legislation was being struck down by the courts, Con MPs and Senators were in court too , and his centrepiece Big Oil agenda was dead after his smearing of First Nations fomented Idle-No-More.

He'd pulled out all the stops including treachery in order to "unite" the right, wreaking havoc in the civil service and Crown Corps, cheating (which set him up for Canada's only contempt of parliament verdict) (and, If I'm not mistaken, the first in the entire Commonwealth, galling disrespect for the judiciary, parliamentary committees and provinces, promising 15 ice-breakers, and orchestrating non-stop partisan attack advertising against his rivals. Such tactics might have worked even in an uphill battle but, as it was, he couldn't have had it easier with his main rival knocked unconscious by self-drubbing and key petro-provinces governed by right-wing parties like his own. In short, he threw everything at getting his agenda through, all in the luckiest circumstances and he still failed to get it done or to get voters to like him. He was probably condemned him before his sole majority was half over.

Harper's legacy is actually a huge sigh of relief, not only in Canada, but from our friends around the world who were too diplomatic to mention it whilst he was in power, and aren't worried he'll return to avenge their atypical jubilation. Such rejoicing among the diplomatic community is usually reserved for dictators and warmongers. The best part: the rest of the world saying they love us and are glad we're back.

Ironically, Harper's regime is analogous to his (now-temporary) long-form census sabotage: his historiography will be likewise an unfortunate hole in the continuity of our national timeline.

Finally, Harper wouldn't have gotten near as far as he did if it wasn't for the collapse of the Liberals. That anomalous vacuum is what historians will feature, Harper's regime being merely a consequence---like bacteria that avails a hole in a tooth. Thus the history books of tomorrow will probably footnote the Liberal vacuum by the four parties that took advantage of it: the Cons who never were loved and were booted immediately when the Liberals had showed solidarity after their consequential absence; the NDP which now has Official Opposition in its CV but, more importantly, has earned legitimacy in Quebec and sophisticated voters there have a new card to play in their hand; the Greens who raised their profile by beating a Con for their first seat and kept it in incumbency; and the Liberals themselves whose internal warfare didn't kill them, and who are now the stronger for it. History might also note that Canadians were smart enough to decimate, not exterminate the Cons, wisely reserving the option of seeing if they can redeem themselves, the key being that it'll be without Harper; if they are to be redeemed, it's the least they have to do.