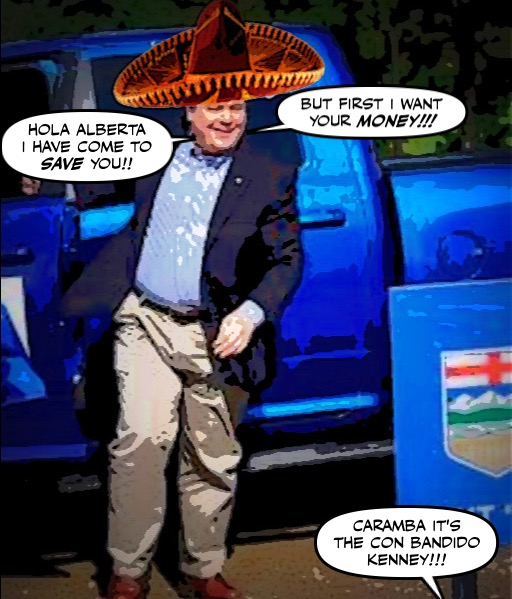 With every passing day Jason's Kenney's tour of Alberta in a Made in Mexico pick up truck becomes even more outrageous, and even more expensive.

For while one might hope that Kenney is paying for his own hair cuts... 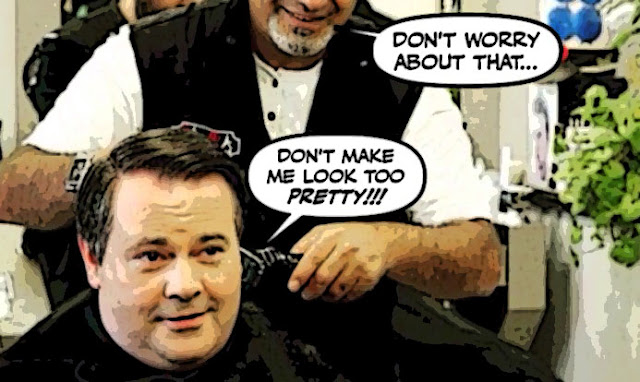 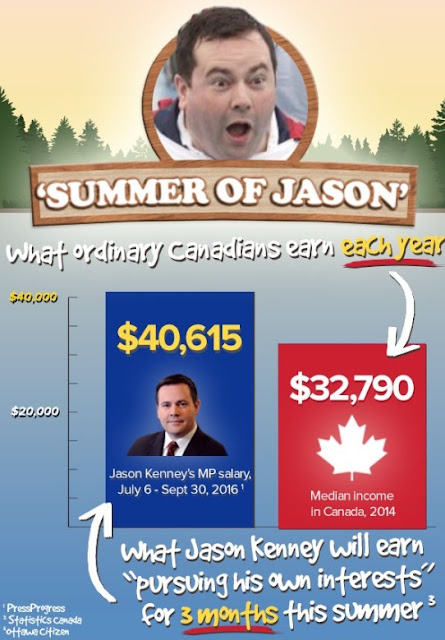 Even though Kenney is now working full time to try to become the leader of a provincial party.

The former federal cabinet minister has met popes and presidents. He once dispatched fighter jets to vaporize jihadists of the Islamic State of Iraq and the Levant. His luggage is still adorned with the weather-beaten tags of a 2015 prime ministerial trip to central Europe.

Now he’s drifting town to town handing out pamphlets and camo-patterned hats, steering around road-killed skunks and introducing himself to strangers over the sound of mooing cows.

And has even given up his seat on the committee studying electoral reform.

So he can pursue his grandiose dream of uniting the right, and "saving" Alberta from the NDP... 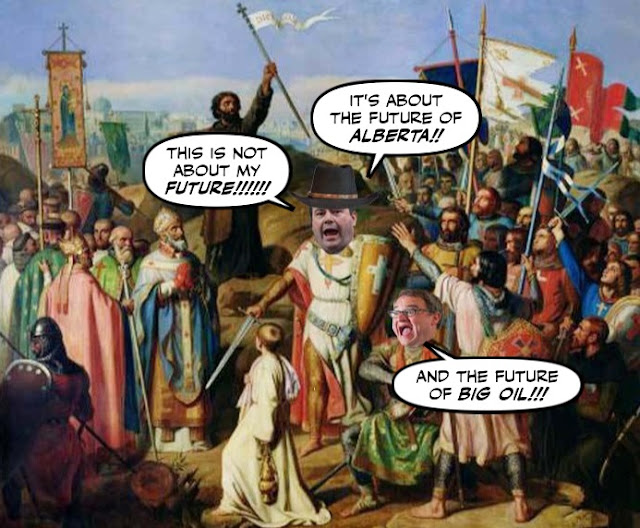 Kenney contends at every opportunity that he’s a reluctant saviour. There were “many interesting things” he turned down to pursue provincial politics instead.

“Someone has to do this, right?” he said in Red Deer.

Nevertheless, for all this stated humility, the potential payoff is massive. If all goes according to plan, Kenney will be able to crush Canada’s only NDP government and spend the rest of his working life commanding the country’s most interesting pentagonal shape.

Which has the NDP wondering when that Con bootlegger will resign.

And has even the Globe's Con editorial board wondering whether by taking advantage of the lax election spending laws, he is the last of the Alberta cowboys. 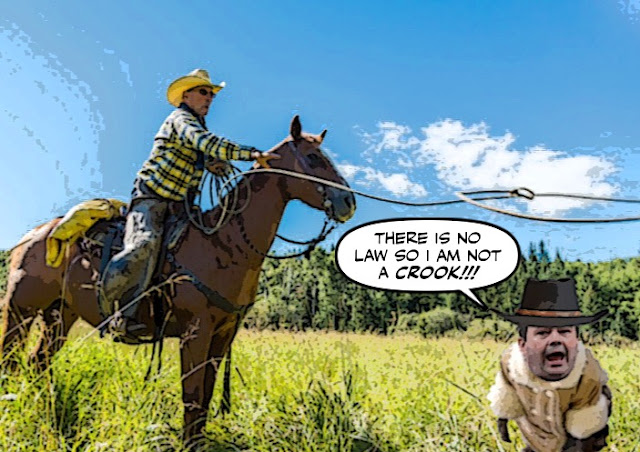 It makes no sense to have donation and spending caps in general elections, but a spending free-for-all in the internal party campaigns that decide who will be leading a party into an election. We don’t want a system where leadership candidates with the biggest bank accounts have an unfair advantage.

Mr. Kenney is Alberta’s last political cowboy, riding the unlegislated range and free to raise money and spend it as he pleases. It’s understandable if he doesn’t want the status quo to change. The rest of us should feel somewhat differently.

Uniting the right won't be easy. The turnout for some of Kenney's events has been minuscule or simply pathetic. 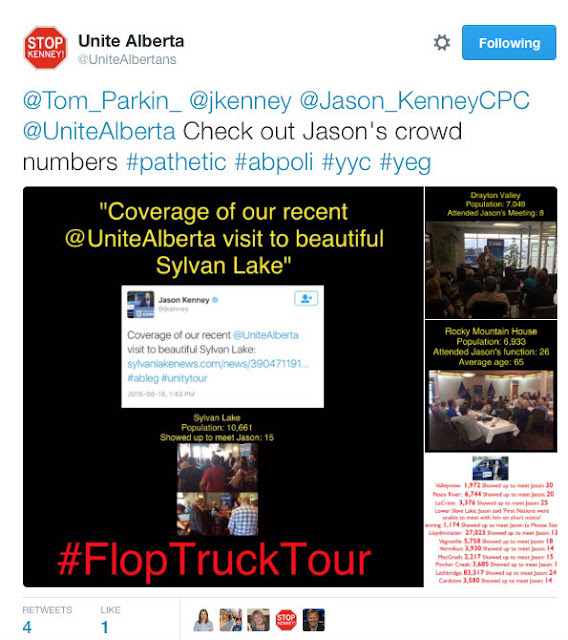 His poll numbers are not encouraging.

At the very best, Jason Kenney faces an uphill battle in his bid to unite the right, according to an exclusive ThinkHQ/Metro Poll. Kenney’s approval numbers are not that promising on a provincial scale according to ThinkHQ president Marc Henry.

“He’s got an advantage in terms of his profile with Albertans, but his numbers are not overwhelmingly strong,” said Henry. “He’s got 37 per cent of Albertans who approve of him, but he’s got 35 per cent who disapprove. It’s kind of 'meh.'

And even a conservative radio host is calling on him to resign.

"I am a small-c conservative, I tack right on most issues, pretty much all issues," radio host Andrew Lawton told listeners on Calgary's AM770 Thursday afternoon, adding "I believe (MPs) need to be, if they are taking a public salary, representing the people they represent."

Lawton questioned how Kenney – a former director of the Canadian Taxpayers Federation – could "claim a salary when you're not using that job as your primary role?"

So his conquest of Alberta is far from assured, and could still end up badly... 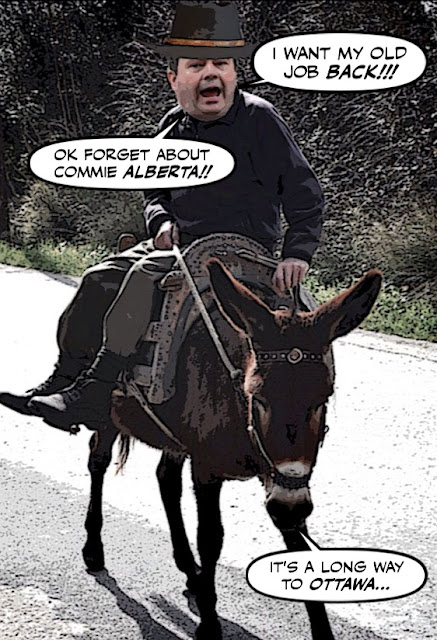 Which would only be what he deserves.

For that ghastly Con really is shameless.

And the end of his long and shabby political career can't come soon enough...

Same old, same old. The parties on the hill may change but the self indulgence of the politicians remain the same. Just look at Jane Philpott. The middle class investment in mass transportation is beneath her to use. Apparently just another example of "their talk does not match their walk". Another example is John McCallum and his plan to bring in more cheap foreign temporary workers (Canada's answer to the slave trade).......... got to keep Canadians unemployed and deflate wages to keep GREEDY Corporate HOG profits up!!!!!!! Funny how they can pay themselves salaries and perks whilst even their own employes cannot get paid. And yes Simon I do get out lots!!!!! Patiently awaiting "real change." Because it is 2016"............soon to be 2017!!!!!!! "Sunny ways my friend, sunny ways"...........if you are a politician!!!!!!!!! LOL LOL FS

One of Harper's many clowns who seem to be headed to oblivion.

I don't care whether it's the Cons or Wildrose who win as long as they take out the NDP trash. Notley partying at the Red Star bar (you can't make this stuff up) while Fort Mac burned. Can't wait to see those commies sent packing.

hi TS....yes and the sooner the better. For if Kenney ever does become Premier of Alberta, he could damage this country almost as much as Harper did....

hi anon...I've never heard that absurd story. Where do you get your information from, the Rebel Media?

Google Rachel Notley Red Star Bar. There's a few articles about it. But yes, I did hear that story on Rebel originally.

Give me a break!

Ok, but first let's get rid of the Neo Con fascists in Alberta.

beyond ridiculous. this just in, your hero, Ralph Klein, was a raving drunk!!! who missed meetings with dignitaries due to hang overs!!!