The Beginning of the End of Donald Trump 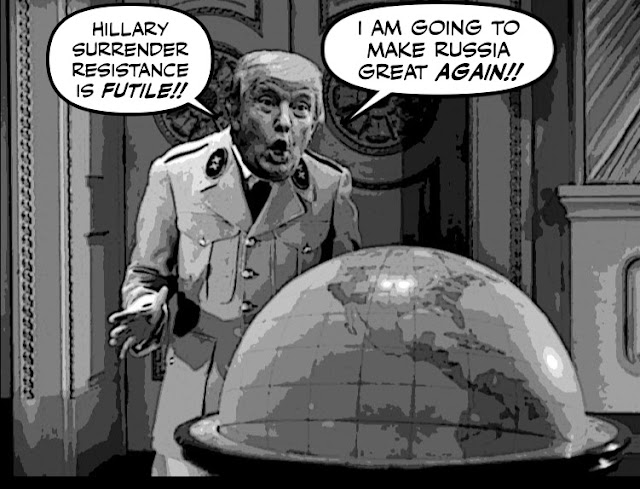 When I last left Donald Trump he was crowing about making America great again, while seeming to take his orders from Vladimir Putin.

But somehow still managing to enjoy a slim lead over Hillary Clinton.

But what a difference a week makes. For now I'm in Edinburgh attending the world's largest art festival. 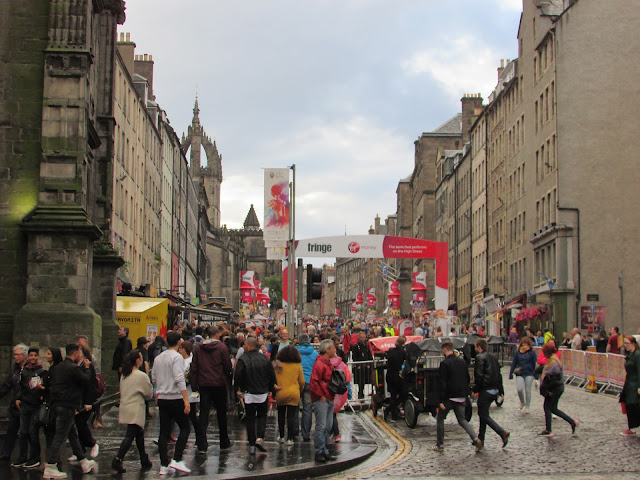 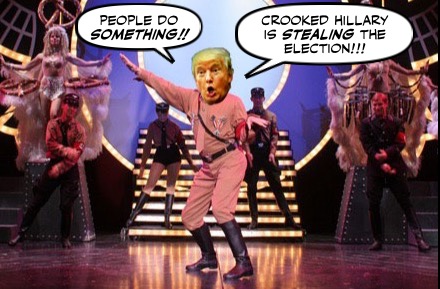 Because he's now looking desperate as his polls start collapsing.

Hillary Clinton has a large and perhaps growing lead in the nation and in many of the predominantly white battleground states where Donald Trump was thought to have his best shot, according to a wave of new surveys released in the past two days.

After a REALLY bad week...

And once Americans get a better look at the kind of people who are supporting him...


And realize that Trump and his supporters are real fascists.

His chances of winning the American election will become even slimmer.

Maybe it's just because I'm so far away, but on a sunny morning in Edinburgh. 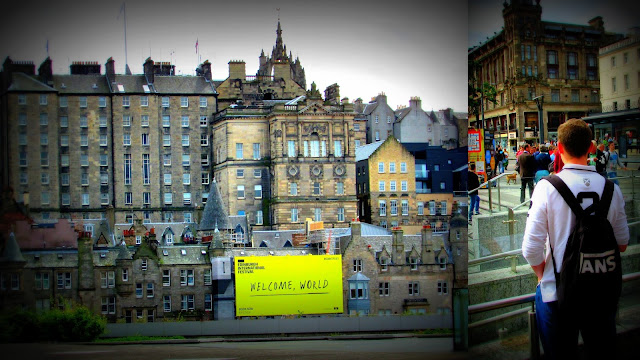 I can't help feeling that sanity will prevail.


Please tell me it is insanity.

Labels: Donald Drumpf, Donald Trump, The Collapse of the American Empire, The Death of the Republican Party

Hillary's no prize (I would rather have Saunders), but I don't care as she's still a way better choice than Trump who has expressed a desire to nuke nations, but has no understanding of the ramifications in doing so (like a lot of his idiot supporters.)

The amazing but not surprising part to me is that Arizona and Georgia lean Hillary! Both states which were once strong Red states but they also have significant growing Latino populations who, for very good reasons, don't like being called rapists and drug dealers.

If you've ever wondered why many states with GOP governors have enacted "voter fraud" acts then this pretty much why. They believe that suppressing the minority and poor voters will keep them GOP (and rich whites) in power forever (sound familiar?) while failing to answer the changing demographics of their states. Instead of trying to deal with/accept that the US isn't going to remain a "white" nation (whatever the hell that is), these clowns are attempting some bizzaro US version of Apartheid. It might last a few decades, but that will come crashing down due to mass.

Trump will win. Voting for Hillary is like having Canceer and asking for stage three. Trump is a Mexican cure that America will lach onto. Everbody is going to be sick in the end dont get me wrong.

How? I don't see how unless you've been reading the hilariously awful Unskewed Polls site run by a non mathematician. 538 and other sites (which have been pretty good for election prediction in the States) show Hillary's got enough large predominantly blue states that total around 230-240 electoral votes and only needs 30-40 more electoral votes to win.

Trump is losing states he isn't supposed to lose like Georgia and Arizona. It is close in Utah which hasn't voted Democratic since 1964.

Unless something really bigly (sic) happens, Trump has almost no chance and it's not even Sept.

Hi Dan...I too would rather have Bernie, but his supporters will be a potent force and in position to take over the Democratic Party in the 2020 election. And as you point out, Hillary is still a much better choice than Trump.

Hi Steve....I'm sorry but you are delusional. Trump is going to go down like the Hindenburg. Angry old white men may make a lot of noise and fart loudly but there time is almost over. By the time progressives are finished with Trump he'll be about three inches high, just big enough to step on....

Fascism is actually a radical, left-wing ideology that combines extreme nationalism with socialism. Benito Mussolini was a member of the Italian Socialist party. He disagreed with its pacifist during the first world war and left the party to found the Fascist Party.

His party was committed to radical revolutionary change and took power in his march on Rome. He espoused a totalitarian corporate state. The left wing Fascist party merged and absorbed a right wing nationalist party that also espoused corporatism.

The precursor to the National Socialist German Workers Party was the Deutsch Socialist Party which was founded by an occult group called the Thule Society.

Adolf Hitler was recruited by the German military to infiltrate this left-wing party to spy on it. The ideology of the party was the same as his, a combination of intense German nationalism and socialism. Hitler took over the party's leadership and shortened the name to the National Socialist Party.

The history of the twentieth century shows that totalitarianism arises from the left not the right. Communism, Marxism, Marxist-Leninism, Maoism, National Socialism, and Fascism are all radical, revolutionary left-wing parties. So called "progressives" are responsible for great evil in the past century. For eugenics, death camps, experimentation on human beings, abortion, and euthanasia.

When people turn from God they always embrace evil secular ideologies or even occultism itself.

Progressive secular social liberalism will do the same.

Donald Trump is the lesser of two evils. The real evil is with the Democratic Party. The left-wing feminist Hillary Clinton and the Democratic Socialist Bernie Sanders are the true proto-Fascists. Both feminism and socialism are radical ideologies espousing an unrealistic Utopian future in the minds of their followers. There is a totalitarian impulse in these ideologies as evident in your response to Steve.

You under estimate the spirit of liberty and freedom in the American people who like I realize where the greater evil lies.