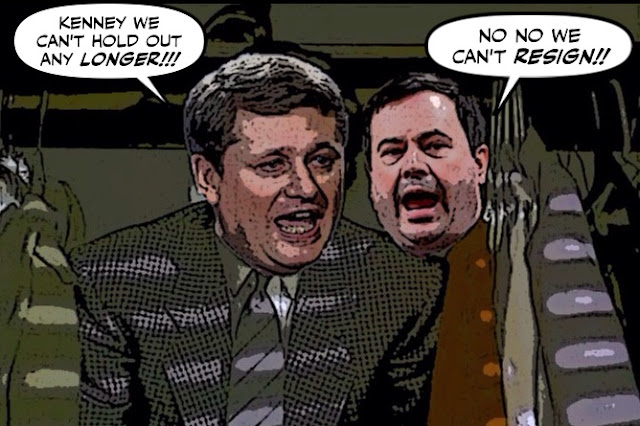 As we know Stephen Harper and Jason Kenney have been in the same leaky boat, or the same sweaty closet, from the day the Con regime was crushed and humiliated.

Still collecting their big fat MP pay cheques, while doing nothing to deserve them.

With Harper setting up his own business, and Kenney campaigning for another job in Alberta.

But now at last it seems they are finally about to summon up the courage to resign.

And it turns out it won't be THAT painful. 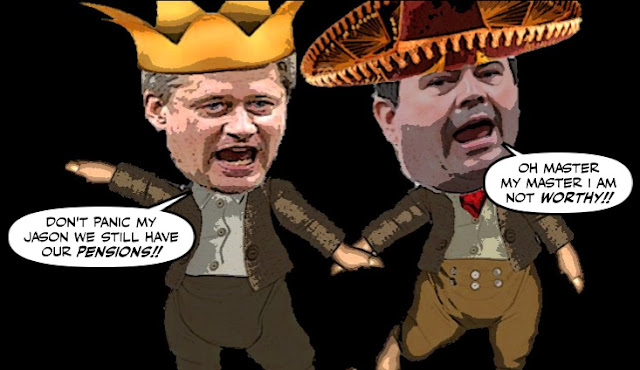 Not with the big fat juicy pensions they are about to receive.

As Stephen Harper and Jason Kenney count down the days before exiting federal politics, they can start adding up the several millions of dollars they’re ultimately in line to receive from the parliamentary pension plan.

It’s an enormous amount of money for two MPs who, in the 1990s, labelled the pension scheme as “obscene” and came from a Reform Party that had fought against a lucrative “gold-plated” pension plan.

And so much for Stephen Harper, who once smirked obscenely when asked to help  bolster the humble Canada Pension Plan.

Even though he'll soon be rolling in dough, like a pig in a trough... 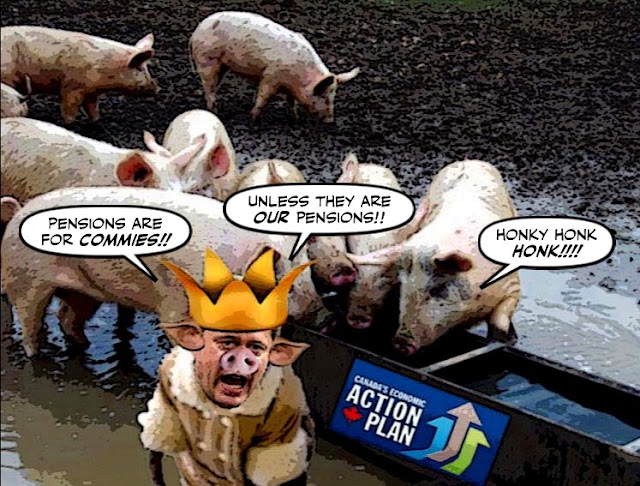 While millions of seniors struggling to survive on their tiny CPP cheques, slowly die of poverty and degradation.

So much for the grubby Conservative Party that is still fighting to steal the food off the tables of the poor and the vulnerable. 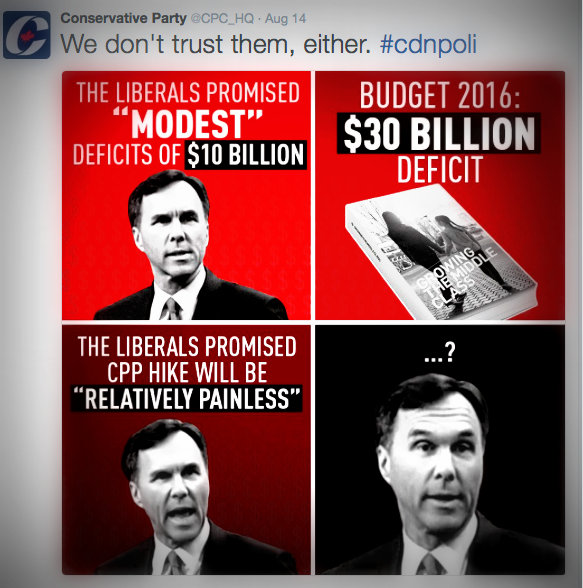 And of course so much for Jason Kenney, who would roll around Alberta in a Mexican-made pick up truck, to try to pose as a man of the people.

Would make us believe that he never wanted a gold-plated pension. But will take it anyway.

And is no doubt hoping he will soon be able to trade in his Mexican pick-up truck, for something bigger.

Or something more Jason...

So he can keep riding the gravy train of power he craves so much.

And keep running over his enemies...


Alll my followers, I lost my job today most likely due to my speaking up against @jkenney Let us all do what we can to expose @jkenney #yyc
— Unite Alberta (@UniteAlbertans) August 22, 2016

Like that good progressive who has apparently been made to pay for helping lead the struggle to stop Kenney in his tracks... 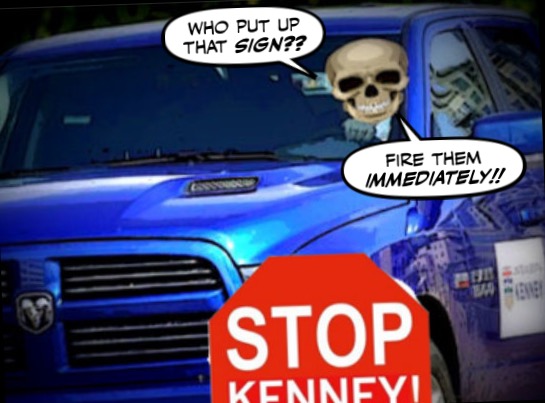 And try to save Alberta from that ghastly bully.

Because some progressives are still fighting to save this country. While others do nothing, or have fallen into a deep sleep.

Or like the depraved Mound of Sound find any excuse to attack Justin Trudeau.

Even if that means turning this moving moment into something ugly... 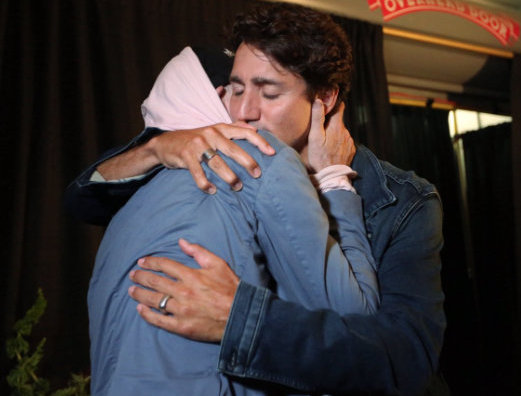 As only that miserable misogynist, vile homophobe, and deranged Trudeau hater could.

You know, last night I spent some time at this monument to Jack Layton, on the fifth anniversary of his death... 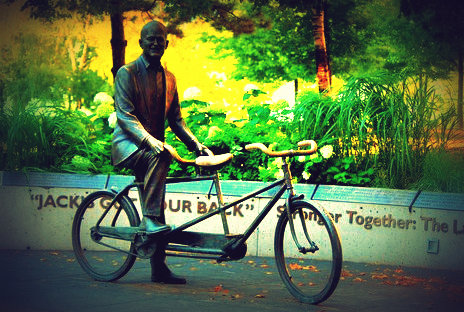 And it was a sad moment, for I have always supported all progressives, red, orange, and green.

And I miss Jack, the happy warrior, who never stopped fighting the Cons until death stole him from us.

And needless to say my struggle will also continue.

Until the Cons are finally destroyed... 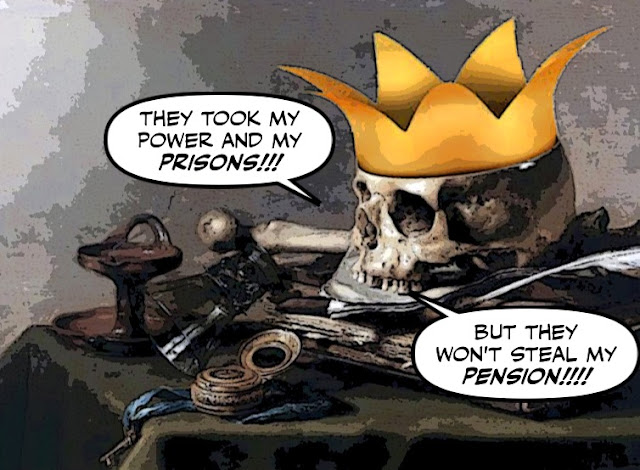 Until they are just a bad memory.

And we are truly free at last...

And they are carrying out this 'campaign of disruption' against Jane Philpot for 2500 dollars. Is this campaign paid for by US HMOs or greedy Canadian doctors who would like to prevent her from protecting our public health care system, of which she is a great supporter.

Destroy them until they're just a bad memory? They just ran the country for 8 years and are the Official Opposition good luck with that. Prime Minister Slick aka The Dauphin would be unemployed smoking weed in The Plateau sharing an apartment with 6 other "artists" if he was born Justin Thompson instead and you know it.

hi anon...Jane Philpot has the potential to be our best Health Minister ever, and the campaign against her is small minded and pathetic. But no it's not the HMOs or our doctors, it's only the work of our filthy Cons, and Rona Ambrose the worst Health Minister ever. I plan to defend Philpot as soon as I can....

Hi Mound (i.p. # 70.67.224.249) How very typical. No attempt to excuse your cheap post. No words of sympathy for the real progressive who lost his job fighting Kenney and his gang. Just a crass attempt to popularize your nickname for Trudeau "Slick." Which somebody needs to tell you isn't very good. No attempt to apologize for your "Sick" behaviour in the past. And now no attempt to conceal your love for the Cons. For your information about a third of the population watched the Hip concert. It was a wonderful show that brought Canadians together. Gord Downie said having Trudeau there made the night even more special, while managing to put a little extra pressure on him to keep his promises. So it was special, and if you don't get that, and all of the above I feel sorry for you, because you really are a loser....

of course there will be solid gold pensions, much better than simply gold plated. but they feel they are entitled to them, they worked so hard for the country. just ask them.

Once people become used to the trappings of office, they have a sense of entitlement. it doesn't take long. as that old song from WWI goes, how are we going to keep them down on the farm after they've seen gay Paris.

There will be pensions, but perhaps not as large as their current salaries, so they will hold on to these jobs until they are very sure they have new jobs.

The average Canadian needs to fend for themselves. they are part of the great unwashed, not part of the great rip off set. Its like out here in B.C. People on disability haven't had a raise since 2007. Christy Clark thinks they can live on $908 per month. They got a raise and then she immediately clawed it back by charging the disabled for their bus passes, so their raise is actually $21. Now the disabled in B.C. have to make up their minds, do they want to eat or buy a $50 bus pass each month. This of course is in a province where a bull doze special is $2M and rents are a couple of K per month. All the while Christy floats around on private jets and helicopters, her salary and an extra $50K a year she gets to skim from the take at private fund raisers. Christy can't possibly get along on her salary, so she needs an extra $50K per year. the disabled need to get along on $908 per month.

The federal Cons had best remember what Tony spent on his gazebo before they complain about any Liberal M.P. and their spending. of course it would be prudent for the new federal Liberal M.P.s to keep a very tight reign on their expenses. The trappings of office can soon trap you and there goes the majority. As they say the undoing of Bev Oda was over a $16 glass of orange juice.

Anonymous said...
This comment has been removed by a blog administrator.
3:19 PM

"No words of sympathy for the real progressive who lost his job fighting Kenney and his gang."

That "real progressive" is as big a fraud as Kenney and Harper, only problem is you and the rest of his sheep supporters are too stupid to see it. Kenney's fault he was fired? LMAO

To hell with the peons. F**k 'em all. As long as the biggest welfare drain in the country keeps on keeping on. Peons should be responsible for their own retirement savings. Why are MP's exempt?

Hi e.a.f....one thing that really makes me really angry is when governments give poor people some more money, and then claw it back in some manner. I have looked after seniors who are forced to choose between their food and their medication, and I will NEVER accept that, not in a country as rich as Canada...

Hi anon....my position is crystal clear. I believe that Jason Kenney is an evil man, a religious extremist, and a bigot. So any enemy of Kenney is a friend of mine....

Hi anon....I don't object to politicians getting pensions. What I object to is the hypocrisy of those who would deny poor Canadians a few extra dollars, but would give themselves gold-plated pensions. It's important to remember that pensions give seniors more money to spend, and that helps boost the economy which is good for everyone....

Back in the mid 90s there was a solid media campaign in BC against the then governing NDP -- http://thetyee.ca/Views/2005/04/20/CampbellMisledPublic/

Today we have news of the Kenney campaign and their 'fudge it' financing -- http://www.progressalberta.ca/jason_kenney_is_wrong_unite_alberta_is_actually_a_for_profit_corporation