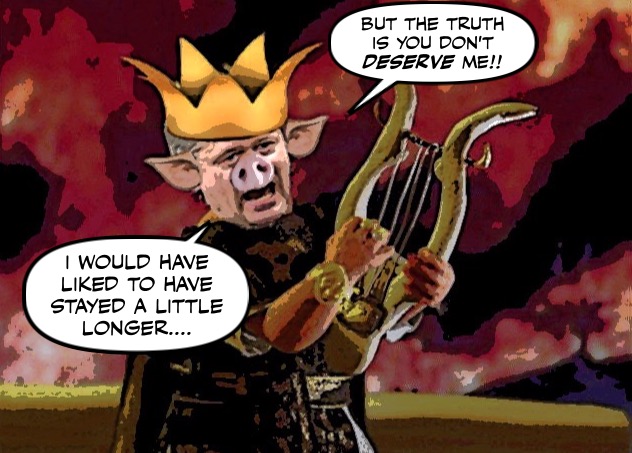 Yes, it's true. After living high off the hog for about ten months after he was defeated and humiliated, the mad emperor has finally left the building.

Stephen Harper is stepping down from Parliament and going into business, hoping that his credentials as a former G7 leader will lead to a successful consulting career on the international stage.

Now please stand by for a message from Great Fallen Leader.


Thank you to Calgarians and Canadians for having given me the honour of serving the best country in the world. pic.twitter.com/afidHZ9xgr
— Stephen Harper (@stephenharper) August 26, 2016


I note that he leaves just a few days after receiving the Order of Liberty from the President of Ukraine. 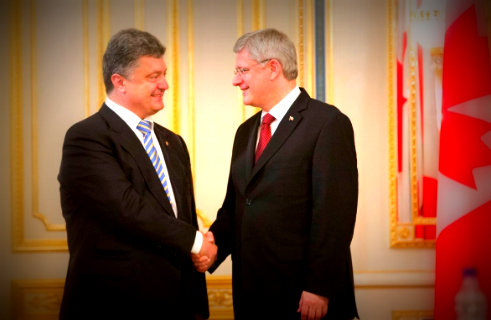 An honour he will never receive from his own people.

For he was the worst Prime Minister of the worst government this country has ever known.

And will only be remembered for the damage he did to our precious Canadian values and our democratic traditions.

And for his failed attempt to change this country beyond recognition... 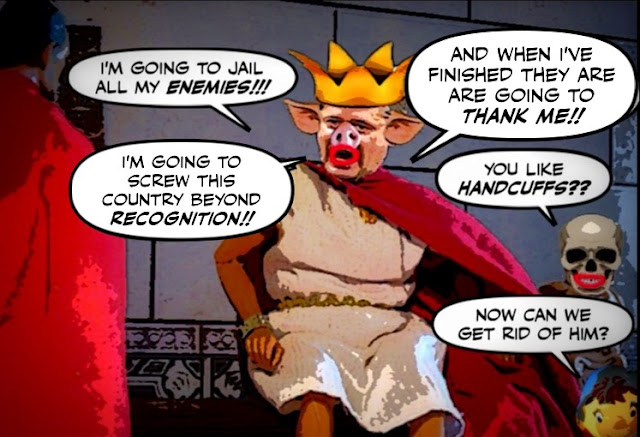 For me it marks the official end of my long campaign to defeat him. A campaign which took years out of my life, but which I will never regret.

Because it was a small sacrifice for the country I love so much.

And which today never looked so beautiful, now that the shadow hanging over us has finally lifted forever... 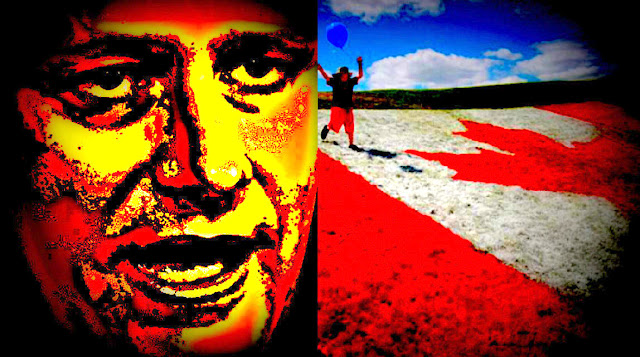 And we finally have our Canada back.

I could say so much more, but I'd rather not. For the sooner he's forgotten the better.

And now that I've got my life back, I intend to enjoy it.

So all I will do is leave you with this video I made to celebrate the beginning of our first Harper-free year...

And with another video I made on the occasion of our first Harper-free Canada Day.

And even more fireworks...

Glory hallelujah. Our country survived. He failed to destroy it.

We won. May a nightmare like that one never happen again.

Thank you for your service Mr. Harper and God Bless. While Trudeau is hell bent on turning Canada into a third world hellhole, you stood up for old stock Canadians and our Conservative values.

i sure hope he is gone for good this time. though i still worry about the rest of the world - what good advice could steve possibly offer other countries?

any info on what "international consultant" means when put into the same sentence with the harpie? cheers, lf

you for real, man?

...actually, i think the answer to my question is obvious: you are an 'old stock Canadian' with 'Conservative values'...

What a great day. We no longer have to watch him sneak in and out of Parliament through the back door like the theif he is. His speech reveals he's still suffering from Delusions of Grandeur, which seems to aflict most if not all of them which is propped up by their Nut Job fan base. These idiots could never hold jobs in the real world and it's a damn shame we have to pay any Conservatives a Pension/Taxpayer Charity Program when what they really deserve is a jail cell. Good Riddance Harpy. You were the worst PM this country ever had and your Cabinet was a bunch of clapping seals. Thank You Simon for all the great posts. I'm catching up on a few now. Friends in town for a visit, somehow landed on a post from 2012 during the dark times. I got the hell out of there as fast as possible! That was Scary. Thanks for fending off the Con Fluffers for us, I know how disturbing it can be to descend into their vile hatred even for a minute. Sunny Ways ❤️💚💜💗 Pamela.

No thanks for you Harper and I hope you rot in hell. While Mr. Trudeau keeps repairing the damage you've done, you stood up for young and old hateful, divisive, racist bastards and had the gall to call it Conservative values.
JD

Did you guys even watch his farewell video? The best is yet to come. The Conservative party will be in power again, and the Liberal party will fall. And to steal one of Simon's most overused closing statements "and they cannot be humiliated and destroyed soon enough".

Good riddance to a petty, spiteful, vindictive man, with political views to match.

Oh you mean like how he pushed the debt up to record levels or how he stood up for Canadians by expropriating the land of a farmer back where I grew up that had been in the family for generations? Pushing around an 80-year-old man......Is that your idea of liberty?

Oh you mean like how he pushed the debt up to record levels or how he stood up for Canadians by expropriating the land of a farmer back where I grew up that had been in the family for generations? Pushing around an 80-year-old man......Is that your idea of liberty?

I'm glad he is gone from our political scene. We need to remember though, it was the citizens of this country who elected him. Now eventually even those had enough of old Steve and he got the heave ho, but with democracy you always have to be on the look out for the next idiot who wants to run/ruin the country. Harper almost got away with it. fortunately for us, he adversely affected so many people they finally got rid of him.

Now lets get on with improving the country and that includes people becoming more politically involved, even if its just ensuring they go out and vote in each and every election.

"Through force of character, great wisdom, and endless work he managed to reunite conservative Canadians and fellow travellers to create a coalition that formed the longest-serving Conservative national government since Sir John A. Macdonald in the 19th century," Conservative MP Jason Kenney said in a statement.

Kenney was mistaken. Mulroney also was in office for 9 years.

what good advice could steve possibly offer other countries?

As far as I can tell he has a 99.9% record of being wrong in international affairs so just do the opposite of what he advises and you should be fine.