Gord Downie, the Tragically Hip, and the Canada I Love 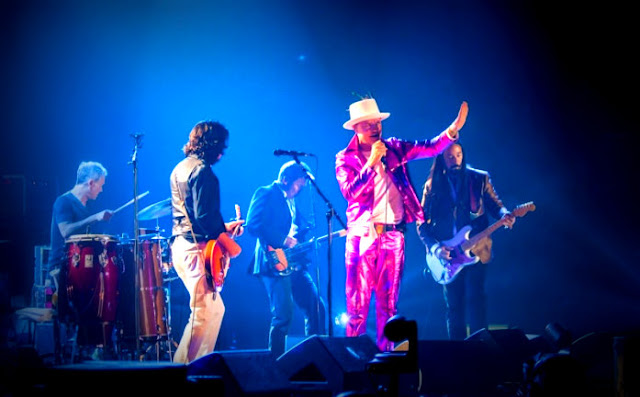 It took me a few years to  fall in love with the Tragically Hip. I always loved their name, I thought it was so cool or...um...so hip.

And when I heard that their lead singer was a poet I was even more impressed.

But it wasn't until my big brother took me to one of their shows, that I realized what a great band they were.

And their final performance last night was the best and most moving show I have ever seen. 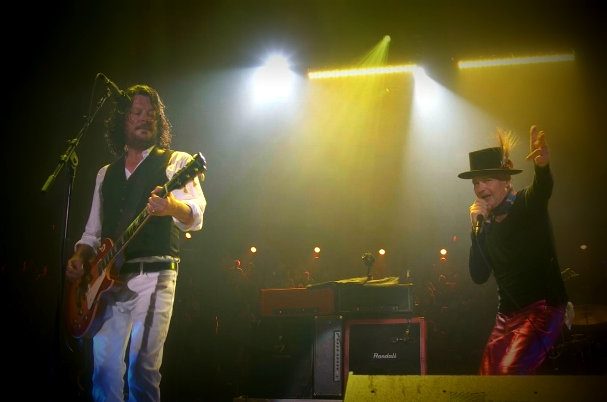 For it was both sad and joyful. Gord Downie was simply amazing. And never have I seen a musical event bring so many Canadians together.

With all of Canada watching, Gord Downie stormed a Kingston stage Saturday for the final show of what’s believed to be the Tragically Hip’s farewell tour, donning one last set of eye-catching outfits in silver and fuchsia, shimmying one last set of gloriously unpredictable dances, and howling one last set of those enigmatic poems that so many of us know pretty well by heart.

And, apparently, by throat, judging by the way this audience filled every inch of that small, sweaty arena with each syllable of Downie’s layered lyrics. This was a heroes’ welcome, and of course it was, given that it was Downie.

Or reduce so many of them to tears, including myself.

I liked everything about it. The singing, the music, Gord's wild costumes. What he had to say about Justin Trudeau. 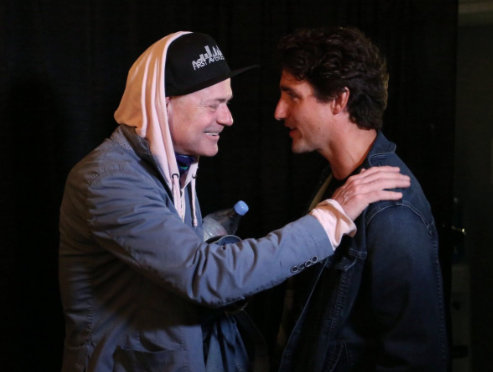 “Well, you know, prime minister Trudeau’s got me, his work with First Nations. He’s got everybody. He’s going to take us where we need to go,” Downie said from the stage.

And what Justin had to say about him... 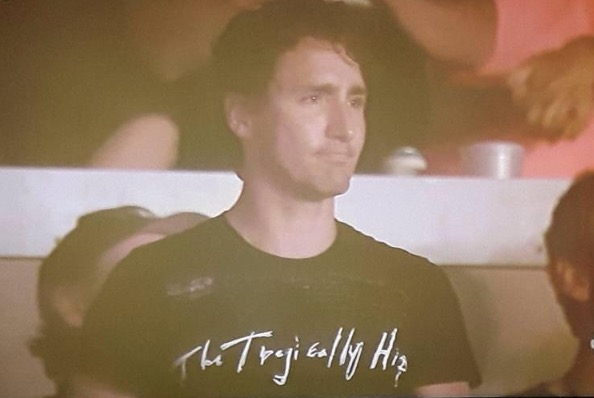 Trudeau told the CBC that the concert represents a way to not only say farewell to Downie, but also celebrate the singer and celebrate Canada. He said the concert was a powerful moment for all Canadians.

So of all the articles about the Tragically Hip's final tour, I think I like this one the best.

Rock and roll has always been in love with death. It’s the genre of the so-called Twenty-Seven Club, the genre of “I hope I die before I get old.”

This summer, in Canada, one band is living that connection fully and completely. Gord Downie, the lead singer of the Tragically Hip, is suffering from glioblastoma, a terminal tumor in his left temporal lobe. But dying hasn’t stopped the tour. Downie is coming out on stage every night to burn out publicly. It has been glorious. 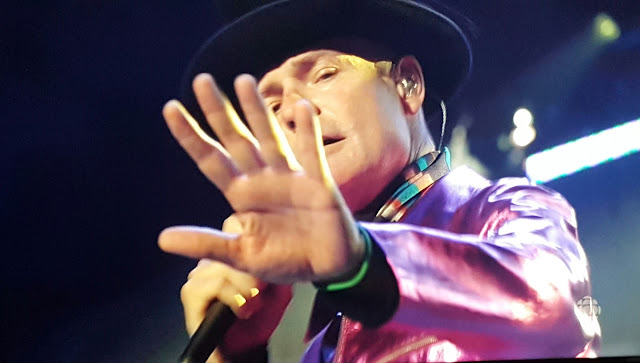 The rapture of the crowd was total. They wanted to be with Downie until the end. This being Canada, though, nobody acknowledged what was really happening.

Downie didn’t speak to us, though he is famous for his onstage rambles. Maybe he was silent because if he started talking, he would have to talk about death and everything else, or maybe it was because there really was nothing to say. During “Boots or Hearts,” one of the band’s biggest hits, Downie laughed and the crowd laughed with him. At times he looked dumbfounded by joy. He was transcendent and he knew it.

You know, like Stephen Marche, I'll never understand why the Tragically Hip were so big in Canada, but all but ignored in the United States.

Why they have never translated to the American audience is one of the great mysteries of Canadian popular culture. I have never heard or read a convincing explanation. Their songs are catchy, and every other act anywhere near their size in Canada has gone on to success elsewhere. But the Tragically Hip belong to the North alone, it seems.

But that's the American's problem, or their loss. They didn't get it, we did. We liked that they sang for and about us, and that's why we loved them so much.

How great that their long musical journey should end in Kingston, where it all began about about thirty years ago... 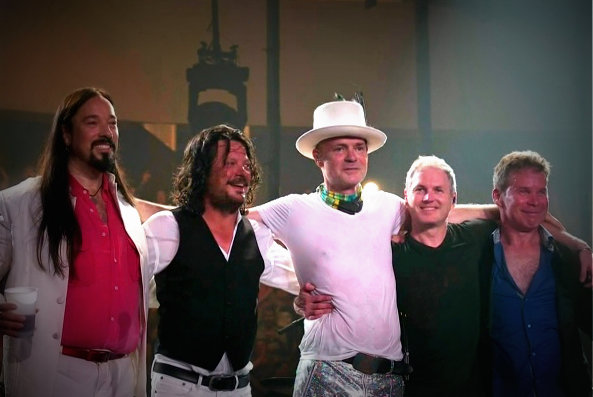 And what a great journey it was.

I hope Justin Trudeau told Gord Downie how proud we are of him and his friends... 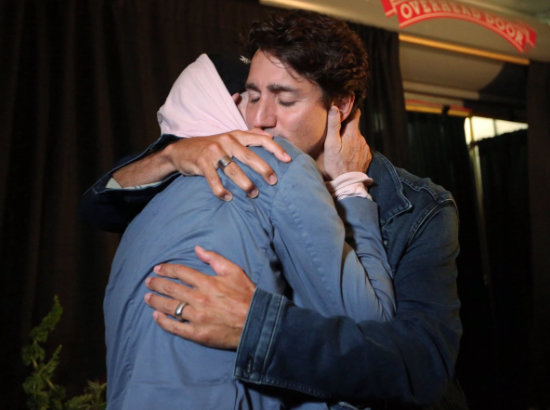 And how brave he is to stare down death in such a joyous and inspiring manner.

I hope he told him that we will never ever forget him.

And that his songs and his poems will always be part of the Canada we love... 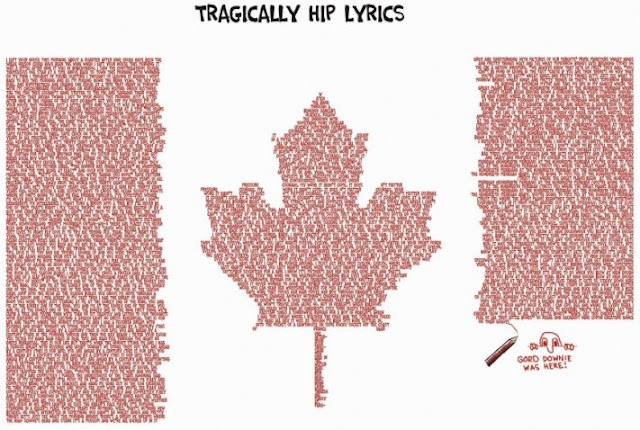 I grew up 70 K from Bobcaygeon. Joined the hip bandwagon about ten years ago. I remember reading in the NYT a review of a Concert where the writer called them the greatest living Rock n roll band or something, and he also puzzled why does America not get the hip. I am somehow at a loss to explain that after the hip, Drake will be our ambassador of culture.

was in kingston last night to watch a man who lives with such love!!! as if all else was part of it - the fear, the good bye, the loss. which, of course, it is. tears still well up in my eyes but i don't really know why anymore. Gord Downie stays in every artist and person who pushes their dream (did he say 13 people showed up to their first gig?) he will forever linger in the reasons why even the confused, apathetic or otherwise preoccupied portion of the canadian electorate understands that the Canadian North MUST have the attention it commands. but most of all, even beyond the music he etched into our brains, it is the maple heart - his love for his country that makes us connect the nebulous parts of ourselves as a country with the things that are personally essential. ha!

i let my tears be real but know that there is neither need, nor time to be sad, 'cause we are never alone and have much to do. so thanks for the inspiration, Gord and right back at you!!!!

thanks for writing about things that matter, simon. cheers.
any ideas where i can get the Tragically Hip maple leaf flag?
lf

I first saw the Hip 20 plus years ago in a small bar in Kelowna BC. They played an old Robert Johnson song - Train Kept A Rollin - as an encore for at least 10 minutes. I hope he keeps a rollin as well.

hi Steve...As I said in my post I don't know why the Hip were not more popular in the U.S. The only thing that can explain it in my mind is that Gord Downie's lyrics were too sophisticated, and that they didn't feel the need to be validated by anybody else than Canadians. But as for Drake being our new ambassador of culture, it's something I'd rather not think about...

hi Luce...lucky you, it must have been an amazing experience. Like more than 11 million other Canadians I was riveted to my TV set, so I can only imagine what it must have been like live. As some police department tweeted, Canada was closed down for the duration of the concert, and it couldn't have been a more unifying experience. But as for the Tragically Hip maple leaf flag I'm afraid I can't help you. But if you find out please let me know, because I want one too.... ;)

hi Grant...that too must have been an experience to remember. And like you, I too hope that medical science, or a miracle, can keep Gord rollin for a long long time....

I was a hipster in my youth (bad pun) and finally ast down to listen to them...a revelation. Songs about hockey, David Milgaard, sea voyages gone bad, love, anger, weirdness. So essentially Canadian and I've listened to them more or less over the years, but they're definitely part of our fabric, like that old sweater you love even though it more or less fits.
And yeah Gordie, we're fine with Justin...though the CPC sure are trying to bring him down. Too bad it isn't working...
Pierre

Like yourself, I didn't quite got the Tragically Hip until I finally went to my first concert, which also happened to be their final performance in Toronto: http://bit.ly/2bhhmUC.

Prior to the concert, I had mentioned to my friend that the Man Machine Poem tour is like this Generation's Terry Fox Run. Rather than running across the country, the Tragically Hip played every song they could to their best ability while also donating some of the ticket proceeds to the Sunnybrook Foundation for cancer research.

Although this is the end of the line as far as touring goes for the Tragically Hip, I really hope the Canadian entertainment industry can pool together and do one massive telethon to help Gord raise more awareness and funds for brain cancer research.