The Day Donald Trump Went Over the Deep End 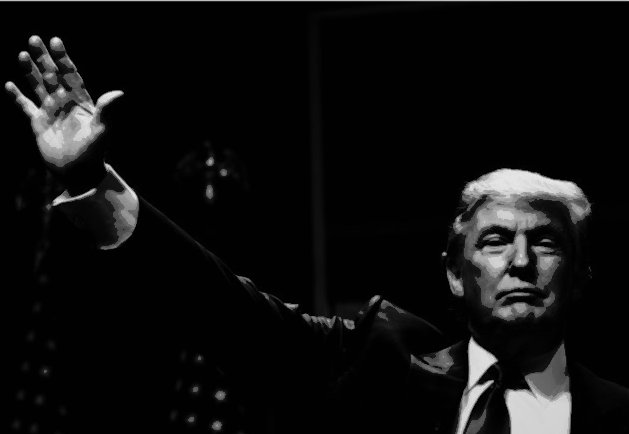 He was already the most dangerous demagogue ever to run for President of the United States.

He is a foul bigot, a creepy misogynist, a bloated narcissist with delusions of grandeur.

He has exceeded the bounds of human decency over and over again.

But now Donald Trump has finally gone too far. 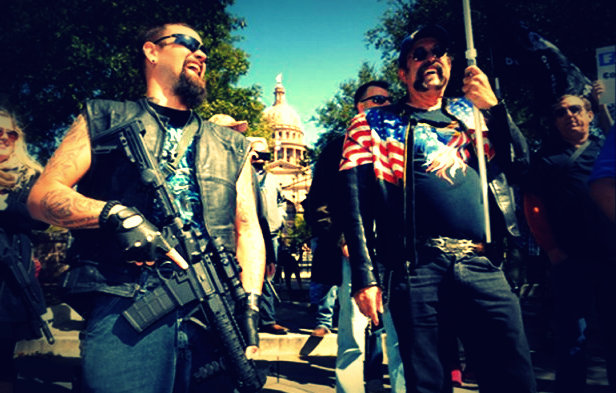 By seeming to suggest that the gun nuts in the U.S. could assassinate Hillary Clinton.

Donald J. Trump on Tuesday appeared to raise the possibility that gun rights supporters could take matters into their own hands if Hillary Clinton is elected president and appoints judges who favor stricter gun control measures to the bench.

“If she gets to pick her judges, nothing you can do, folks,” Mr. Trump said, as the crowd began to boo. He quickly added: “Although the Second Amendment people — maybe there is, I don’t know.”

Mr. Trump’s campaign events and rallies have grown increasingly vitriolic, with angry chants and jeers directed at Mrs. Clinton, some of them led by the candidate himself. On Tuesday, Mr. Trump called Mrs. Clinton a “liar” and “wacky.”

Chants of “lock her up,” which first gained traction during the Republican National Convention, were loud and frequent in Wilmington before Mr. Trump took the stage.

When his rallies are hate fests, and as I showed you the other day, nothing sums up his campaign better than this bestial poster. 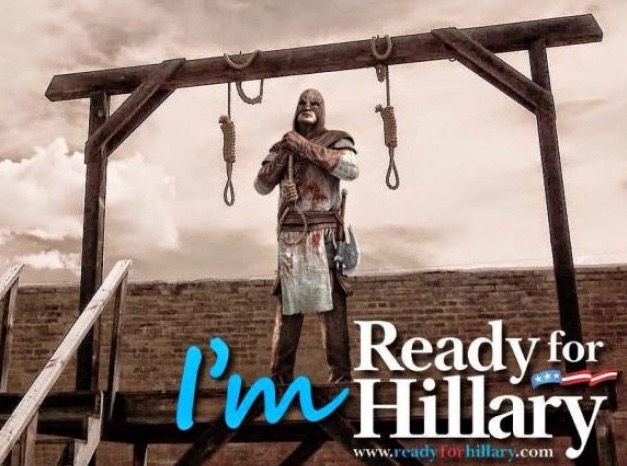 He is indeed leading America even further into the muck.

Three months from the presidential election, and one day after his running mate promised “specific policy proposals for how we rebuild this country at home and abroad,” Americans find themselves asking whether Donald Trump has called for the assassination of Hillary Clinton.

This is the bottom line:

Seldom, if ever, have Americans been exposed to a candidate so willing to descend to the depths of bigotry and intolerance as Mr. Trump. That he would make Tuesday’s comment amid sinking poll numbers and a wave of Republican defections suggests that when bathed in the adulation of a crowd, Mr. Trump is unable to control himself.

And for me, as it is for one Times' reader, this is the burning question:

Why did the Secret Service not take Mr. Trump out in handcuffs? Any other American making the statement he made implying that someone could shoot Mrs. Clinton would be in handcuffs in the back of a police car, explaining their intent. Why does this disturbed individual get a pass?

This is somewhat encouraging...

Elizabeth Warren is right, as usual...

And this must be the chant of all decent Americans:

The beast is unfit to be President.

And he must be sent to the place where he belongs... 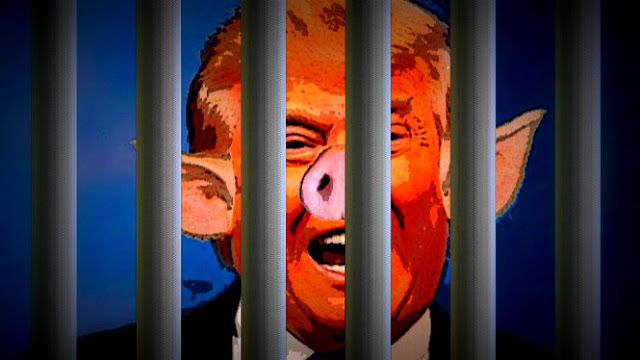 Actually Simon what Trump seems to have actually said was ambiguous and could be shoot her or just make sure every NRA member and every other gun nut do everything they can (legally as far as such there is such thing in an American election) to defeat her.

Trump may not even realize he said it. That narcissistic a personality is not the most self-aware.

Personally, I'd say the DP is being really, really, dumb but then so far in this madhouse, err I mean election stupidity and dumb moves seem habitual.

Unfortunately, Donald Trump is not the worst choice for the U.S. Hillary - the well-paid shill - for billionaires is even worse. The tough thing to face is that the American political system is broken and it's not going to get better.
The U.S. is now an aristocracy made up of a handful of billionaires. And it's going to get worse not matter who is elected. Here, in New Brunswick, you can see the same rule by aristocracy - and it's not nearly so pure as people think in the rest of Canada. Leaders in all this are the news media - almost almost of which are owned by the aristocracy.

JKR: I took it that Trump was referring to action after Clinton wins the election.

Ah, I never thought of that. You could be right. Personally I don't think he knows what he meant: It was just part of his usual stream of consciousness ramblings.

On second thought, I don't think even Trump is that stupid, or is he, because if Hilary was assassinated after the election the USA gets Kaine as the replacement. And he seems rather sane and a better deal than Hilary or Trump.

Of course you still may be right. Trump may not be that stupid but as he was rambling along it might not have occurred to him.

I am in total agreement with you Graeme Decarie

Hi Graeme...Hillary Clinton may not be the ideal candidate, but she is better than Trump the racist, the misogynist, and the hopelessly incompetent buffoon. And this post is about a candidate making death threats against another. So I find it surprising that you would forget to mention that. Also I am not as pessimistic as you are about the future. Bernie Sanders and his movement showed that there are a lot of mainly young people who want real change, and in the next few years they will get a chance to do just that. It's called generational change and nothing will resist it...

Hi JRK...If Trump didn't mean what he said, then he is too incompetent to be President. If he did he should be arrested. Period. Inciting violence in a place like the United States is playing with fire, and criminally irresponsible....

Seems that conspiracy theories must fascinate people as we are now speculating what Trump might have meant even though it was unclear if he actually meant she should be assassinated.

Personally, I suspect that whatever he meant, he meant it as a joke, albeit a bad one, to get laughs. First, he is an entertainer so he thrives on audience reaction. Second, he seems highly insecure, cue his sensitivity about the size of his fingers. John Oliver even had a highly entertaining segment on this insecurity in regard to his finger size on Youtube.

But since we apparently enjoy conspiracy theories, here is one that is potentially more serious because if it is true a crime had been committed. For those who are not so familiar with U.S. politics, there had long been rumors about how people who find themselves on the wrong side of the Clintons end up "disappearing". Today's conspiracy story does fit into that line, so enjoy: https://www.rt.com/usa/355361-murdered-dnc-staffer-assange/

Graeme: John Pilger, an Aussie journalist based in London, England who had won multiple awards for his work had publicly and repeatedly said that he considered Hillary much more dangerous to the world because of her warmongering than Trump. Eric Margolis, another very well known and lauded journalist who had reported on the middle east wars had long criticized the neocon American warmongers from both the Republican and Democrat establishment (Hillary clearly belongs to the latter). Margolis actually thought that it was good that Trump was standing up to the establishment. Also, look who just publicly endorsed her - Morell, former CIA deputy chief, who had said that the Iranians and Russians must be killed (covertly) in payment for what they did in Syria. Just to be clear, I am not saying that Trump is better than Hillary. I am saying both are unfit.

Heard what Trump said and interpreted it to mean: those who support the NRA and various rulings regarding the second amendment can change things by shooting Clinton and any justices she might appoint and if you want to avoid Clinton appointing justices, shoot her now.

There are enough gun nuts in the U.S.A., that any one with a brain would know what Trump said isn't smart, even if he said it only jokingly. there is almost a mass shooting per day in the U.S.A. We only get to hear about the really bigger ones.

Some may not like Clinton, but she is better than Trump. Remember Trump's comments regarding Muslims and Mexicans. Can Jews, Catholics, teachers, opposition politcains be so far behind. Clinton's foreign policies might not have been the best or the greatest but have your heard Trump: why can't they use the nuclear button?

The world will most likely survive under Clinton, with Trump as president, I'm really not sure and wouldn't take a chance.