The Ambrose Cons and the Trudeau Derangement Syndrome 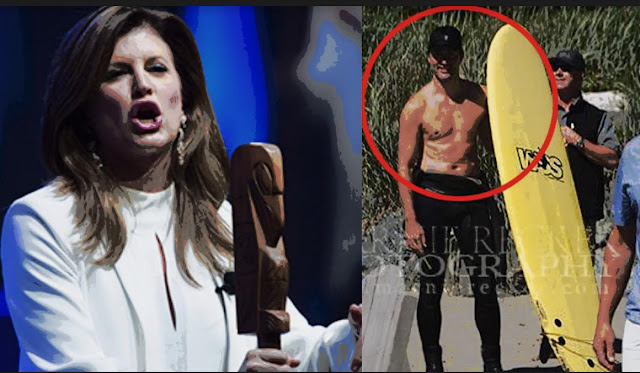 I've written about how disgusted I am by the way Rona Ambrose and her Cons have been going after Justin Trudeau for daring to take his shirt off at the beach.

Or daring to take a vacation... 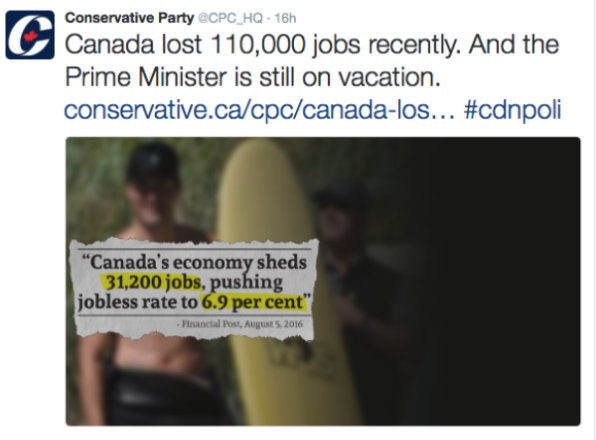 And have been using that as a fund-raising opportunity.

Even though Ambrose couldn't be more hypocritical. 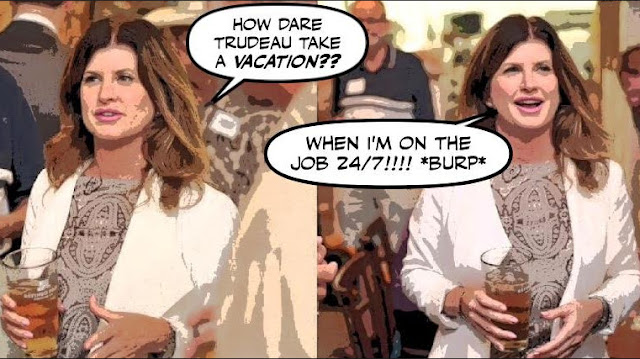 But this is the absolute limit.

The photographer who took the picture of Trudeau demands that the Cons stop using it in that attack ad.

Only to have the Cons use her legitimate complaint to make themselves look like victims, and fund-raise some more... 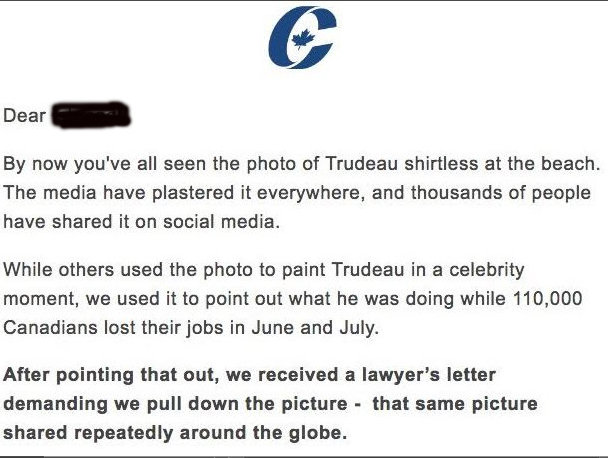 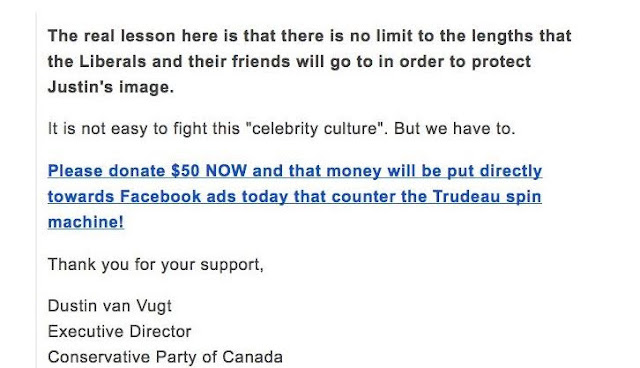 And yes, as Elias Weiss writes it is just the latest case of Trudeau Derangement Syndrome.

This is not an isolated incident. No, the Conservative Party of Canada suffers from acute TDS, also known in select medical journals as ‘Trudeau Derangement Syndrome’. A truly devastating political illness that renders its sufferer irrationally whiny and miserable.

Easy to diagnose, difficult to treat, the most notable symptoms commonly observed in parties with TDS are a deep-routed persecution complex, spiteful and disorderly behaviour, a profound detachment from reality and professional embarrassment.

This fascination with Trudeau's body and his sexuality is not doing the Cons any favours.

When the CPC runs around, their hair on fire, arms flailing, screaming bloody murder about the littlest things, it becomes difficult to then take them seriously. It would have been very easy for them to criticize Trudeau, legitimately or not, for the job losses without resorting to personal attacks, just the way Ambrose could have praised her friend Laureen Harper without attacking Sophie Trudeau, or praise trailblazing women in politics without making a strange ‘joke’ about the Prime Minister’s masculinity.

It is making Rona Ambrose look like a pervert... 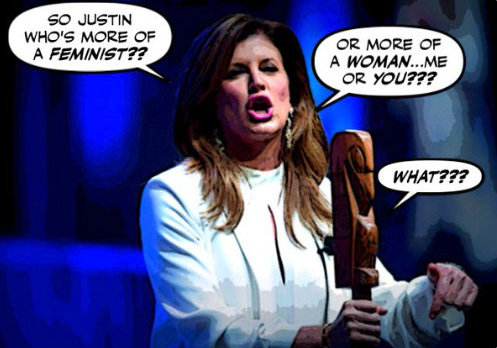 It's not making the Cons more popular.

And yes enough is enough.

You know I spent most of yesterday visiting some friends in Inverness, the so-called capital of the Scottish highlands... 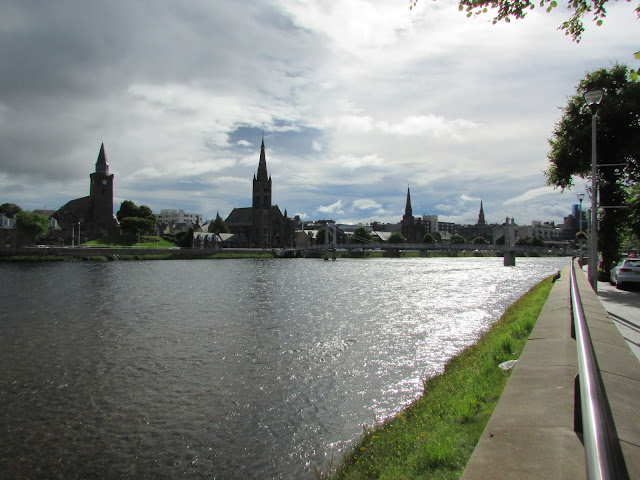 And everyone who had heard of this story.

Thought it made Justin Trudeau and Canada look really cool.

And I'm sure when they hear about this story. 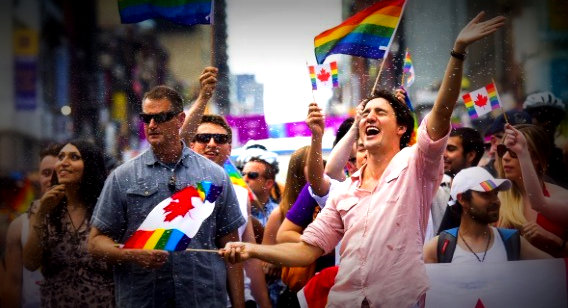 They will think we're even cooler.

If Rona Ambrose and her Cons, and all the other disgusting old Trudeau haters in Canada don't understand that, they understand NOTHING.

The future does not belong to them.

They're dead and they don't know it. They smell of decomposition.

And this is where they are going... 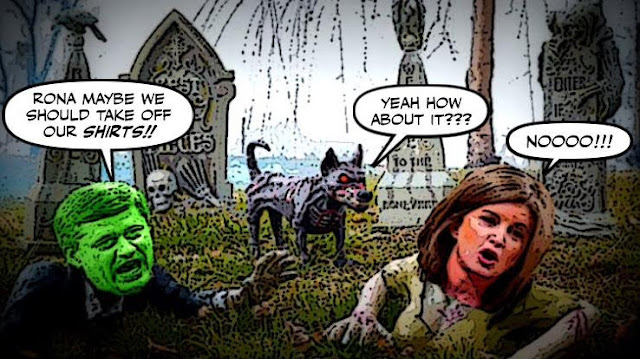 Another puff piece from the Toronto Red Star. So how about all those job losses? We can't hold Slick responsible he's oh so dreamy, let's blame it on Harper instead.

While I agree Trudeau looks good shirtless, I am quite disappointed in his performance as our leader to date. Voted for Change.....Got much of the Same. Unemployment rates are up, TFA's being recruited by John McCallum, Bill Blair (another idiot like Fantino) heading up the Marijuanna legalization LOL LOL we know that issue is not going anywhere, except a new opportunity for a few Corporate HOGS of the LIEBERALS!!!!!! CRA Mafia using even more of our middle class tax dollars to attack the middle class whilst the real tax fraudsters are protected by the LIEBERALS. A government that is becoming as nontransparent as the previous. The only way you can speak to LIEBERAL is if you want to donate. Otherwise they will hang up on you if you call and ask a question about their leadership!!!!!! Been there, done that!!!!!!!!! I can understand how your friends in Scotland heard of him because while he is popular on the world stage whilst not doing much in Canada. Meet the new boss, much the same as the old boss!!!!!!!!! Adding up to be the same self serving regime as the last!!!!!!!!! Hope you are having a great vacation Simon. FS

Hi anonycon....you sound bitter, and goodness knows when I look at that latest poll I don't blame you. It took progressives a long time to clean house, but now that we have, we are going to make sure that they never form a government again. Any job losses are the fault of the Con regime for having destroyed our manufacturing base with their oily obsessions. And if you call Trudeau "Slick" you must be one of the Con followers of the miserable Mound of Misogyny, the virulent homophobe who I intend to expose once and forever as soon as I return to Canada. Progressive Bloggers is smelling too Con these days and I intend to change that...l

Hi FS....you need to get out more., and see Canada as others see us. Trudeau and the Liberals can't walk on water, but in less than a year they have gone a long way towards demolishing the foul legacy of the pervert Harper, and made Canada look a lot more like Canada again. So although I didn't vote for them, and they can always do better, I'm grateful for what they have achieved, and happy that when I travel I don't have to wear a bag over my head....

a bare chest and a pink shirt are hardly the core issues
is this still highschool?
being a fashionista couple with kids
is hardly leadership
nothing of substance has been revoked from exactly what harper set up
i hesitate to criticize Trudeau
but only because he has done nothing yet but change the music and window dressing

So true Simon. People being spat on for displaying a Canadian flag was Harper's legacy as a war mongering, tin pot dictator. Repairing the damage he's done will take time in the eyes of the world but we're headed in the right direction with JT. As we gain more favour we to shall gain more business which will lead to a robust, diverse economy not solely dependant on big oil.
It took 10 years for Harper to inflict his damage and I'm prepared to give JT a couple of more years to turn it around.
JD

It took 10 years for Harper to inflict his damage and I'm prepared to give JT a couple of more years to turn it around.

An excellent point. I have been impatient for the Federal Gov't to do things but when you point out the time frames I suddenly realize that "Rome wasn't built in a day" and that some policy moves cannot changed in an instant.

Come to think of it, the Cons did make changes "in an instant" and they were usually disastrous.