Horror Show: When Ezra Levant Teams Up With Jason Kenney 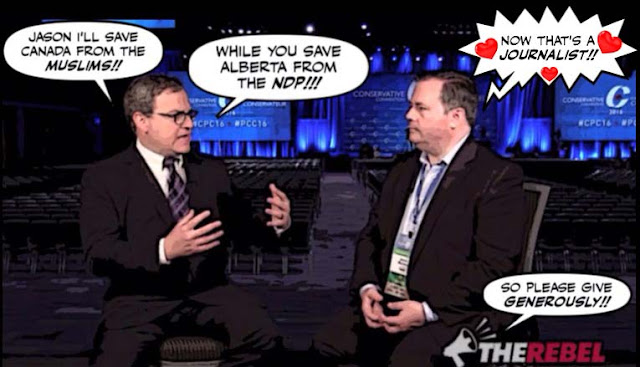 At first glance they may seem like an odd couple. And it's not a pretty sight.

But if you think about it, it really is a match made in Con heaven.

Because as we all know Ezra Levant and Jason Kenney have a lot in common.

And as for the ghastly Rebel Commander, he can't do enough to help his buddy Jason "liberate" Alberta. 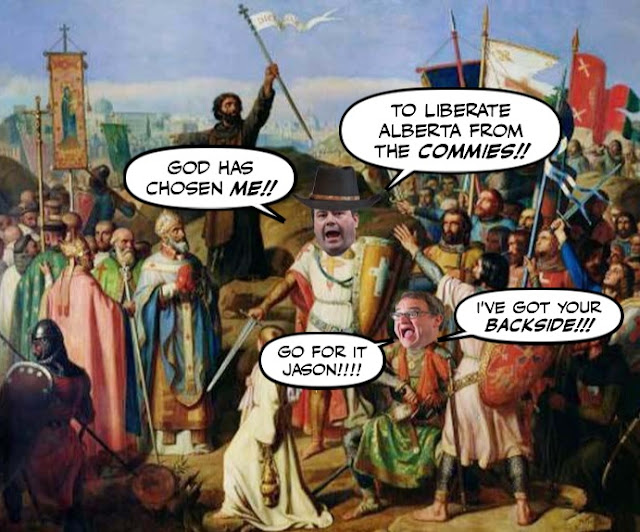 Even if that means encouraging his foul flunky Sheila Gunn Reid to go after Kenney's opponents in the most disgusting manner.

Watch out, Alberta Tories! If you don't support Jason Kenney's bid to lead Alberta's Progressive Conservatives, some of Kenney's allies might launch gender-based attacks on you.

Shortly after, fellow Rebel personality Sheila Gunn Reid took to her YouTube soapbox to tar-and-feather Quest, denouncing him as a Liberal and even taunting the former MLA for losing to a "gender-queer Colombian immigrant" during the last election.

But then why should we be surprised that it's such a horror show?

When Sheila Gunn Reid, the Rebel's "Alberta Bureau Chief" is as ugly as they come... 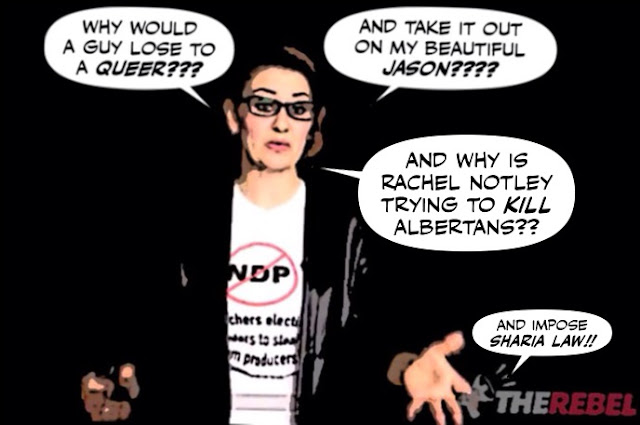 A hate hound if ever there was one, and certainly no journalist.

When Kenney talks about "social engineering" in Alberta's schools, he is blowing his big fat dog whistle to let his followers know that he is opposed to plans to protect LGBT kids from bullying.

And of course the Rebel Commander himself never misses a chance to promote division and bigotry. 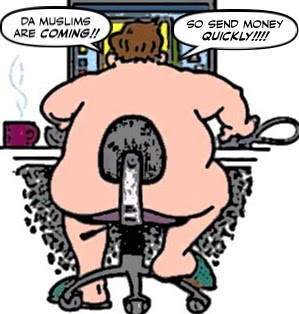 So Press Progress' question is a good one:

Is Jason Kenney cool with people associating his name with this kind of negativity?

And so is this one:

Why would Kenney appear on a hate mongering site that runs that kind of garbage, and so many comments like these?

And the answer to that question is simple.

Levant and Kenney may be an odd couple.

But they do resemble each other... 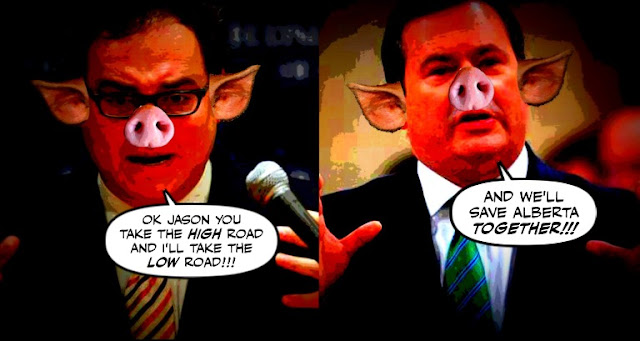 And Alberta won't be safe, and this country won't be truly decent, until the day they are deposited in the garbage can of history.

Where they both belong...

I'm horrified by the comments I read at the Rebel, how is it that law enforcement isn't looking into some of these nutbars considering all the threats of death and violence that are regularly thrown around there? What is going to happen if one day someone does take a shot at Notley, Trudeau, or someone else they despise and god forbid, actually succeed? Will Levant take responsibility or will he blame a lone wolf, denying his site, among others like it, have contributed to the fervor that leads to things like this?

I'm curious as to how many subscribers Therebel.media has. According to Alexa.com looks like they have an average of 35,0000 hits a month. http://www.alexa.com/siteinfo/therebel.media I wonder how many actually pay the monthly fee.

I suspect Jason Kenney will one day seek Harper’s job, but it’s hard to be sure, in part because he’s a bachelor — married to his job, they say. That’s his private business, but voters — especially the family-values voters who would form Kenney’s base — generally like their leaders to have a spouse. (i.e. he's gay).

Alberta will not be safe unless their citizens ignore the racism and bigotry the CONS are spreading their own province. If they are that naive, they will get their just reward. The rest of the country will be fine with the exception of maybe SK!!!!!! Alberta is a cesspool of bigotry, the stench of CONS, and dirty tar ponds. Would not compare the rest of our great country to that province. Levant and Kenny are not an odd couple......they deserve eachother. A perfect match finally for "bachelor" Kenny!!!!!! FS

Hi FS...one can't condemn an entire province for the actions of some. There are a lot of good people in that province, it's just that the bigots and other beasts make more noise. And always remember the future belongs to us...

Hi Joe...I am horrified too. I don't accept that death threats should be tolerated in Canada. I know that at least one of those crazies was talked to by the police, because he was complaining loudly on Facebook that his rights had been violated. But police need to be more aggressive. In Britain where hate laws are strictly enforced, Levant and most of his shabby gang would have been jailed a long time ago. There is no room for violent hate in Canada if we want to make this country an oasis of sanity in an increasingly crazy world...

Hi MC....good question. I have no idea how many people fork over $ 8 a month. My guess is not too many. For even though it's not much, that site isn't worth much either. Levant is a hate monger who is peddling the same kind of stuff you can find all over the Internet for free....

We seem to forget that Albertans gave Rachel a majority mandate. The far right minority whackjobs can howl at the moon all they want and it wont change that, but what it will do is expose these lunatics for what they are and trust me, they are being monitored quite closely.
So think of Ezra as the useful idiot who allows these lowlifes to use his gong show as a vessel to spew their hate and threats. Smile assholes! You're on candid camera!
JD

Sure Sheila and David Menzies are terrible but they do have a couple "stars" on their website. Lauren Southern is close to 100k followers on Twitter and Gavin McInnes is quite popular too.

hi JD...yes, the lack of respect the redneck Cons have shown the excellent Rachel Notley is absolutely appalling. And let's hope Ezra Levant's violent hate mongers are being closely monitored, for they are exceeding the bounds of decency, and are in my opinion guilty of criminal behaviour. But then they are desperate, and they will learn the hard way that hatred will get them nowhere...

Kenney is definitely a cancer Alberta does not need. I did email him to ask him specifically where in the Alberta curriculum the social engineering he blathers on about is even mentioned since I have 10 years of teaching under my belt, much of it dealing with the Alberta curriculum. Perhaps not surprisingly, I haven't heard back from him. This is part of what makes Kenney so toxic, in my view as he will continuously spout out vile, non-sensical crap but will never respond when someone calls him out on his bullshit. It annoys me to know end that Kenney must think all Albertans are just a bunch of uneducated oil workers who will swallow anything. THIS Albertan is an oil worker with 3 university degrees and I certainly WILL not buy his bullshit and will continue to challenge this clown.

hi Way Way Up....good for you for e-mailing Kenney to ask him what he's talking or blathering about. And I'm not surprised he didn't reply, because he knows very well that his nasty little dog whistle is all about making life harder for bullied children. But yes, he must think Albertans are idiots, and that he can get away with anything.
Good luck to you and the other good people in that province, and may Kenney's foul campaign be his last....