Donald Trump and the Emperor God 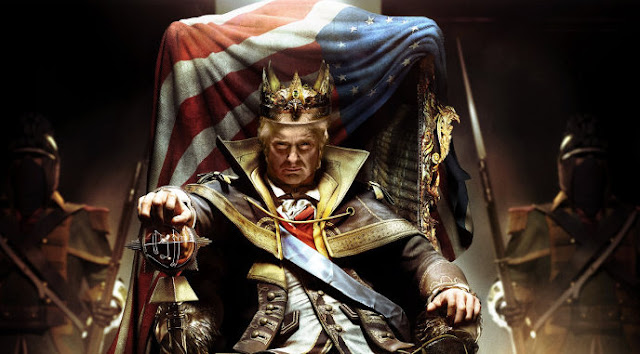 There are now 100 days to go before the American election, and we find out whether we will be condemned to live in Donald Trump's nightmare world.

Or whether Hillary Clinton and her progressive army, will be able to bring down the man some of his crazed followers are now calling the God Emperor.

For it is as the Globe says, a choice between sanity and insanity.

The 2016 U.S. presidential race is not like elections past. It is not just a choice between right and left. The old borders are being redrawn by the parties, and by a restless, cranky electorate. No, the cleavage this year is different, and deeper. The line of demarcation is stark. It is no exaggeration to say that the choice in November is between sanity and insanity.

And that dangerous demagogue has never sounded so deranged.

For this is how he reacted to Hillary Clinton's fabulous convention... 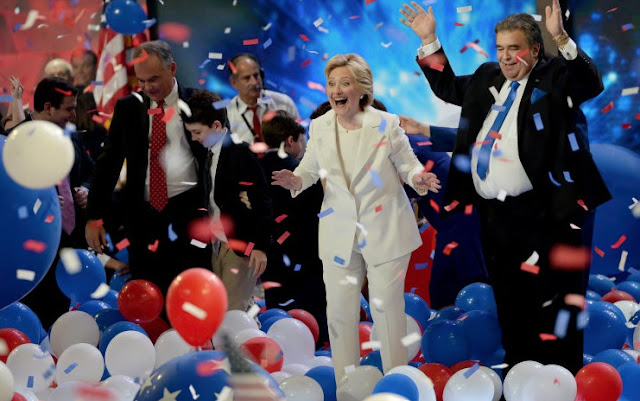 Which made his convention look like a ratty dog and pony show.

Or a low budget Nuremberg rally.

With a stream of tweets each one crazier than the other.

A threat to beat up some of those who dared criticize him.

“I mean, the things that were said about me,” Trump told the crowd. “I was going to hit a number of those speakers so hard their heads would spin, they’d never recover!”

And as if that wasn't insane enough, as his rabid followers chanted "lock her up," by vowing to stop being a "nice guy."


Which should be enough to have that ghastly bully arrested, or confined to a mental institution.

But don't tell that to some of his crazed followers, for they really do believe he is the God Emperor. 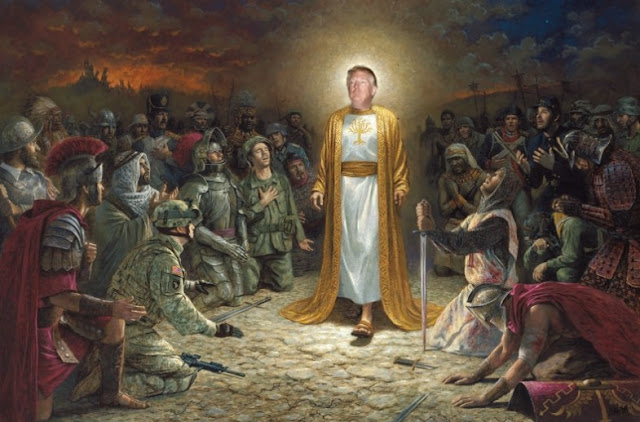 Hundreds of posts in Reddit’s The_Donald forum ― where Donald Trump this week participated in a Q&A session ― refer to the Republican presidential nominee as “God Emperor.”

“We know he can’t literally be one,” wrote member NewJersey908, but the phrase whips people “into a frenzy saying that we literally want a dictator.”

For while some on that site might be attempting to be ironic, many are neo-nazis... 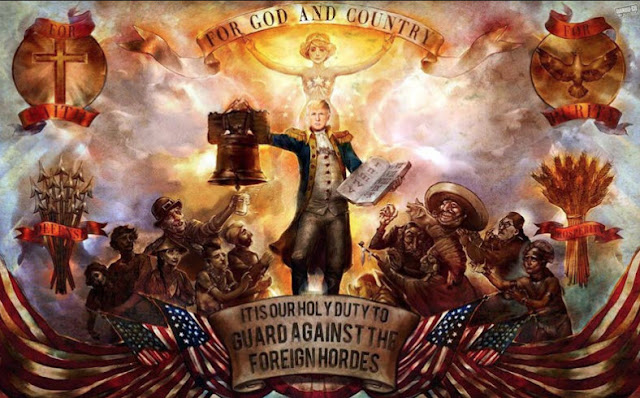 The site, which is more popular than the one dedicated to Pokemon Go, is filled with violent images of Hillary hate... 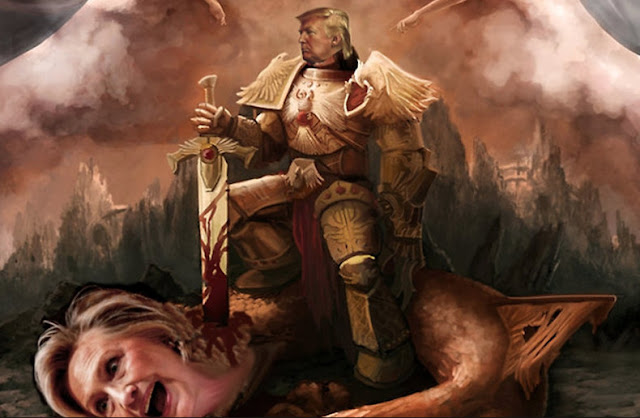 Which only makes sense since Trump's religious fanatic of a running mate is vowing to destroy women's rights.

“I’m pro-life and I don’t apologize for it,” he said during a town-hall meeting. “We’ll see Roe vs. Wade consigned to the ash heap of history where it belongs.”

As well as exterminating gay rights, and triggering a race war in America.

Which in turn only makes statements like this one even scarier. 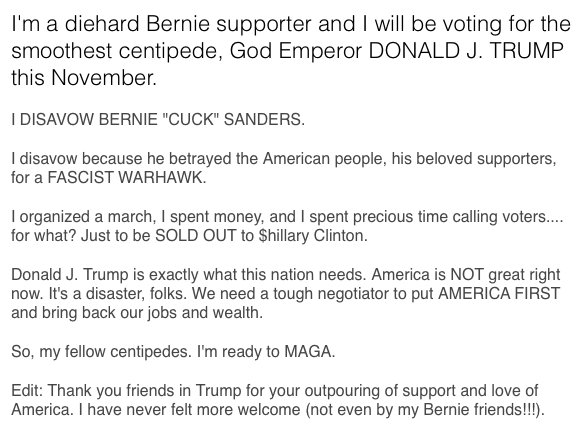 For any progressive who might consider voting for Trump is as deranged as he is.

And just as dangerous... 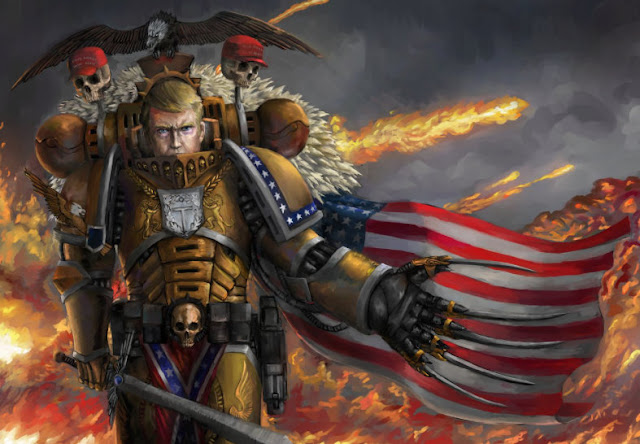 Because it really is a choice between sanity and insanity.

The fate of the world really does hang in the balance.

And that dangerous fascist maniac must be defeated.

Before he destroys us all...

At this point in time it could good either way. IMO the election is too close to call. A lot could happen between now and November. I really don't want Hillary to win. The Americans have never had any president (as long as I've been alive) looking out for their best interest, it's all about money and power. Do you believe Hillary genuinely cares about people? I think she just cares about well... money and power. I don't truly think she believes in the progressive agenda, she's just saying what people want to hear.

I care about gay rights, women, minorities, undocumented migrants sounds great on paper. That's what's hip these days. Hypothetically speaking if she were to run 40 years ago and the status quo was different she'd go along with that instead. Whatever works. If you look back on how she felt about gays 20 years ago... I'm sure you're well aware of this.

Trump does come off as a brash dictator sometimes. The other half he's putting on a show. Grab the popcorn. I think many Americans are angry and feel they've been screwed over and he's channeling that hurt and frustration. I totally understand your concern. Many bigots and racists and otherwise not very nice people will vote for Trump.

I don't think he's going to "destroy us all". He's not a monster. He has a heart, a family, people he cares about just like you and me.

The reddit pages, memes, and Emperor Trump and all that junk is just a bunch of bored teenagers, trolls, and troublemakers.

Anyhow that's how I feel. But what do I know, I'm just a conservative english guy from Quebec.

i don't think the machine will let thedonald call his own joke at the end of the finish line, so we could hear something about health or family reasons why he can't fill those shoes. maybe the machine will own up and say it's been wrong all along (i am not holding my breath).
but it seems to me that there will be some sort of a choice thedonald will have to make the 'day before'. one that will benefit him, not others.

Trump is a blowhard, not a fascist. Anyone who thinks this guy is similar to Hitler and Mussolini are ignorant of history.

Is it dangerous putting Archie Bunker in the White House? Certainly. But America is not like Canada, where one person (an indirectly elected prime minister) owns the country. They have checks and balances. Three legislative branches of government. Mid-term elections. An impeachment safety value. The country is the most anti-fascist on the planet having a 2nd amendment whose entire purpose (albeit anachronistic in form) is to prevent a tyrant from seizing power.

The only reason the establishment is inciting hysteria over Trump is because he opposes free trade and the outsourcing of American jobs.

If there is a progressive army behind Hillary they are dupes. Hillary has already sold off the government. Her Wall Street bribes ensure corrupt bankers write the banking regulations (last time around they caused a global derivatives meltdown predicated on an astounding web of fraud.) Her bribes from corporate agglomerations ensure the TPP is good to go (and the 8-year Great Recession will grow worse.) Her bribes from the military industrial complex ensure wars (cold and hot) against Islam and Russia (they pay by the bomb.)

Hillary represents business as usual. And this business -- oligarchs looting global wealth instead of investing in people to create wealth -- is destroying the global economy. Another financial meltdown and fascist revolutions will break out, along with world war and the Anthropocene.

Progressives must send the Democratic party a message: if you won't represent our votes, we will find someone who will. That person is Jill Stein.

Let's hope progressive Americans vote with their heads and their hearts!

Thursday night speeches from DNC were absolutely what the world needed to hear. Speech after speech, it just got better. To finally hear Chelsea Clinton after all these years was just amazing. To finish with Hilary was brilliant. I think she has found her voice. She's owning everything about herself, and it's beautiful!

One can only imagine Trump quaking in his knock off Gucci's. The world needs to keep yanking his chain. He's in self destruct mode. Even Putin must have some pity for this freak show.

As for his "followers", the numbers could be like his wealth estimates. Fraudulent and highly exaggerated.

I dont remember Truman but Carter was a good one.

Here is an article that looks at one of Hillary Clinton’s legal cases that gives us an inside look at the “real Hillary”:

One of Ms. Clinton's personality traits tells her that she must "win at any cost" no matter how it impacts the lives of others.

The Economist ranks a Trump win as a global threat to the World and USA economy. Only Clinton can beat Trump. So all you Gary Johnson, Jill Stein and Anti Clinton fans can get bent. DN

hi MC...Donald Trump is a clown, but he is also a hideous bigot, a vulgar misogynist,
he has dangerously authoritarian tendencies, his grasp of world affairs is scarily simplistic, he could trigger a recession and/or a nuclear war. And by stacking the Supreme Court he could do great damage to the rights of women and gay people. So he must be defeated...

hi Luce...I'll take that wild bouquet of hope. ;) I confess I am worried that America has become such a tormented society, that anything could happen. But I am still confident that Trump's personality will be his downfall. I'm pretty sure that most progressives will unite to meet that threat, and an even willing to predict that Clinton will end up winning by a healthy margin...

hi anonymous 11:05...Nobody is comparing Trump to Hitler, but the man has fascist tendencies, he is a foul bigot, and a misogynist, he is making it up as he goes along, and on the world stage he is nothing but a dangerous clown. The real dupes are those who think he would keep any of his promises, and think that a billionaire would lead a revolution. And voting for someone like Jill Stein is either a wasted vote or a vote for Trump. It is a choice between sanity and insanity, and that dangerous demagogue must and will be defeated...

hi TS...yes I thought the Democratic convention showed off the best of America and the strength of diversity. While Trump's convention was a ratty gathering of crazies and angry old white people. They are not the future, they are death warmed up, and I remain hopeful that they will be crushed like bugs...

hi DN...well I'm glad somebody agrees with me. ;) I simply can't believe that anyone who calls themselves a progressive would even think of supporting that bloated Emperor God. It would be madness and it's not going to happen...

*And* the people who support him are clowns and/or hideous bigots. Vulgar misogynists who likely harbour dangerously authoritarian tendencies. Their grasp of world affairs? Scarily simplistic. Trump must be defeated so they are defeated. End of sad story.

There are two unfortunate truths to this year's US elections.

The first is that neither Trump nor Clinton are fit to hold office. One is an arrogant blowhard with a limited understanding of how things work. The other is a corrupt warmonger owned by Wall St.

The second truth is that only one of the two can lose. It is an open question as to which one is more dangerous for those of use who aren't yanks.

if that is your opinion of her, how does she differ from Trump or so many other politicians. at least she isn't going to take away a woman's right to chose.

Trump wouldn't have the balls to actually hit Bloomberg. That guy maybe short but he is tough. As Bloomberg said in his speech, he didn't start his career with a million dollar cheque and he's from New York and he knows a con when he sees one. You have to admire Bloomberg for crossing party lines to do the right thing for his country. He understands if Trump were elected they would all be in trouble. Most who value democracy and their country will be voting for Clinton.

Wow....are you retarded?You're being trolled.The United States doesn't have an emperor dipshit and if we did we wouldn't elect them,they would be born to power or seize it like all others.We are all armed to the teeth and crazy as all hell...an emperor wouldn't last a hot second here so relax.It's intended to rile up leftist dimwits.

Haha, too bad for you then.