Will Jason Kenney Help Boost the NDP in Alberta? 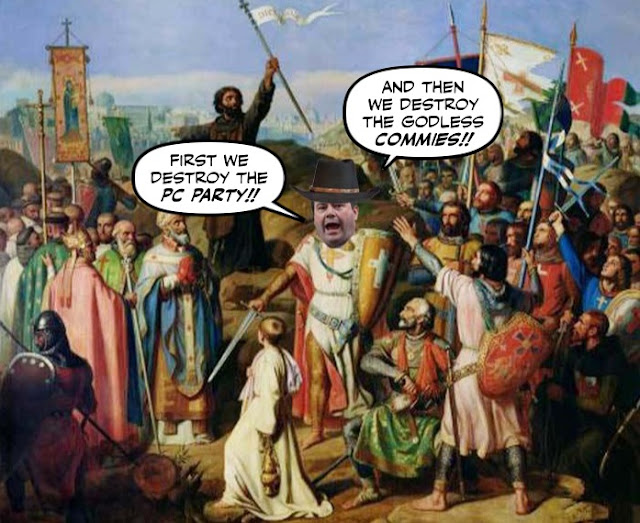 As you know Jason Kenney's crusade to unite the right in Alberta and destroy the NDP, has gotten off to a disastrous start.

His obvious plan to take the "Progressive" out of the Progressive Conservative Party of Alberta has many PC supporters up in arms.

Stephen Harper's endorsement of Kenney at a Stampede event attended by lots of Wildrose Party supporters, offended many of them.

And that has some political observers wondering whether that ghastly religious fanatic will unite the right, or destroy it. 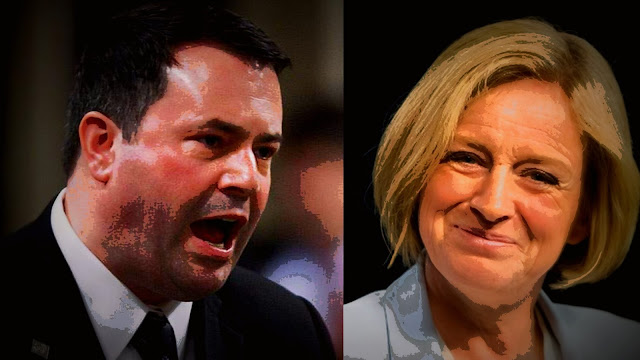 Or at the very least, end up boosting Rachel Notley's chances of winning the next election.

Jason Kenney joined the Alberta PC leadership last week with all of the subtlety of a tornado. So it wasn't surprising that Kenney's opponents were already at full boil when he strode up to the podium and announced it would be "a walk in the park" to unite the right and lead a unified conservative party to victory.

There was, however, one person who seemed pretty calm at the notion of a Kenney-led united right: Premier Rachel Notley. She has good reason. By vacating the centre to unite the right, a Kenney-led Conservative Party could set the stage for a generation of NDP governments.

For the cowboy province has changed a lot since Kenney left it to join the Harper Party, and hit the banquet circuit... 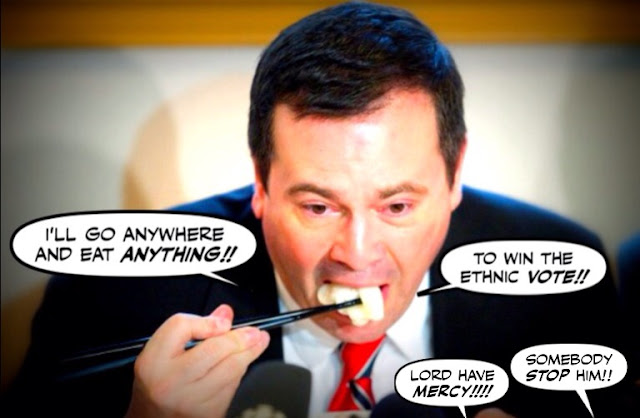 And since that grubby Con hasn't changed a bit, he may not be up to the challenge.

The challenge is, if you're going to start adding votes together, it doesn't quite appear to be the open-and-shut case Kenney implies it is — the "left" and the "right" were fairly evenly balanced in Alberta last election – about 50 per cent each.

If you come into your leadership election with a central critique that the PCs lost their way and became too left wing, you'd better also believe moving to the right won't cost you a single vote because otherwise that leftward flank starts to look exceptionally vulnerable.

And the reason he can't change is because he will always be a right-wing extremist. And will always cater to the needs and desires of people like these.

The leader of a right-wing anti-abortion group is calling on the group's supporters to buy up memberships in Alberta's Progressive Conservative Party as part of a "strategic" plan to help make Jason Kenney Alberta's "pro-life premier."

In a recent message to supporters, Alissa Golob, head of "Right Now," an organization "formed to nominate and elect pro-life politicians," tells supporters to go out and "buy a PC membership" so "you can vote for Kenney."

Who needless to say don't represent the views of most Albertans, but will make it easier for Kenney's opponents to portray him as a right-wing extremist.

Kenney appears to be particularly vulnerable on this front. His decades of hardline conservatism provide an exceptional amount of fodder for his opponents.

It doesn't take a lot of imagination to piece together a 2019 NDP attack ad using Kenney's own words to portray him as totally out of touch with the Alberta majority and set the election as a referendum on civility.

Which shouldn't be too hard, for he has always been, and will always be, a religious fanatic, a bully, and a bigot.

And since Tom "Strangelove" Flanagan has helpfully reminded us how Stephen Harper united the Canadian Alliance and the Progressive Conservatives... 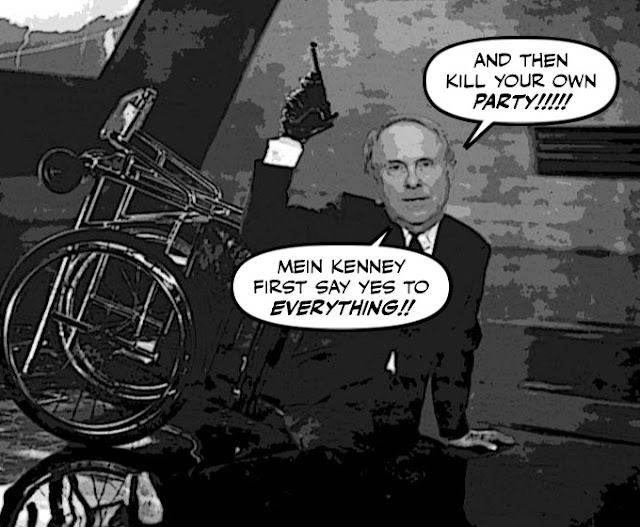 In his book, Harper's Team: Behind the Scenes in the Conservative Rise to Power, he laid out Harper's basic approach to merger negotiations with the PCs: "Harper just kept saying 'yes' until they ran out of reasons to say 'no.'" Put another way, the right-wing Canadian Alliance continued to give in to the demands of the centre-right Progressive Conservatives.

And since it's not hard to imagine Jason Kenney saying yes to every demand from the wild rednecks in the Wildrose party.

His crusade to unite the right will almost certainly end up uniting progressives.

And so much for that walk in the park.

In 1812, Thomas Jefferson declared invading Canada would be "a mere matter of marching." In 2016, Jason Kenney declared a new right wing government would be "a walk in the park." Both willfully ignored the realities in front of them.

And hopefully so much for the ghastly chicken hawk... 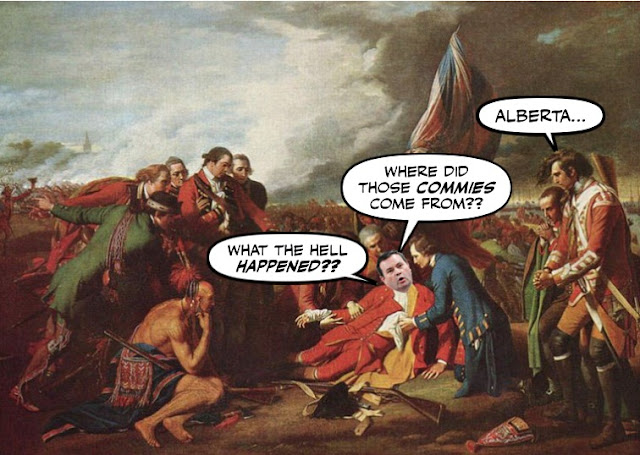 For let's face it, there could be no better political epitaph.

Jason Kenney, a Con who couldn't escape his past.

Was always a right-wing extremist.

And always but always a LOSER...

Harper and Kenney et all have been playing high school president forever. People have finally taken notice that running the gov is an important job.

Great post Simon. On another note are you going to cover any of the happenings down south? I'd love to hear your opinion on it.

The P.C.s may take him in, but it is doubtful the Wild Rose Party is going to go for it. Jean will have to give up his day job and that isn't something he wants to do and what can Kenny offer him instead? Presidency of an oil company, not so much. it all tanked. Can't make him an ambassador. Jean and his Wild Rose party is probably going to stay right where they are. If Kenny and his anti choice attitude gets out and about, those who are Conservative and won't vote Liberal or NDP, will vote Wild Rose. Expect the Wild Rose party not to fall for the Jason jazz junk and become the only right wing party left in Alberta after the next election,. Notley, she'll be in office until she retires.

Setting here in our "La Belle Province" at the Bell Centre watching my Grandson train with the Montreal Canadiens, thinking of what a wonderful diverse country we are so fortunate to be part of. Especially knowing that the bigot CONS in Alberta are taking a walk in the park to the bottom!!!! Way to get rid of that lingering stench my Alberta friends!!!!!! FS