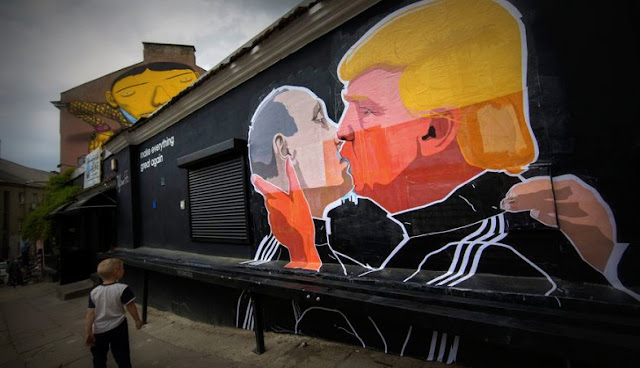 We know that Donald Trump and Vladimir Putin have an unusually warm relationship.

We know that Trump greatly admires the Russian strongman, and that Putin feels the same way about him.

And although they do make an odd couple, I have always assumed it was just one power hungry narcissist, admiring the other.

But what if it was something more sinister? 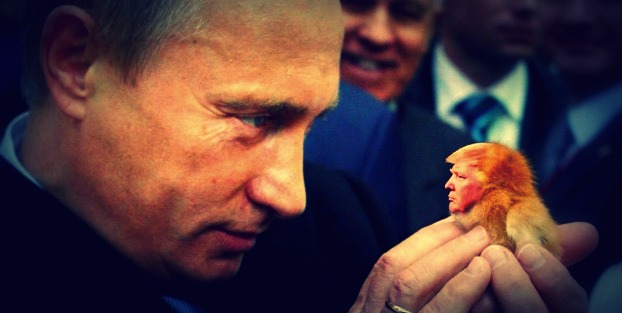 What if Putin had some kind of strange hold on him, and was trying to influence the result of the American election, to help his pet or his puppet win?

Because this e-mail leak, just before the Democratic convention is due to begin, is clearly designed to help Trump.

Top officials at the Democratic National Committee criticized and mocked Sen. Bernie Sanders of Vermont during the primary campaign, even though the organization publicly insisted that it was neutral in the race, according to committee e-mails made public by WikiLeaks Friday.

By angering Bernie Sanders' supporters, and making it harder for Hillary Clinton to unite her party.

And this should set off alarm bells.

While WikiLeaks did not reveal the source of the leak, the committee said last month that Russian hackers had penetrated its computer system.

Because if you add that to Trump's recent statement that he might not defend NATO countries.

Or the fact that his campaign manager Paul Manafort worked for many years for the pro-Russian Ukrainian premier Viktor Yanukovych, whose overthrow triggered the civil war in that country.

One really has to wonder whether that dangerous demagogue is, as Paul Krugman suggests, Putin's Siberian Candidate. 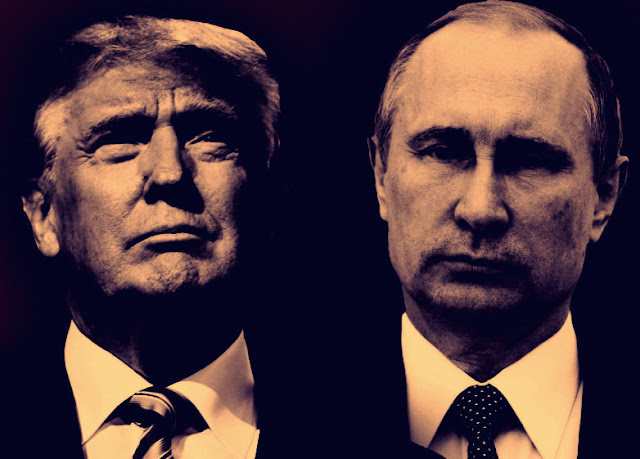 If elected, would Donald Trump be Vladimir Putin’s man in the White House? This should be a ludicrous, outrageous question. After all, he must be a patriot — he even wears hats promising to make America great again.

But we’re talking about a ludicrous, outrageous candidate. And the Trump campaign’s recent behavior has quite a few foreign policy experts wondering just what kind of hold Mr. Putin has over the Republican nominee, and whether that influence will continue if he wins.

Or wonder again why Trump won't release his taxes, and who or what is he trying to hide?

His money or his friends?

Or wonder whether Jeffrey Goldberg is also right, when he suggests that Hillary Clinton is really running against the Russian dictator. 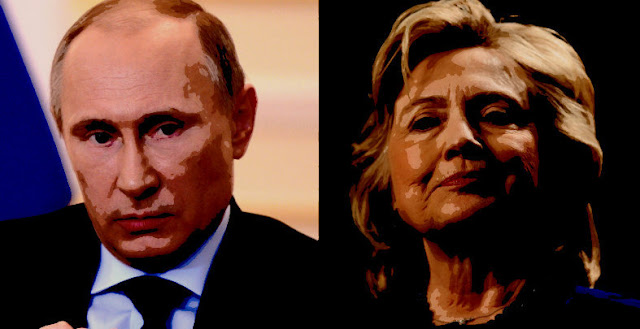 The Republican nominee for president, Donald J. Trump, has chosen this week to unmask himself as a de facto agent of Russian President Vladimir Putin, a KGB-trained dictator who seeks to rebuild the Soviet empire by undermining the free nations of Europe, marginalizing NATO, and ending America’s reign as the world’s sole superpower.

Donald Trump, should he be elected president, would bring an end to the postwar international order, and liberate dictators, first and foremost his ally Vladimir Putin, to advance their own interests. The moral arc of the universe is long, and, if Trump is elected, it will bend in the direction of despotism and darkness.

You know, I'm not a conspiracy theory buff, I have no time for Cold War politics, and I'm not a big fan of NATO. It often strikes me as an organization looking for a war to justify its existence. Which needless to say is dangerous.

But Vladimir Putin is a former KGB agent, and a ruthless political thug, and if he has some kind of hold on a man who could end up in the White House we all need to know. 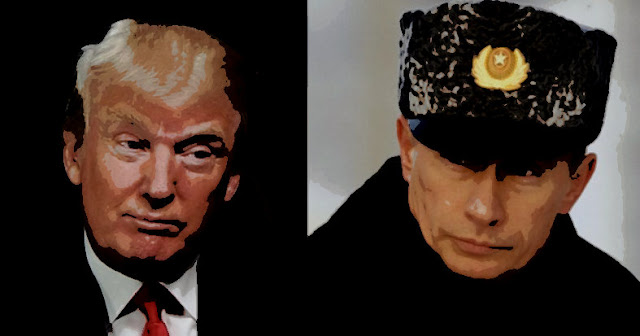 For that would be even more dangerous, it could lead to absolute disaster.

Even the end of the world as we know it.

And Paul Krugman is right.

At some level, Mr. Trump’s motives shouldn’t matter. We should be horrified at the spectacle of a major-party candidate casually suggesting that he might abandon American allies — just as we should be horrified when that same candidate suggests that he might welsh on American financial obligations. But there’s something very strange and disturbing going on here, and it should not be ignored.

Something strange is going on. It is too big to ignore.

The Democrats must use it to smear Donald Trump as a Russian agent.

And use it as one more good reason he should never be President...

So let's vote for Clinton instead so she can start a war with Russia! NATO is provoking Russia with the mass build-up of troops on their border. Russia is one of the few countries not run by Zionist scum, that's why the media is playing up the threat. Don't be fooled, Hillary is the warmonger not Trump. I guarantee if she wins she will also start a war with Iran (for Israel of course).

Not to mention if you read that Globe and Mail article you will see they were trying to undermine Bernie's campaign. Doesn't this piss you off Simon? Doesn't this just go to show once again how corrupt Hillary is? You're blasting the Russians but not a word about how crooked the DNC is.

Krugman and Goldberg seem to be descending into the world of nutbar conspiracies.

I don't imagine Putin is particularly fond of Hilary Clinton but he is emphatically not a fool. Even dealing with a somewhat warmongering person like her has to be better than dealing with a totally unpredictable, wildly narcissistic crazy loon.

On the other hand occasional the Donald makes sense. At least, I certainly agree with this stance:
/Trump argued, in essence, that there is nothing exceptional about the U.S., and that therefore its leaders have no right to criticize the behavior of other countries: “When the wProfessing American excxeptionalism that our country holds a unique place and role in human history…orld looks at how bad the United States is, and then we go and talk about civil liberties, I don’t think we’re a very good messenger.”

Sounds a bit like the nutty preacher standing on the street corner the other day.

Defend NATO countries? My God. On-the-take lawyer-politicians like Obomba and Hillary are putting civilization on the verge of WW3 getting kickbacks from the military industrial complex.

NATO's aggression against Russia is outrageous. If Trump was serious in his opposition to this (and who knows where he really stands) that alone would make him a more qualified president than Hillary. At least the people would get some form of representation in a government completely captured by plutocrats like the Koch Bros (who are backing Hillary.)

After years of having the House of Saud and Benji help dictate US foreign policy its only fair that Putin has a chance.Too bad no one bothers to ask whats best for the American people.

The Democrats had a chance to recognize and address some of the atrocities that whistle blowers like Assange and Snowden revealed but chose instead to try and hang them from the highest tree as an example for others that might be tempted to follow. Assange has now threatened to publish documents that will get Hillary indicted. If true it would be a form of justice but again nothing to do with whats best for the American citizens.
People that support NATO build up on the Russian border should ask themselves how they would feel if Russia signed a mutual defense treaty with Mexico and Cuba followed by deployment of troops and missiles on the US border to deter invasion. Wait! we already know how that played out in the 1960's.
I am in the camp of lets give it another 4 or 8 years until the Bernies come to power but am not far removed from the thought that 'Trump like' destruction is required before rebuilding can begin. The risk is that once destroyed rebuilding will not happen once divisive strongman politics becomes the norm and the West becomes China's middle east.
RT

Simon: No Trump fan here. Never will vote for this vile person. However, I am surprised at your suggesting that Putin has a hold on him, and that, presumably, Hillary would be the better choice.

Debbie Wasserman Schultz has now resigned as Chair of the DNC because of the fallout from the Wikileaks emails. The Clinton campaign suggested that the Russians leaked the emails through Wikileaks to damage her and to help Trump. Think about it this way: if the Clinton campaign thinks that this is true, then it is admitting that the Russians must also have successfully hacked into Hillary's Benghazi and other emails on her unsecured servers. This means that Hillary had not carried out her oath to protect her nation's secrets as SOS, a dereliction of duty which is way more serious than the DNC screwing Bernie out of his nomination.

Hillary was apparently more interested in protecting her own privacy than her nation's security when she used her own private unsecured servers. And then repeatedly lied about various aspects(e.g. never sent or received any classified emails, etc).

Therefore, Hillary, like Trump, is undeserving to be President. Especially when someone in the DNC that was working with Debbie Wasserman Schultz was going to use Bernie's religion against him to suppress his votes.

Surely you do not believe that Hillary did not know anything about the sleazy tricks that were being played against Bernie?

Look at the additional evidence: Hillary has appointed Debbie Wasserman Schultz as Honorary Chair of her campaign now that the latter has resigned from the DNC. Had Hillary not known anything, she would have been horrified to find out through Wikileaks what Debbie had done. She would not have touched Debbie with a ten foot pole, much less bring her into her campaign this way.

No, Hillary had to be part of the gang that had rigged the system against Bernie to help herself. Or at least known that this was being done. Thus, she is no better than Trump. It is an "achievement" to outpoll Trump on who is more dishonest or less trustworthy (67% chose Hillary whereas a smaller percentage, 62%, chose Trump).

You know Simon, 'your blog your rules' and all that jazz, but imho this fuck stick has got to go. He/she started life here as a sort of concern troll, but of late is nothing more than a purveyor of right-shite talking points. He/she make absolutely no effort to back their assertions and/or engage in any sort of debate. Their only aim appears to apply some lame form of Socratic questioning in attempt to get *you* talking. Anyway, my early morning two cents. :-)

I think you should be banned for swearing and insulting me with a personal attack.

The bigger story is that Putin leaked the e-mail messages, and US and Canadian banks apparently consider Trump a default risk. So where is Mr. Leverage getting his funds. The leak alone deserves the attention of our Intelligence community. Whether some in the DNC question whether Bernie Sander's is Jewish enough, etc. is politics and completely legal.