The Harperland Spring and the Big Con Makeover 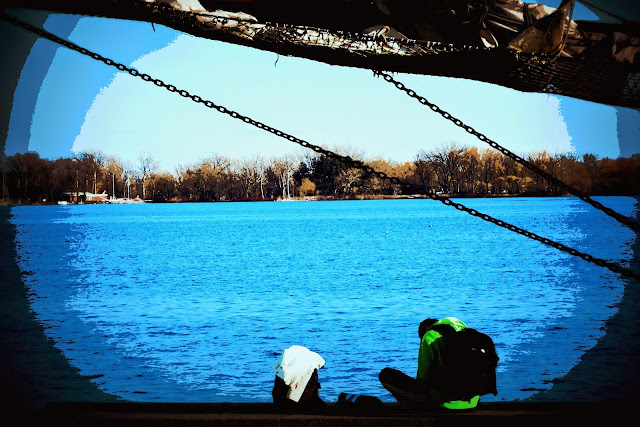 If it wasn't for the fact that it's almost May, and Spring still feels like Autumn, I might have trouble believing I'm still living in Canada, or Harperland.

For when I check out the news these days I can't believe what I'm reading.

First there was Pierre Poilievre watering down his toxic Unfair Elections Act after vowing not to change a word.

And today there was Jason Kenney posing as a champion of Canadian workers.

Which had me wondering whether he's losing his mind. 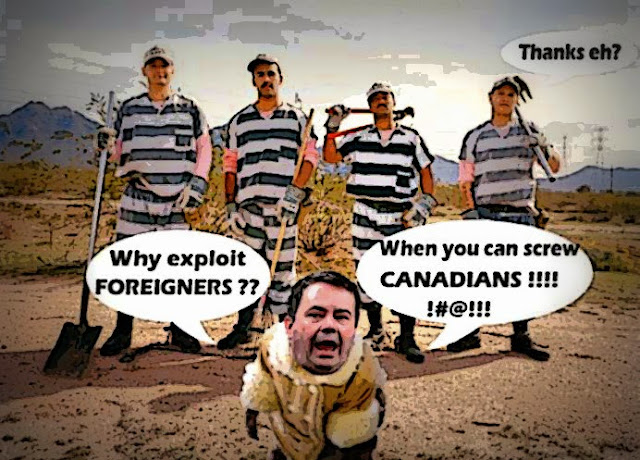 A suspension of the federal government's temporary foreign workers program for the restaurant industry sends a clear message to employers that they must "redouble" their efforts to hire Canadians first, according to Employment Minister Jason Kenney.

Kenney said that unemployment rates for youth, aboriginal Canadians and new immigrants are "too high," and suggested that this might be addressed if employers raised their wage rates.

For wasn't he the one who created the massive problem, so the Harper gang could drive down wages, bust unions, and turn us all into slaves?

And since when did the Cons care about young and aboriginal Canadians? Help me Jesus Jason, I must be going CRAZY !!!!!

But luckily there is a rational explanation. The Cons it seems are clearing the decks, or taking out the trash.

It has the hallmarks of a massive write-down; as when a public company facing headwinds “takes its medicine” by writing off the value of wasting or non-performing assets – sometimes causing the stock in question, paradoxically, to rise, due to the sudden removal of the overhang.

Could this be what the federal Conservatives had in mind last week, as they sustained one crushing blow after another on key policy files, tossing losers overboard like so much ballast?

Thanks to the RCMP, Elections Canada, and the Supreme Court, the Harperites have been handed a chance to put lipstick on their pig of a government.

All of which leaves us with this; a Conservative government miraculously, albeit painfully, shorn of its most troublesome files, and free to talk about the economy, which is all it really wants to talk about anyway, and how it intends to “give back” the growing budgetary surplus, which amounted to $5.1 billion in February.

And Stephen Harper is seizing the opportunity to give his government a makeover.

And try to make himself look pretty prettier... 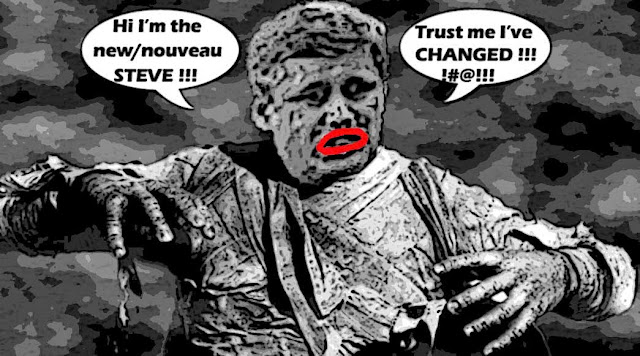 And not just by smearing more lipstick and mascara over his cold, dead, features.

Which have been running for months, and are clearly designed to attack the courts, and appeal to the beast within us.

But then of course he really had no choice, since if you remember, that was also a SCAM.

Indeed, the clip, as it turns out, is stock video, purchased from Uberstock, a video company in Oregon City, Oregon, and appears to be 100-per-cent free of Canadian content.

Apparently, the folks at Uberstock didn’t intend to suggest Sad Video Mom had been victimized criminally. The clip is titled, “Mom worries about money problems” and usage rights start at an amazingly frugal $42.

As Canadian as a three dollar bill, or as fraudulent as the sight of Jason Kenney pretending to clean-up the problem he created.

Or Stephen Harper pretending to be a REAL economist... 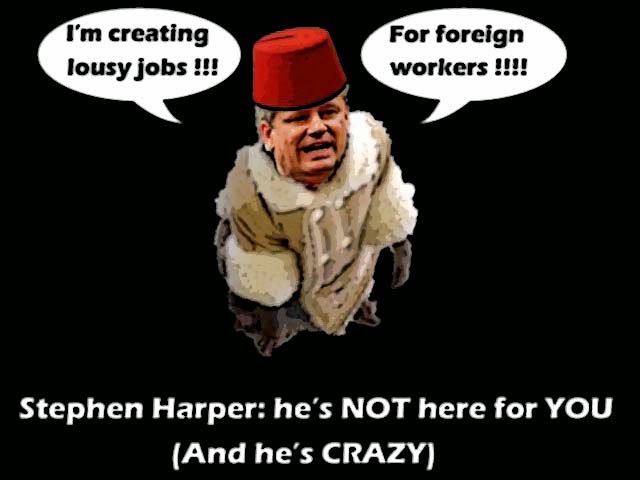 Or a nice guy.

And this latest scam to put lipstick on the Con regime almost certainly won't work either:

it would all be tenable, quite plausible indeed, were it not for this; how many times can a government lose face, and faith, before it has exhausted its store of second chances?

Given the track record – the in-and-out affair, the self-serving prorogations, the omnibus bills, the F-35 affair, the serial attacks on officers of parliament, the Nadon dodge, C-23, and now the utter ruin of a decade’s worth of promises of Senate reform – few fair-minded observers will believe that what comes next is anything but a way station, before the next self-inflicted crisis.

It is is a problem, in other words, not of strategy, but of fundamental trust in the character and integrity of leadership; an asset that cannot be written off and that, once wasted, tends to remain that way.

It's too late for that, the damage has been done. The Con regime is too tired and too corrupted for a makeover. Its Great Leader too depraved and too detested to survive.

If the scandals still to come don't finish them off, we will.

And when the next election arrives, we'll be the ones taking out the TRASH... 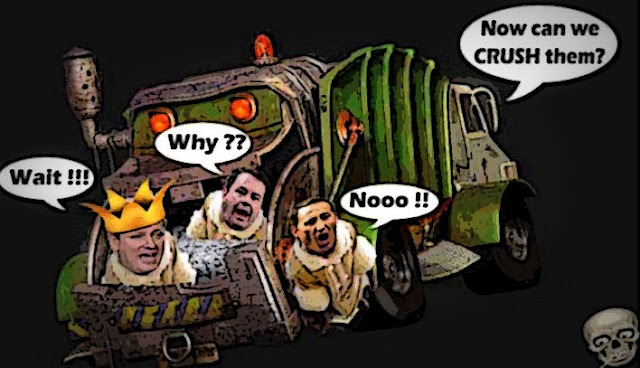 Harper has outdone Harper, he has taken Canada into new levels of idiocy. He has sanctioned ourselves. I am sure he will call it a great victory.
http://www.zerohedge.com/news/2014-04-27/canadian-sanctions-boomerang-cancels-russia-based-spy-satellite-launch

And also too, that same "downsizing maneuver" is also read, more often than not, as the beginnings of a downward death spiral by a company from which few regain a healthy status. Nice parallel, huh?
Happy Monday and let's hope nobody drops a house on lurid-ene like they did her sister in Oz. ;-)
Up with cats and down with the dirty, worthless Injun wimmens! Let 'em eat Cat Chow, right?

I also noticed how Harper's twitter feed has been cleaned up. All the partisan shit has been wiped away. Like you I think it's too late.

I disagree. Harper is not finished with this country yet. Not by a long shot. Harper is rabid to have his power and glory. He wants to be the big shot, on the International scene. Harper thinks his braying threats to Putin, makes him a very important big shot. All Harper and Baird do is, embarrass this country, with their asinine childish threats.

When NATO expressed the concern, NATO should be defending our High Arctic from Russia? Harper point blank refused.

The quiet parade of Chinese Military Brass have been visiting Canada
03/26/2014
www.embassynews.ca

Canada knew the Uranium and nuclear deal with China, would be seen as *weak* documents.
04/16/2014
www.embassynews.ca

Consider? Harper took BC's Humpback Whales off the endangered list. That means Petro-China is going to force their Enbridge pipeline, with their own cheap labor of course. The Humpback and Orca's feed in that channel. The Humpback Whales suffer the worst and the most ship strikes. So likely Harper will have to call in his Red China Communist Army in. That is the only way, Harper and China can force the dirty Bitumen pipeline through.

Harper wouldn't need a military in the high North, he would have China's military. Harper knows the BC cititizens and the FN people despise him and Communist China. Christy Clark lied about her stance of the Enbridge. That was just another of Premier Clarks lie's

As we see. Harper has spread his evil poison, all across Canada.

hi Steve...I'm afraid I'm trying ignore the Ukraine crisis as much as I can, Harperland is bad enough and I don't want to overload my system, or my sanity. But yes, Lord Harper abroad is a frightening sight, he doesn't know what he's doing, and all we can hope for is that he doesn't start the Third World War. Please advise me if it's imminent so I can start drinking heavily... ;)

hi anon...yes, we must make sure that the Cons are downsized beyond recognition. Shrunken to the size of mice so Harper's vicious kittens can feast on them. But as for Laureen I think she's in the dog house, I mean the cat house. The PMO has ordered her to stick to her scripts in future and to not even THINK of wearing a fur coat...

hi anon...oh goody, I thought I was the only one who had noticed that his profile page had been cleaned up. I've since heard that some opposition MPs had questioned the way he mixed government business with plugs for the Con party, so maybe he listened to them and has now turned it into the "Good News Hour."
And needless to say when I saw how he's now pretending to be a Habs fan I practically fainted. If that doesn't jinx them, nothing will...

hi anon...I am certyainly not suggesting that Harper is finished with Canada. What I am saying is that if we play our cards right we can finish off the Cons...

if Canada actually needs more workers, than they ought to come as landed immigrants. the temporary worker's program simply permits employers to abuse workers without any fear. Not a good think. If employers say they can't afford to pay the wages at a "living wage" then they ought not to be in business.