Are We Losing the Battle to Kill the Unfair Elections Act? 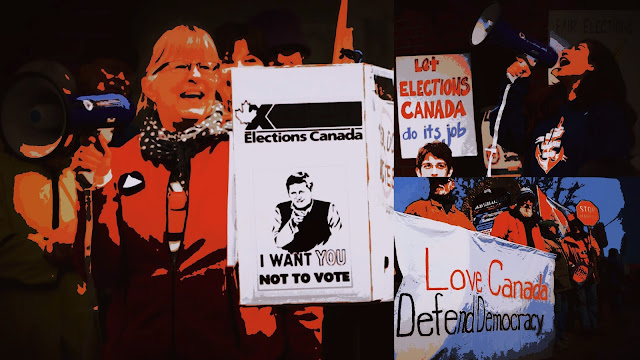 I thought we were making good progress in our struggle to try to force the Cons to change or kill their foul so-called Fair Elections Act.

But it turns out I may have been a bit too optimistic.

For while we have made progress, it seems far too many Canadians are still too ignorant or too complacent.

Over the past couple weeks, the federal Opposition has been ramping up its criticism of the Federal Elections Act, pounding the Conservative government during question period over the proposed bill that many critics have claimed is a threat to democracy.

And while this has all generated lots of headlines and the issue is certainly big news on Parliament Hill, it doesn’t seem to be causing much of a stir with the rest of Canada.

And as Frank Graves points out, motivating them won't be easy.

When 40 per cent of the public don’t even bother voting, then how whipped up are they going to be over, what is seen as arcane changes to regulations governing something that, if you’re under 40, most people don’t do. Which is vote,” Graves said.

Which makes it even more urgent that we step up our campaign to educate Canadians about the dangers of the bill. 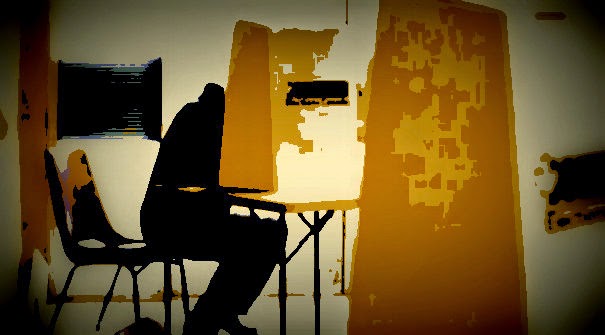 “Telling them a little bit about it raised people’s concerns dramatically. Once people heard about it, they said that doesn’t sound like a good idea," Graves said.

“But the challenge is, and I’m sure the government is pleased about this, is that in a world where democratic engagement is so low…it’s an area where people aren’t paying much attention.”

But the problem remains how to get their attention, and explain why it's important, or why they should care.

Because as the pollster Jaime Watt says, right now it's just not registering. 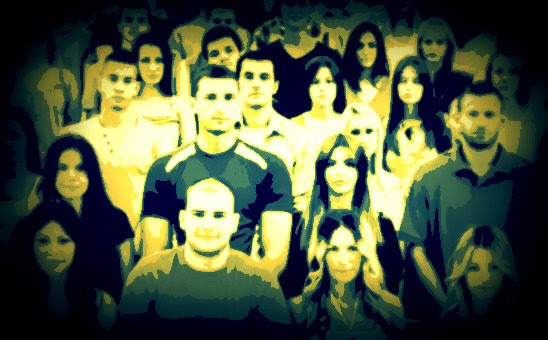 "Right now, when Canadians look at this, they look at the issue, for example of vouching and some of these other issues, and they don’t see that applying to them. They see it applying to very few people.

“And people who really want to stop this bill or get it changed, need to think hard about how they can adjust their messaging so that it affects more Canadians.”

So we do need to adjust the message, or the same voter apathy will come back to bite us in the next election.

And we do have to do it ourselves because the Cons are trying to stop Elections Canada from putting out ads to encourage people to vote.

For the most sinister of motives, and the craziest of  reasons. 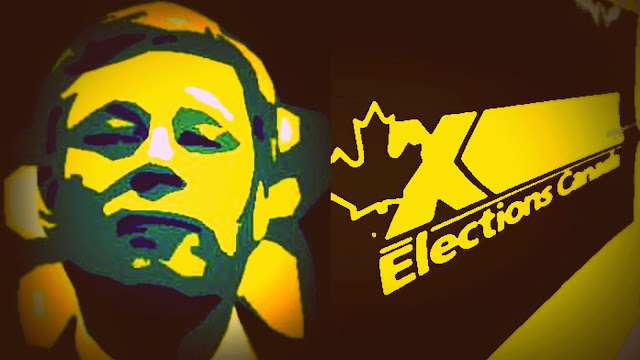 But the good news is the more we educate Canadians about that foul bill, the more people will oppose it, and the more they will be motivated to vote to defeat the Cons in the next election.

And if this issue does catch fire, as I still think it will, the flames could help burn down the House of Harper.

"The ultimate goal is just to make the protest and be as loud and as obnoxious as I can going across the country,” Musson told the Lethbridge Herald last week.

“It occurred to me in about March of 2012, that the 2011 (election) was a fraud. The robocalls; the financial fraud. Harper will say anything knowing that he’s not going to do what he says. It’s an illegal government and there’s just no rational sense, in my mind, to believe that they’re anything other than an illegal government.”

Keep spreading their message. Or make your own.

Keep encouraging young Canadians to vote by showing them why it's important, and why only they can shape their future.

Or as I do by showing them this video...

Then asking them if they can guess why the Cons don't want them to watch videos like that one? 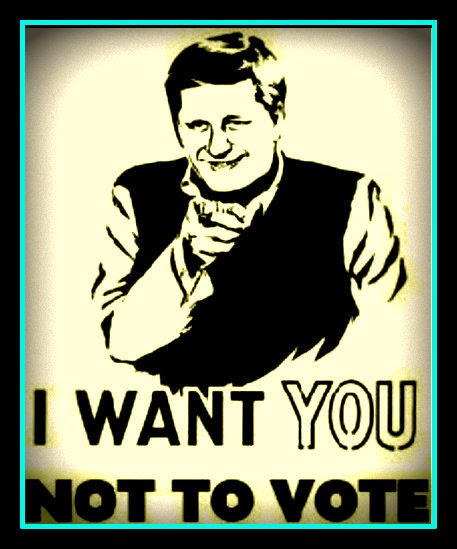 Before telling them bluntly what I tell everyone.

Or they will join The Great Canadian Resistance, and help save our democracy, by defeating the Harper regime.

Or we will all end up in a really bad place. 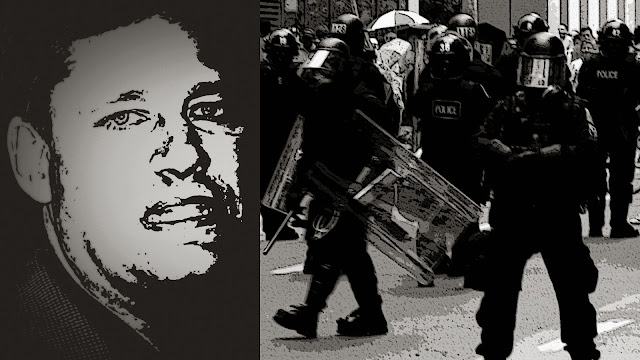 There's still some good news in this article. First, the survey discussed was taken in February, and since then this issue has been in the news quite a bit, especially over the past week. The more Skippy Poilievre picks fights with respected Canadians such as Sheila Fraser and Marc Maynard, the more this bill and all its problems makes headlines. Second, when people become informed about what's in the bill, they look at it with horror.

While I'm never confident anymore in the political alertness or awareness of our fellow citizens, I do think if we keep up and amplify the drumbeat of opposition to this, it's quite possible it could blow up in Harper's face. Just like the prorogue mess did, which also started out as an "arcane" or procedural issue and became a big headache for "I make the rules" Harper.

I'm afraid that actually confronting harper is more than the Canadian left is capable of. Even leftists and everyone vaguely "progressive" together, ... all we're able to think up is a one-off demonstration or some useless goddamned petitions.

Most Canadians are blissfully unaware and unappreciative of the potential of their democracy. They're not even paying attention to things like this. Torture is a crime against humanity but harper waltzed through that one. Elections Canada conspired with the harpercons to bury their investigation under a mountain of excuses and bullshit. We let them get away with that too.

Thanks for this, Simon. I have to admit I was somewhat discouraged when I read the report the other day, but your post has helped buoy up my spirits. And that short video is excellent. I think I will cross link this on my own blog.

If only the asshole, instead of following in his fathers footsteps, had followed his grandfathers.

Harper doesn't have a decent bone in his body, he is a vile fascist dictator. Harper has no conscious, as all sociopaths don't. Think back to Stalin, Hitler and Mussolini, their characteristics were all very similar. They were dictators and control freaks too.

What amazes me is, Harper's team still support that evil monster. I have nothing other than contempt for them, for being so gutless. Harper and his team must be from, the Ninth Ring of Dante's Inferno. I have never known anyone as evil as Harper, on our Canadian soil ever.

Sociopath eh? Well there has been a lot of media around this kind of thing lately:

So apparently its always just been a matter of time. Perfect storm of nature and nurture. Maybe we should require any politicians to undergo a brain MRI before taking office eh?

hi anon...yes there is good news. As you point out the poll was taken in February and since then many more things have happened. I hope more people are aware of the bill, and that the levels of disgust are much higher now than they were before. And I agree that this issue has a real chance of blowing up in their faces. As I've pointed out before, it did blow up in the faces of the Republicans in the last presidential election, by actually encouraging people to vote to spite the voter suppression schemes. And the same thing could happen here...

hi thwap....I can understand how you feel. We haven't been able to confront the Cons as they deserve. But I am encouraged to see more Canadians speaking out. Or in the case of that 72-year-old guy marching for our democracy. It is however not enough, and we need to do more to create a movement and frame the debate better. I erupt like a volcano every now and then at what I perceive to be the unforgivable complacency of our people. But if we aren't able to reach them, whose fault is that? The parties need to be more modern in their approach, rely on more than Parliament to get their message out, and be far more aggressive. It's striking that we have never been able to frame the Cons like they have framed us, and we must do better...

hi Lorne...you're welcome. I don't blame you for being discouraged, but in this case we are in a really good position. All we need to do is make more people aware of the bill, and why it's so dangerous, and we can reap quite a reaction. Reaching the complacent is still a challenge, but it's one I feel we can handle. When you have someone like Pierre Poilievre to showcase, how can we fail? ;)

hi Ron...I'm not aware of what his grandfather did, but I've always been fond of the people from Montreal's old Irish Town. They lived in the poor neighbourhoods of Lachine and Point St Charles, they had many children, and they got on with their French-speaking neighbours better than any other Anglos did. But then they don't usually become Conservatives, so I can't forgive Jimbo for that one... ;)

hi anon 12:44...yes Harper is clearly a clinical psychopath, he truly cannot feel the pain of others. But the good news is because they can't get normal feedback, they often delude themselves, end up making ghastly mistakes, and screwing themselves...

hi anon 7:56...I have written several posts about Harper's sociopathic tendencies, and how they explain some of his behaviour. Unfortunately our predatory world is full of them, and many are highly successful. So it will take more than an MRI to drive them from office. We just have to build a better society, where the callous and the cruel are not allowed anywhere near power...

There was never going to be a contest even if a couple of million people marched in the street. Harper has a majority government and that is all that counts. He has the seats, he wins anything which is brought before parliament. Does he care if we don't like it, No he does not. He wants this act pushed through parliament because he wants to stay in office. This is the Canadian version of a voter suppression act. It will pass. The Conservatives want to be re-elected to finish their "agenda" and this country off.

Canadians gave him a majority government and now they can live or die with it. Harper doesn't care, as long as he has what he wants.

I think I entirely agree with that one, e.a.f.