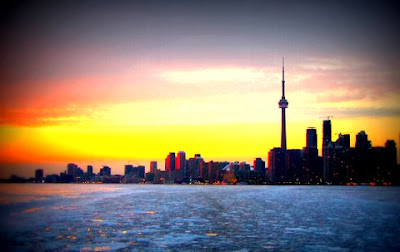 This is what Toronto looked like this evening from the Island ferry. The sky clearing, the ice breaking up in the bay. Glowing in the setting sun like a city whose nightmare is over.

Except for the huge chunks of ice threatening to slide off buildings and smash into the streets below, and for all the people still without power from Ontario to New Brunswick.

But even though it's been EIGHT days since the massive ice storm hit, and about a MILLION people in THREE provinces were left in the cold and the darkness, at the height of the holiday period.

All Stephen Harper has had to say about this disaster is still these TWO miserable tweets...

Framed for your consideration in all their callous INDIFFERENCE.

Which is so frankly bizarre, it can only mean that either he didn't think that a million Canadians freezing in the dark was a REAL emergency.

And has lost his judgement. 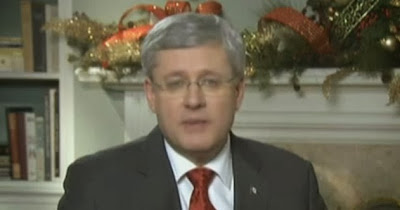 As his deeply disturbing Christmas message seems to suggest.

And is now in such a state of total psychological collapse, due to the accumulated stress of the Senate scandal, he cannot be exposed to the public lest he be deemed unfit to remain in office.

Or that he simply doesn't give a damn, because he's planning to resign soon anyway. Or because it didn't happen in Calgary, and he can't feel the pain of the Eastern Bastards. 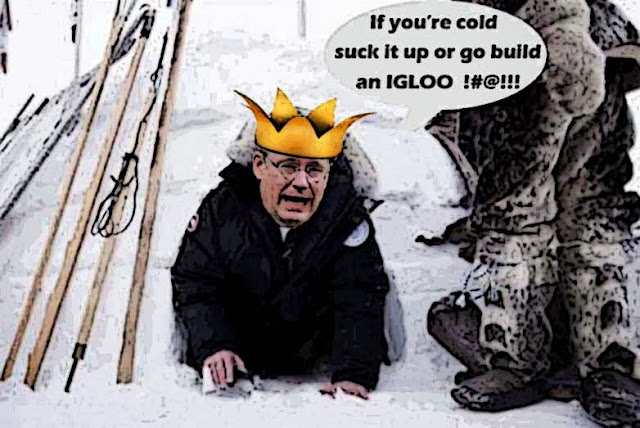 But whatever the reason, Great Icy Leader has made a BIG mistake. Like his Con buddy Rob Ford who refused to declare a state of emergency so he personally wouldn't lose any more power.

"Everybody's agreed this is not a state of emergency," Ford said, adding that the entire city needed to be paralyzed for that to happen.

But on Sunday, Deputy Mayor Norm Kelly told CBC News Network on Sunday that his advice to the mayor was to declare a state of emergency. Kelly said he felt it was important psychologically to let citizens know the city was taking it seriously.

But who also forgot that in a time of disaster, even a symbolic declaration can have a big psychological impact. Give those suffering from the unique horror of an ice storm hope that all is being done to help them.

For while it cannot be compared to the Great Ice Storm of 1998, which I lived through in Montreal, there was a lot of suffering.

An if it felt like an emergency for so many, and the hundreds of thousands of police and rescue personnel and Hydro workers and volunteers who struggled to cope with the situation, governments should have considered it an emergency as well.

So needless to say a LOT of people are not happy. You hear that anger everywhere. You read it in the newspapers.

Your ice storm headline asks the $64,000 question: How is this not an emergency? When 800 traffic lights are out and 300,000 households (not 300,000 people) have no power or heat during a deep freeze, most reasonable people would say we had an emergency that needed resolution ASAP.

Mayor Rob Ford says a declaration of emergency would cause panic. Torontonians don’t panic easily, but they despair of a refusal to take an emergency seriously. 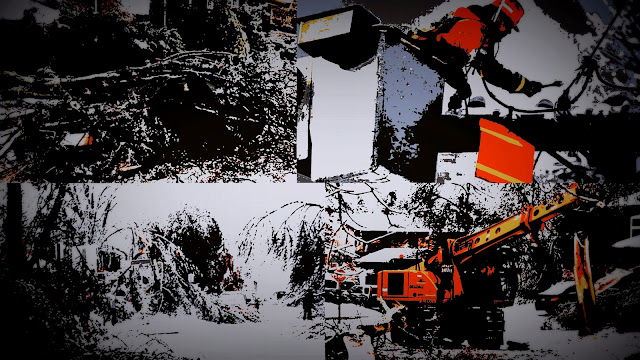 This is madness! People freezing in the dark, Toronto Hydro cutting branches off trees, the army sitting around complaining about their new uniforms, Mayor Ford not declaring a state of emergency because he has no authority to and would look weak if he had to ask the deputy mayor to do it, the real mayor too busy holidaying to pick up the phone to declare a state of emergency and call in the army, who are good at cutting branches off trees. What kind of dump is this?

And all of this will come back to haunt both Ford AND Stephen Harper...

Golly. Isn't that great? As if those two Cons hadn't been hammered enough in 2013.

Now along comes Mother Nature, and makes Ford look like a bumbling opportunist, handing out fridge magnets in the middle of a disaster.

And makes Harper look like a callous monster, too damaged and dangerous to remain in office. 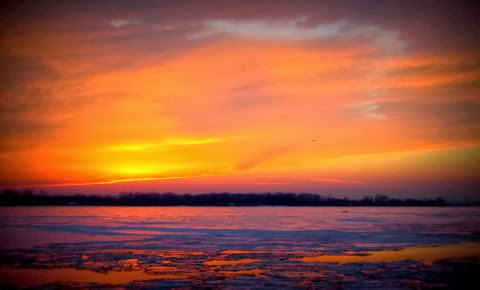 The sun is setting on the Con regime.

And after the long darkness of that filthy Harperland.

Our future has never looked brighter...

Hi, Simon. What else did you really expect from a couple of bozos like frod (pronounced fraud) and harpie?
Isn't the seal analogy a little harsh? People are much more fond of seals than the aforementioned idiot bastards' sons and even the club-wielders feel more remorse when hitting the seals than they would beating the these two witless assholes until they stopped screaming. Just a thought . . .

As I read about this, safe in the West, I can't help but compare it to the outcry against Bush during Hurricane Katrina..yes, I know they aren't comparable natural disasters, but the response to this should have been immediate...it seems obvious to everyone else in the country..but apparently Ford and Harper both remember only one critical thing...that the voters have extremely short memories, stay home in droves on election day, and only their rabid supporters seem to get out and vote..
I hope, sincerely, that Ontarians and Manitobans remember this response (I believe, sadly, that the Maritimes are beyond hope when it comes to voting for anyone but Cons or Libs, no matter what...) but I despair of this country ever ridding itself of the rightwing whackjob machine (the evidence is here in BC..*sob*)

I guess everyone lies to themselves every so often, but with you Simon it seems to be a pathology, you might want to see some one about that.

hi anon....well of course when I meant club them metaphorically, since I don't believe in violence, and I'm a huge animal lover who couldn't club anything. What I meant was that now that they have been rendered vulnerable by the Senate scandal, we should take advantage of the situation to attack them for all the other bad things they have done. And of course show them no mercy...

hi lefty...yes it was no Hurricane Katrina, but thanks for the analogy that had somehow slipped my mind. Because we can work with. Where was Stephen Harper when you were suffering? In his warm house in Calgary, missing in action. It's only one episode in this long running horror story, but every little bit helps...

P.S. don't lose hope, the wheels of the rightwing whack job machine are coming off, and I'm counting on you to take the wheels off in BC... ;)

hi Steve...What does Peter MacKay's pecker have to do with this. Wait, please don't tell me, I don't want to know. One more Con wood pecker in this story and I think I'll scream... ;)

hi anonycon...If I ever need a shrink believe me it won't be you. I mean as we know crazy is Harper's middle name, and there are no bigger liars than the Cons. However now that you've finished trying to insult me, would you care to disagree with anything I said in the post itself? No I didn't think so. For what could you say? Except I'm as crazy as Stephen Harper, and just as DESPERATE as he is. Happy New Year....

hi anon...No you may NOT. At this blog we believe in positive reinforcement, at least ... um...some of the time. And we need to remember that like most Cons he is just scared and DESPERATE. So just make soothing or clucking sounds, throw him a tiny Chihuahaha bone, and he'll behave himself.... ;)

It is interesting that some one who appears rather right wing comes to this blog. perhaps they have the hots for Simon. They can't be coming to read what he has to say. annoy. doesn't agree with Simon nor the rest of the readers. Let us all think of him as someone who is hurt and can't help themselves, then ignore him and send him to his room.

Harper did miss a great opportunity during the snow/ill storms. You didn't see or hear from him. By not offering federal assistance to those areas which need it, the federal government saves money. Oh, well perhaps stevie has done us all a favour, in a round about way. he didn't take an opportunity to take a leadership position, offer the armed forces assistance, or act like a prime minister. Next snow storm, whomever is the P.M. try to remember that.

I was horrified by the story about Kathleen and her faithful dog. Terrible how isolated she is, and can't afford a phone (obviously, food and care for Penny comes first). During the ice storm that affected Montréal, Ottawa and surrounding areas, it seems we did more to support vulnerable people. I was volunteering in a shelter nearby. Toronto needed more than "warming centres"; it needed safe, warm temporary places where people could sleep and eat properly. And understanding that many of us would NEVER abandon our animal companions.

I'm glad people are raising money for Kathleen and Penny, but they also need human contact.