Stephen Harper and the E-Mails That Could Destroy Him 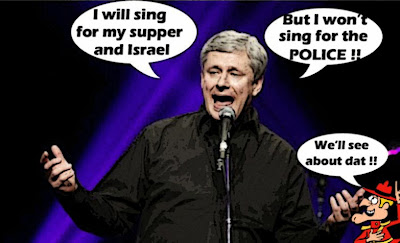 Well he wasn't in the House of Commons today to answer questions about the latest twist in his sordid Senate scandal.

No doubt recovering from his long musical set at a Jewish community fundraiser the night before. Or too busy promoting his boring hockey book in downtown Toronto this morning.

So he didn't have to try to explain why his PMO lawyer's e-mails mysteriously disappeared.

NDP Leader Tom Mulcair asked Monday how former PMO legal adviser Benjamin Perrin’s emails could have been found months after the RCMP first asked for them in relation to the Mike Duffy-Nigel Wright affair.

Only to mysteriously reappear after the RCMP showed an unusual interest in them.

According to the PCO, the email account came to light in recent days, after the RCMP sought further confirmation from the PMO’s counsel that Perrin’s emails were not available from any other source.

To which questions the Prime Minister du jour, the dickhead Pierre Poilievre, replacing the benched buffoon Paul Calandra, had no reasonable answers. 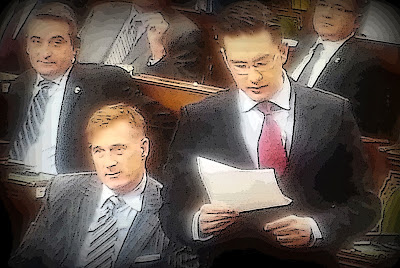 Liberal House Leader Dominic Leblanc asked if any PMO staffers had access to Perrin’s emails between the time of the original RCMP request and when they were discovered. Poilievre did not directly reply, pointing only to the PCO’s apology in the letter.

Except to try to make it sound as if the PCO was a separate department. When in fact it is the bureaucratic arm of the PMO, and under its TOTAL political control.

But unfortunately for Poilievre, and the political thugs in the PMO, the Cons will not escape their responsibility so easily.

Not when the RCMP are investigating them. The information commissioner wants to know if the public has been lied to. And there are so many burning hanging questions.

Will Canadians ever know what’s in the Perrin emails? The RCMP does not comment on ongoing investigations, and won’t release them unless they file charges or file them in court as part of a request for a search warrant or production order. In Question Period on Monday, NDP Leader Tom Mulcair asked the government to table the emails in the House. The government did not do so. 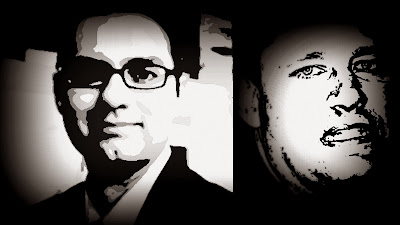 Because they could determine whether Stephen Harper survives the scandal or leaves office in disgrace or in handcuffs. For giving a massive cover-up the good to GO.

And since the PMO appears so determined to conceal them, one can only imagine how damaging they could be. For why would the innocent act like CRIMINALS?

And of course after this arrested "disappearance" NOBODY will believe what Great Scandalous Leader and his Con gang have to say about ANYTHING.

Not when words like "good to go" or "we are good to go from the PM" or "this is epic" can be so devastating.

Tens of thousands of words are churned out about politics every day in this country, but few have any staying power in the public arena. When they do, the power of these words cannot be underestimated.

Those eight words sum up three threads in this ongoing scandal: Harper’s possible involvement in the use of Conservative funds to pay back Duffy, potential outside influence brought to bear on an independent audit of the senator’s spending, and the direct involvement of the PMO in the whitewashing of a report as part of a secret deal it sought to cover up.

And more and more Canadians will inevitably ask themselves this fatal question... 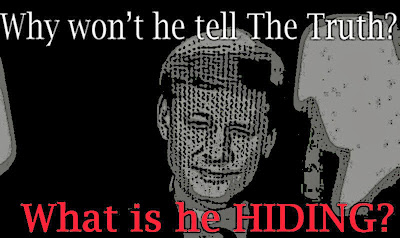 Yup. They're digging themselves ever deeper. They're desperate, they're making it up as they go along.

But the truth will not be buried.

And sooner or later it will destroy them... 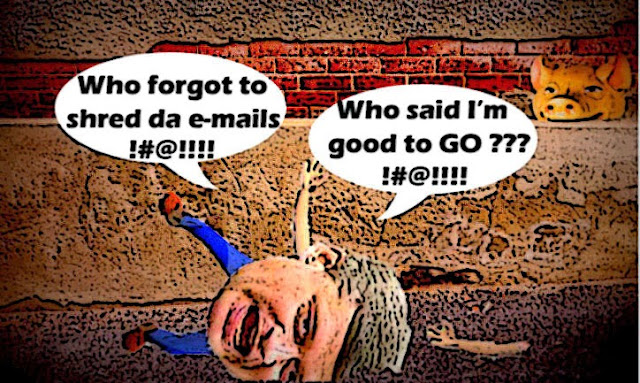 ... loved the 'PMO scream' tweet .. and this mornings razor sharp perspective is exceptional as well..
We're in this for the long haul Simon .. The wheels of justice grind slowly when they're obstructed
and especially when those that justice needs to grind on, control the wheels

The Aiders & Abettors .. AKA the Harper Government, the unelected PMO stooges & the Conservative Party
perhaps need a truly unforgettable descriptive or bumper sticker or name, as they 'circle the wagons' (N Wright)
Conservative values are my values (S Harper) the Baseless Smears (D Del Mastro) Let them eat Duffy (Simon)

And .. since when does a Canadian PM put his personal ideology before the Law of the Land?
Harper is in violation of the Geneva Convention re Israeli apartheid.. In Canada we will not deny ownership or leasing of land based on racial discrimination.. Oh .. did Stephen Harper 'not know that' ?? And where are MP's or Ministers or Senators to challenge him on this? Spying on Canadians is OK now, as well? Lying to Canadians is the new normal?

This narcissistic asshat needs to be straightened out..
on the fact that he is only our public servant..
and he's the Chief Aider & Abettor of his own political calamity ..

We'll be so much better for having survived the toxic Harper era
but if we're smart, we will remember Harper like bad whisky & smallpox blankets

One can only hope that the RCMP will lay charges in this scandal. That would certainly renew my faith in the RCMP, an organization that has appeared, on several occasions, to be in the 'pocket' of Harper. Laying charges against all who should be charged, right up to the top, would show that the RCMP are indeed capable of upholding the law, in a non-partisan/owned by the PM way.

Harper (in particular) and his cronies should not be above the law, period!

For the first time in a very long time, I am thoroughly enjoying Canadian politics......the scandal that simply will not/should not go away!

Simon, your enjoyment of this entire situation is also evident in your excellent blogs. For the last year or so, you have indicated that you were totally fed up with the situation and considered leaving the blogosphere. That was not good news to those of us who treasure your blog. It would appear that your spark has been reignited and that you will continue to blog. Good news, because we need you!

It seems that Wayne woke up one morning, smelled the coffee, and decided it was time to do his job. I doubt that he would want the RCMP microscope examining his office for possible obstruction activity.

hi salamander....I'm glad you enjoyed that tweet. I did too. ;) I can only imagine the frenzy in the PMO when the RCMP didn't accept their facile statement that the e-mails had been deleted. And yes the wheels of justice grind on, still too slowly for me. But when I compare the situation to what it was just a year ago, I am enormously encouraged. I'm starting to believe that we might actually survive the toxic Harper era, and the more horrible its end, the more I shall celebrate. As for Stephen Harper's position at that that Jewish community dinner all I can say is that a Canadian Prime Minister. And I hope they have a cage at that bird sanctuary reserved for him. A cold miserable overcrowded jail cell would be good.
But being able to visit him, and throw bird seed in his general direction would be even better... ;)

hi Weruke...like you I hope that the RCMP will finally lay charges. I can't see how they can be avoided. But the political pressure on the force must be incredible, so who kows what the hierarchy might decide.
It seems to me an excellent chance to clean up our politics, and restore the reputation of the force almost overnight. So I'm keeping my fingers crossed. As for my enjoying the situation, is it that obvious?
I must try to conceal my glee a little better. ;) Although that might be difficult. I do wear my heart on my sleeve, which explains why at least once a year I talk about giving up blogging. I may cut back a bit, because I really want to work on some videos, and with the time the time I have available I really can't do both. But I did swear a scared oath to blog at least until the Con regime is history so you won't get rid of me that easily. And thank you for your sweet words. When I'm down readers like you give me a huge boost and encourage me to continue...

Many Canadians have no faith in the RCMP. In a part of Canada? Citizens did not want their contract renewed. Nor, do they want the RCMP as an, icon for Canada anymore. Harper dictated to the RCMP? They were not to speak to his team, without his approval.

Harper has stonewalled and blocked most investigations. He is quite willing to cut the throats of his team, to save his own miserable hide.

We don't even know? How much of Canada, Harper has signed over to Communist China? At one time, there was a lot of chatter that? Canada, Mexico and the U.S. would form the NAU. We have American Police operating in Canada, exempt from our Canadian laws,

Your blog is a ray of sanity in this darkness that has been enveloping us since 2006. Thank you for your courage and doing what you do, only wish more would see it and wake up to whats been happening.
Listening to the senate debate whether to call in Runia today was inspirational, as i heard the speech by senators Furey, Cowan and Fraser they instilled a hope that Canada was still a democratic country, this was quickly shattered by the drivel coming from Harper's hand puppets, and the fact that they completely disregarded decency and morality in voting against the motion brought me back to the cold reality of what Canada has become. There is a book out there, think its called The armageddon factor (http://www.amazon.ca/The-Armageddon-Factor-Christian-Nationalism/dp/0307356477) i sincerely suggest you have a read Simon, as well as see the two documentaries Waiting for Armageddon and Jesus Camp, if you haven't already as it will truly help you understand the true dark times ahead of us. Also good to keep in mind that this whole religio-political movement was started, is funded and fed by the Zionist extremists from Israel which would explain Harper's close ties with those factions.

hi anon...well better late than never. Nothing like somebody volunteering to search your hard disks to make you see the light...or hear the sirens...

hi anon...I realize that a lot of people don't trust the RCMP, but right now they're our only hope for justice, and they seem to be doing their job quite well. So I'm keeping my fingers crossed...

hi anon...thank you for your generous comment. As I've mentioned before, I was lucky to be able to recognize Harper's nature right from the start because of having done a class project on him once. And I have read the Armageddon Factor, and although the MSM shrugged it off I found it quite chilling. And I've also run stuff from the Jesus Camp, and written about the so-called Christian Dominionists who are best represented by Charles McVety, the grotesque bigot and the man who once claimed he could get Harper on the phone any time he wanted. The whole Harper regime is a strange mixture of religious fundamentalism, extreme right-wing ideology, and of course the madness provided by Great Leader himself. It's an absolute abomination and totally un-Canadian. But unfortunately since so many people had never seen anything like it this alien form was allowed to flourish and take over our government. But don't worry, we have the vaccines or the votes, and we will get rid of them...

hi anon...well that was short but very sweet. Thank you for those kind words.... :)