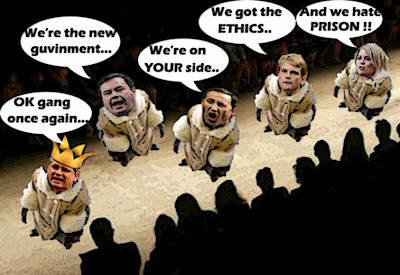 Well they may have padlocked Parliament, but I see the new/nouveau Con cabinet still managed to hold a top-secret meeting.

Prime Minister Stephen Harper and his top Cabinet ministers hunkered down in their ultra-secure meeting room off the Prime Minister’s Centre Block office all day Tuesday, with the new session of Parliament still two weeks away and opposition parties furious over their inability to grill the government over the effect a U.S. shutdown of government services involving 800,000 U.S. public servants could have on Canada.

And I can only imagine how desperate it must have been eh?

What with the Cons still dodging questions about the Senate scandal, even as that scandal just keeps on getting BIGGER.

Another Con senator denying that he solicited illegal donations.

Patrick Brazeau denying reports that he was arrested.

Sen. Patrick Brazeau’s office is denying media reports that he was arrested at his Gatineau home but police and paramedics responded to his house twice early Tuesday morning, the Citizen has learned.

And the PMO disowning him:

A spokesman in the Prime Minister’s Office, Stephen Lecce, released this terse response when asked for comment late Tuesday: “Mr. Brazeau is no longer a member of our caucus. Anyone who commits a crime needs to face the full force of the law.”

Which considering the criminal record of the Con regime is rather ironic eh?

And is not going to make the Brazman too happy... 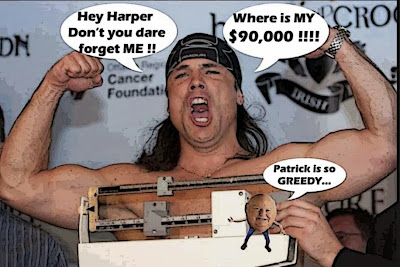 But then of course, the Cons are truly desperate. They've spent the last two months trying to buy votes with OUR money:

They've tried to soften Harper's image by portraying him in one photo-op after the other as the friend of kiddies, kittens, and....um....goats. 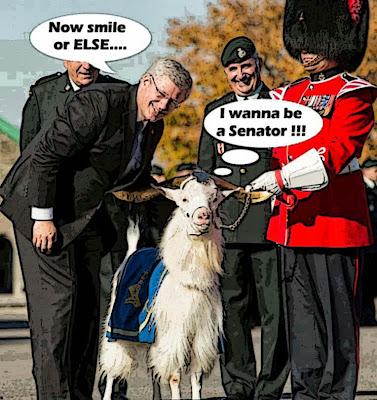 But it's just not working. And with two weeks to go before the grand re-launch I fear that the strain of it all is driving Great Ugly Leader over the deep end eh?

Lordy. What parallel universe is he inhabiting?

Is he still in partial control of his faculties?

And what IS that helmet on his head? 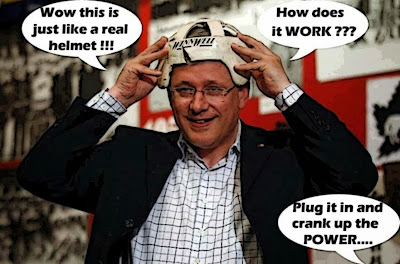 And I can only repeat what I've been saying recently.

We have them where we want them.

And we are going to FRY them...

I think the reason herr harper shut down our parliament then sent his goon squad to BC to push their oil pipeline drug, then went to New York to snub the U.N and tell the NY Times that he won't take 'no' for an answer on KXL, and is now huddled with his cabinet in secret, is because before he did all this scrambling and blustering, President Obama had already quietly and politely told him that his decision on KXL was 'no'.

It wasn't Harper that rejected the U.N. It was the U.N. that rejected Harper. The U.N. Security Council requested, Harper to join 60 other counties, to refer Syria to the ICC to be prosecuted for, war crimes and crimes against humanity Harper point blank refused. ICC did find Harper guilty of, stonewalling and blocking their investigation on, the torture of the detainee's. Harper prorogued Parliament so, he wouldn't have to answer for his crimes. The U.N. Security Council, banned Harper a seat. Harper was livid about that.

Luis Moreno-Ocampo Chief Prosecutor of ICC, at that time. He was considering to charge Harper for war crimes and crimes against humanity. It was thought Harper may have broken the Geneva Convention.

Harper doesn't even have the right to live in this country, let alone govern. There was an article of, Harper and Obama setting up for the NAU. Harper is permitting American Police to operate in our country. Harper is to bring Canada's cost of living, as it in the U.S. Obama is trying to have a health care plan, much like Canada's. However, we also know our Health Care is to be chopped. I believe the Keystone pipeline, was always a go.The NAU has been on the agenda, for a very long time.

Read of: Harper gave a speech in New York at, the Council of Foreign Relations. This was Sept 25/2007. Harper fully endorsed the NAU.

If this man get eleected again, we will show the world that we grossly lack in judgement, just as the Americans did when they elected Bush for a second term. Harper is traitor to the Canadian people to further his ideological fantasies.