The Fatal Trajectory of the Harper Cons 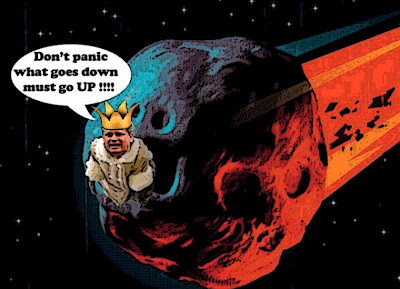 The other day I wrote  about how Stephen Harper's slide in the polls was beginning to resemble a one-way ride on an asteroid.

Not just a mere tumble through space, but a clear and definite negative trend.

And I pointed out that this blazing trajectory couldn't come at a worst time for the Cons.

So what better time to remind them that pulling out of that death dive is going to be REALLY difficult.

Though their slide in the polls almost two years into their mandate is nothing new, the situation the Conservatives find themselves in is unlike what they experienced in the past. In both 2007 and 2010, the Conservatives were consistently polling ahead of the Liberals with little overlap (as is clearly visible in charts #2 and #3).

The New Democrats were firmly ensconced in third place. Now, the three parties are massed together and Mr. Harper is facing off against a tough opposition leader in Mr. Mulcair and, in Justin Trudeau, the Liberals are about to choose a wildcard leader. The trends may not reverse themselves this time.

Especially since the economy is now heading in the same general direction as the Harper asteroid.

Jim Flaherty is about to provide more evidence that he doesn't know what he's doing. 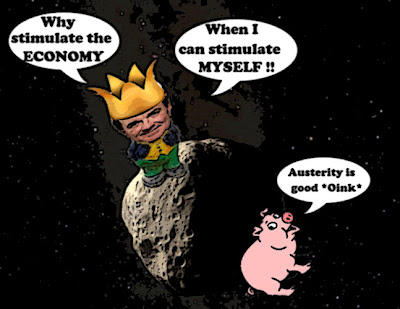 Remind us that he is so obsessed with the deficit, and killing government, he would bleed our sickly economy instead of stimulating it.

And now we're going to remind him, and Great Nice Pretty Economist Buffoon Leader, and all Canadians, that thanks to the Cons we're now number eleven !#@!#!!!

Canada has slipped out of the top 10 countries listed in the annual United Nation’s human development index — a far cry from the 1990s when it held the first place for most of the decade.

For you don't need to be an economist, or a psychic, to predict what we might do with this negative trend eh?

Gawd. I just had a horrible thought eh? Just after that nice fuzzy one.

What if the Cons try to claim that number eleven is better than number twelve? Better than Belgium... or Niger. Like two number ones, or two thumbs up.

Oh please, please, I hope they do.

For then we'll know for sure where they are going... 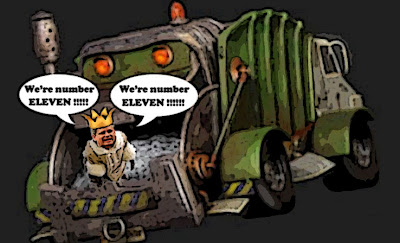 Heading in the right direction, straight to the garbage dump of history.

Duck and cover everybody.

Simon: In the eighties, I was in Asia. The world's developed countries had a rather condescending name for countries such as Singapore which were rapidly improving themselves. They called the latter "Newly Industrialized Countries". Then the Australian economy started getting into trouble. The Asians had their revenge. They called Australia the "Newly Deindustrialized Country".

So why am I telling you this? Because it sure looks like we have a new name for CONADA. It is called "Newly De-developed Country". Sure looks like Harper kept his promise that this country would be unrecognizable when he is done.

Kids to space
Is it still blue and white?
Is there any green, is the ice shrinking, can you see smog?
Hatfield
Well that's a deep subject
Harper
Can you see god?
God
I'm here and I'm coming for you!

hi anonymous...very good point. As incredible as it may seem instead of preparing us for the future, he is taking us back to the past. Except that now instead of being hewers of wood, and drawers of water, we are hewers of rocks, and drawers of oil. It's pathetic, and I only wish more Canadians were aware of what's happening like you are...

hi anonymous...good stuff, you must add music to those words and sing them for King Harper. ;) But please tell god, or Satan, to keep their hands off him until we defeat him...