The Cons and the Reform Gang Rebellion 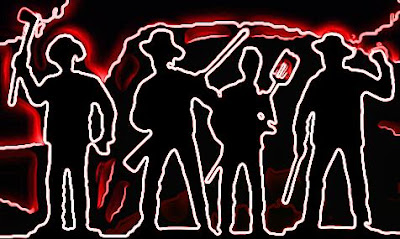 For seven years they held their tongues, so as not to scare Canadians.

For seven years Stephen Harper was able to muzzle them, or force them to make sheep sounds.

But now it's finally happened. The dam has broken. The old Reform gang is revolting !!!!.

It may not rank alongside the storming of the Bastille but a gathering of 20 or so Conservative MPs Monday night is the closest the ruling caucus has come to revolution during its seven years in power.

And you can be sure that Great Ugly Leader is doing his best to nip this rebellion in the bud....er...mouth.... 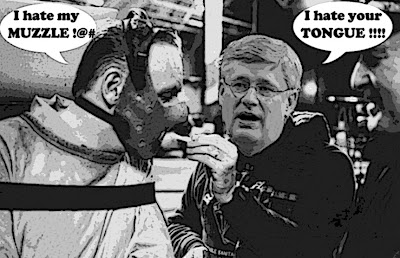 A sense that the rights of the individual MP are under assault has been brewing for some time... The difference this time is that so many Tory heads are popping over the parapet that it is going to be hard for the Prime Minister’s Office to blow them all off.

Because the last thing Harper needs is to have the Reform gang running around shooting off their mouths, or going after women like a pack of hyenas. Or Woody Woodsworth. 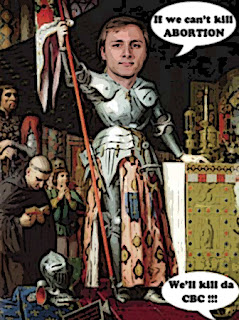 Not at a time when he's trying to soften his image, and become Great Kiddies Kittens Chinchilla Panda Leader. Not when his polls are in this dilapidated condition.

Seven years into his premiership and halfway through his current mandate, Prime Minister Stephen Harper is facing an electorate increasingly unimpressed with his government, a new poll released exclusively to QMI Agency finds.

More ominously for the Harper Conservatives, 50% of those surveyed do not approve of the job the federal government is doing -- a five-point jump in a month -- while 36% approve. That gap between approving and disapproving Canadians is the widest Abacus has found since it began tracking that statistic in August 2011.

But he can't afford to muzzle the wingnuts either, because after cutting subsidies to political parties, he needs his rabid religious base more than ever.

And since they're now so aroused even Jubilee medals won't satiate their foaming fanaticism.

He might be forced to do ANYTHING to please them... 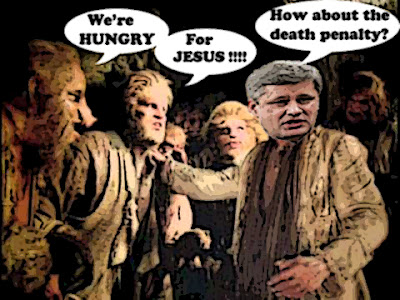 Which will only make his Cons look more like dangerous religious extremists, and make him even MORE unpopular.

Everything is relative. This is not, in the words of the great Malcolm Tucker, “the break up of the Beatles, during the fall of the Roman Empire.” But political parties that don’t stick together, don’t tend to win together.

And the best news is that if the Cons are defeated in the next election, these divisions could cause a fatal split. And return the party to the condition it was in before the Reformers and the Conservatives merged.

So if we defeat them, we could DESTROY them.

You know MY candidate... 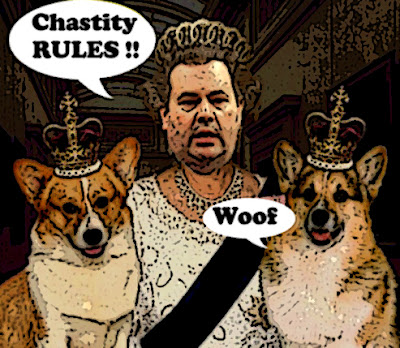 For if I can get him elected leader my work will be over eh?

And so will the Conservative Party.

Hallelujah !!! Give the SoCon rebels a megaphone !!!

The Reform evangelicals are beginning to wake up and realise that they have been used by the corporate faction of the party. Get out the popcorn, because this evangelical rebellion could be highly entertaining.

I'm concerned that somehow this is all part of PMSH's plan. Not sure what the end-game is though. PMO only lets up on the leash when they decide it's in their best interests.

hi anonymous...yes it does look like the Great Awakening, and I'm doing my best to make sure it's as brutal as possible. By sending in comments to SoCon sites urging them to rise up against the Pharaoh, and do what Jesus would have done...;)

hi anonymous...I know what you mean. No doubt there is some scenario in the PMO, where they believe that by thwarting the religious fanatics they can make Harper look like a moderate. But if that's their game I don't think it will work. For as I pointed out in the post, they are so aroused he will have to give them something. And as soon as he does that it will look like he can't control them, and it will be game over...