Jimbo Flaherty and the Day of Reckoning 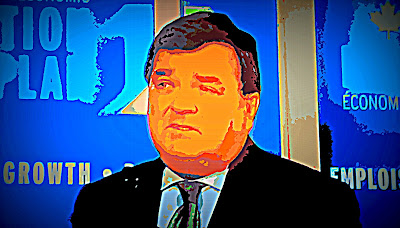 If you wanted to know where our economy is heading, or what the Cons are planning to do to Canada.

All you had to do was look at Jimbo Flaherty today, to know it's not going to be pretty.

And that the Day of Reckoning has finally arrived.

For there he was standing in front of a giant Porky Action Plan billboard, promising growth and jobs. Telling us the economy is shrinking, so what we need to do is kill even more jobs.

Even though at a time when the private sector isn't creating any jobs, and hundreds of thousands of Americans could soon be unemployed.

And austerity is an epic failure wherever it has been tried.

Those government jobs could make the difference between a stagnating economy and another RECESSION.

But then why should we be surprised ? 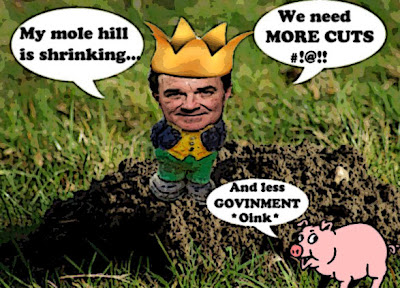 When like the Republican teabaggers in the U.S., Jimbo Flaherty is only interested in cutting services, not raising taxes on the rich. Who are getting richer and richer.

Even as the porky Con regime wages war on the poor and the unemployed.

The document makes it clear the Service Canada employees are to leave no stone unturned in their inquiries, even in the absence of evidence that selected EI recipients had done anything wrong. The document suggests investigators check addresses, bank accounts, medical documents and even the physical appearance of claimants.

And Jimbo the idiot garden gnome morphs into his evil twin... 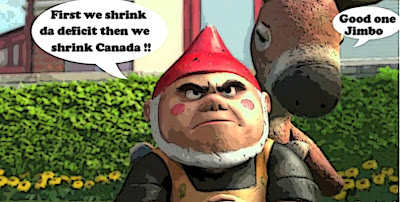 Who like Great Goblin Leader would kill government, bleed national institutions like the CBC and Via Rail further, and privatize EVERYTHING.

Oh boy. You know I had a serious talk today with the donkey in that picture. 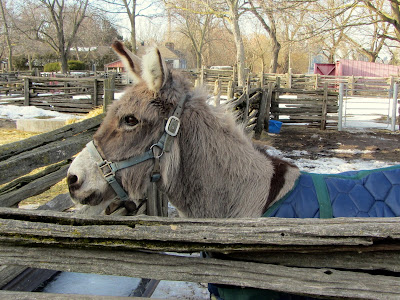 Who said he was sorry he encouraged Flaherty, like so many Canadians did. And admitted that he knows as much about economics as Jimbo does.

But couldn't comment further, because it turns out he's also been privatized. After more than fifty years, the little farm has just been sold by the City of Toronto to the owners of an amusement park.

And who knows what the new owners might do with an old donkey? For in Stephen Harper's brutish Con Canada only the rich and the powerful are safe.

Oh well. Don't worry. I'll be keeping an eye on Jake and all the other animals, and make sure they are treated properly.

But who will save us from the foul Harper regime?

How on earth were so many Canadians fooled into thinking that those rabid ideologues were economists?

And what DO you say to those DUMMIES?

Except, fasten your seatbelts, hang on to your tuques eh?

The Day of Reckoning is here.

And of course thank goodness it's Friday eh?

We will get our gentle Canada back. I promise you.

Have a great weekend everybody....

Canada is a deep abyss of corruption. I am sick to death of greedy wealthy parasites. I don't know a soul, that believes Harper did win the election? They believe Harper used the robo-call fraud and cheated to win. The Saskatchewan Tories are using the robo-call scam too.

Harper is stealing the Canadian people blind. Harper wants to get rid of E.I. and force welfare instead. Welfare is a Provincial responsibility. That way there is more money Harper can thieve, for his own coffers. Same with slashing services. Harper still rips us off for those services and, pockets that money too.

Flaherty should know, about the thieving Conservatives, stealing enough on their expenses to buy homes for themselves.

Flaherty should know. Politicians with their outrageous salary's and gold plated pensions and all the wealthy do not deserve....Free Health Care, Pharmacy drugs, x-rays and other Hospital procedures. No doubt they will all line up at the trough and, squeal for OAS and CPP too. They do not deserve those benefits. They steal enough from us, to pay their own damned way. Those benefits should only be, for those who can't afford to pay.

It is Harper and all of his parasites, that are not sustainable. Why are Canadians paying for that vermin?

hi thwap...you're so right, from Thatcher, to Reagan, to Bush, to Mulroney to Harper, wherever those ruthless ideologues go economic disaster is sure to follow. But somehow the Con klowns have managed to fool a lot of Canadians into thinking they know what they are doing. It's a crazy situation and there will be a rude awakening...

hi anonymous...everything you say is true, everything the Cons do is conditioned by their insane ideology. But the question isn't why are we paying for them. The question is why are so many Canadians voting for them? Once we figure out that one, and unite to defeat the Harperites, we can fix everything else. And make them pay for their crimes....