The Great Con War on Crime and Medicare 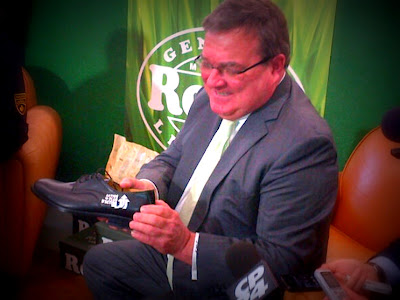 Oh no. Remember how I said the other night that Jimbo Flaherty probably hated having to call his new budget Porky Action Plan 2013?

Because there couldn't be a worse way to sell ANYTHING.

Because there was Jimbo yesterday getting a Porky Action sign engraved on his new shoes.

But then what better way to get Canadians to stare at his feet, while he reaches into their pockets with both hands, and makes BILLIONS of secret cuts.

Each year’s budget brings a new round of cuts, offices shut down, services terminated. In 2011 there was “Strategic Review,” with $2.4 billion in cuts over three years. In 2012 it was “Strategic Operating Review,” worth about $5 billion a year. Last autumn Treasury Board Secretary Tony Clement was put in charge of a new cabinet subcommittee on spending restraint. A news report at the time called the new effort “strategic review on steroids.”

So each year’s modest cuts are followed, a year later, by further modest cuts. It’s like sharpening a pencil. You shave off a curlicue of wood every few weeks and one day the pencil’s gone. 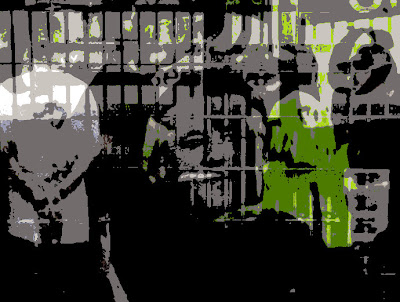 Per capita spending on criminal justice — including federal and provincial jails, court costs and policing — has climbed 23 per cent over the last decade even as the crime rate fell 23 per cent, says a new study by the Parliamentary budget office.

Almost $15 billion of the total last year, or 73 per cent, was carried by the provinces and municipalities.

And their Great War on the Provinces is really a Great War on Medicare. A way to make the provinces poorer, by increasing their costs while capping their transfers, until they are forced to privatize their health care systems.

Because that has always been Stephen Harper's biggest target from the moment he entered politics.

And everything he does is as stealthy as a spider... 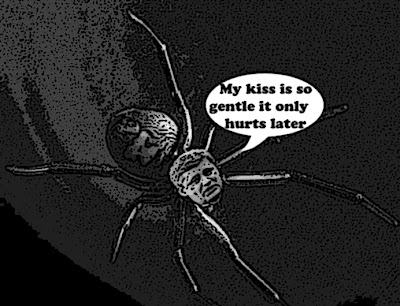 Why wage an unpopular war on medicare?

When you can achieve the same result.

By locking up more and more Canadians for smoking marijuana.

And waging a Great War on Drugs.

Oh boy. You know Paul Wells is right about this:

One thing Stephen Harper learned soon after he became Prime Minister was that Canadians have little intuitive grasp of decimal places.

Similarly, the ability to tell the difference between a little belt-tightening and a wholesale cut to a government service or department is not a widespread skill. So as long as the government offers only the vaguest information about its spending cuts, few Canadians will go searching for details.

And this too is true: unless Canadians learn to read the fine print, or watch Jimbo Flaherty's hands, or Stephen Harper's spidey jaws, closely.

They will wake up one day, in a jail cell.

Or on a stretcher, in a welfare hospital.

In a country they don't recognize.... 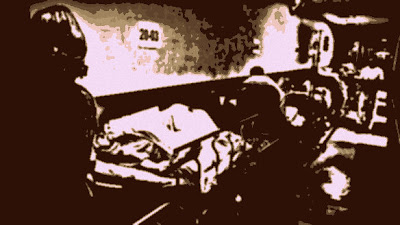 I know Simon, I know. And you know, and you've been saying it for years. But what more can we do!?!

We need to get Canadians, coast-to-coast, to FIRST: appreciate the democracy they have instead of denigrating it. SECOND: appreciate the dangerous precedents that harper is setting and how they eviscerate the very premise of Canadian democracy. THIRD: Come together in large enough numbers, coast-to-coast, and peacefully occupy all Conservative MP's offices until the harper government agrees to resign and face an election fought on the issue of respect for democracy and fought between the harpercons and an opposition united simply to defeat them and hold them accountable and enact proportional representation so that this sort of crap never happens again.

Harper is really not a Conservative. Harper was Policy Chief for his, Northern Foundation Party of 1989. This is why Harper's Dictatorship, is so abusive. This is why, Harper's behavior is so bizarre. Even other country's find Harper bizarre. At every meeting of Nations, Harper is the trouble maker every time. Country's are fed up with Harper and his dictating. They can't stand Harper's hissy fits, when he doesn't get his own way.

Stalin, Hitler and Mussolini all, lied, deceived, thieved, were corrupt, used dirty tactics, dirty politics, threats, were controlling and, all of them cheated to win. Sound familiar? It should?

I think the intention all along since regan thatcher Mulroney times has been to bankrupt the public sector so to privatize and
Iiquidate all public assets. The economic crisis was round two. That is thier economic action plan.

hi anonymous...oh great. Hit me with a hard question when I am at my most vulnerable. And remind me that I've been repeating myself for YEARS. Have you no mercy? ;)
But seriously, it may be taking forever, but the message is spreading. The cons are not nearly as strong or as teflon coated as they once were. The polls are very encouraging. History is not linear. It goes here and there but eventually the pressure builds up and it blows like a volcano. The Cons are still lording it over us with 31 percent of the vote, but they have feet of clay or tar, and sooner or later they will fall. I intend to write about what we can do to accelerate that process when I have a better idea of how the opposition is faring. But at least I now feel that we have the wind in our sails, so we will arrive at the Promised Land some day...

hi thwap...I like everything you say. I think we have to back up the parliamentary struggle with all kinds of other protests. As you and I have discussed before that won't be easy, because our nature and our prosperity have made us complacent. We have taken our democracy for granted, too many are not outraged enough by what the Cons have been doing to it. But being complacent isn't as easy when the economy is not doing well, so I still cling to the hope of a great awakening....

hi anonymous...as you know I don't consider Harper to be in the same category as Hitler or Stalin. Although he is said to admire the way Stalin ran his party. I consider Harper a small man blinded by his ideology, and made worse by being unable to feel the pain of others. He is a mere blip in Canadian hostory, he will be remembered for nothing, and as soon as he is defeated he will be soon forgotten...

hi anonymous...yes that is their overall strategy. It all springs from the foul coupling of Father Reagan and Mother Margaret, and although Thatcherism was a total disaster that eventually led to the collapse of the banking system, the Cons keep genuflecting before it like religious fanatics kneel before the bones of dead saints. It's very depressing on a day to day level, but if you look at the big picture, and at the general direction history is taking us, it's far more encouraging. They are the dinosaurs of today, even if they don't know it...