Captain Harper and the Partisan Threat 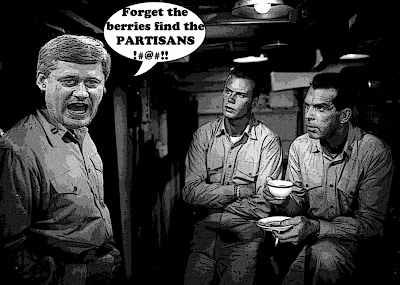 OMG. I don't know how to say this. Because I don't want to cause mass panic eh?

But Stephen "Queeg" Harper is looking and sounding crazier than I've EVER seen him.

At least since the time he lost his marbles strawberries, and turned the PMO upside down looking for them.

For there he was a day after this devastating report was released.

Claiming the authors are partisan, but the C.D. Howe institute isn't.

“Rather than cite the partisan report that the leader of the Liberal party cites, let me cite the non-partisan C.D. Howe, which has looked at this and said that not only …”

Here the prime minister stopped, faced with a barrage of groans from the other benches. The Speaker called for order and Harper continued.

And that his government is TRANSPARENT.

Even though both reports say basically the same thing. He's the most partisan Prime Minister in Canadian history.

And the Con regime is about as transparent as a pool of dirty oil... 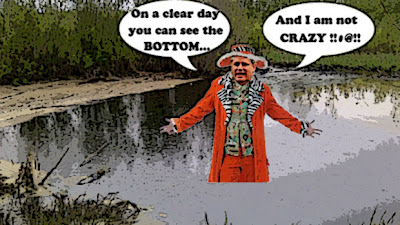 Oh boy. Look, I don't have much time to blog tonight, but I just can't go to bed without issuing this public warning about what to do if you should ever bump into him in the street.

(1) If you can, run for your life in ANY direction except his.

(3) If you are cornered and can't escape, don't say or do anything to inflame him further. Just smile conservatively like you do for your passport photograph. Back away slowly. And say "What up Steve?"

For being dangerously partisan, unlike Great Leader.

Lordy. Who knew we would end up with a maniac as a Prime Minister eh ?

And when will this nightmare be over?

Ya know Simon, Harper is either a raving lunatic or just a common everyday fucking liar. The CD Howe Institute is a a conservative think tank by every possible stretch of the imagination. Just look who funds it. A couple years ago it actually proposed letting the Canada Health Act expire and die. The Health Act is what guarantees universal public healthcare in Canada! The Howe clowns want to let it die… kind of like that other non-partisan organization wanted to kill it – the National Citizens Coalition, of which Harper was fucking President! Non partisan my ass!
I mean CD Howe once had a *ahem* 'report' (cough cough) that *ahem* (cough cough) 'proved' that private garbage collection companies were 'better' and 'saved money. Of course what they didn't let on was that their 'report' was funded by the Ontario Waste Management Association, a lobby group made up of private garbage companies. It would be nice if the media, you know, did its fucken job. So, is Harper a liar? Or just a raving lunatic? I suppose PM Liar (Or Is It Wingnut) would say the Fraser Institute is 'non-partisan' too.
This said, I fear for this country. I fear because HarperLand has free reign to fuck it over for the next couple years unhindered, and after that when an election comes, will sit there and laugh as the Libs and NDP spar with each other through the media, and then wind up splitting all the anti- Harper votes. Harper's 'majority' only represents 39% of the 60% who bothered to vote, meaning 75% of the citizenry cannot stand the Harper CONS and did not vote for them. Yet we get the dumbest most ideological government in our history, a goofy clan remarkably resistant to critical thinking who struggles with complexity of thought, basic honesty, transparency and accountability, and who place zero value on empirical evidence, somehow as a fucking MAJORITY, and they are using it to not to move progressively but to actively go BACKWARD and attack the the nation and it’s people as according to their archaic, failed and frankly fucking selfish and inane ideological dogma. So, the non-Con parties MUST join up and put aside their stupid fucking bullshit pride and whatever other crap they think they are, stand for, and UNITE, at least for this one time, to defeat the stench of HarperLand and the damage it is inflicting upon every corner of the nation’s land, water, air, peoples and reputation. So how do we get this started? Because IMO it is IMPERATIVE.

hi wazz... you know what I find the most shocking thing about Harper these days? The fact that even though EVERYBODY knows the C.D. Howe institute is a conservative think tank, he would still claim it isn't. He lies blatantly about that, or the imaginary NDP carbon tax, and somehow we are expected to accept that, and believe it's normal?
I simply refuse to accept this insanity or depravity. And yes, I am very concerned that unless we unite we will fall short in the next election, and the Cons could win again.
Groups like Leadnow are doing their best by backing Joyce Murray's candidacy, but I'm afraid she doesn't stand a chance, and it's the same thing at the NDP. Both seem to think they can win alone, but unless one or the other collapses I don't think that will happen. I hope I'm wrong, but I'll be watching the polls closely to see what happens...

Neither can win alone, that's about as insane for them to think as Harper's non stop psycho babble. joyce is a good candidate. But can she stand up to Justin's hair? Because the media has coronated that guy already, based on whatever shampoo and conditioner he uses. To me it's a no brainer. They run against each other and Harper laughs like a raving maniac to the PM office again and the country is done for. And if that happens the NDP and the Liberals are as much to blame as Harper and the pyscho-Cons.

hi wazz...as I said I don't want to rain on any progressive parade, especially not at a time like this when hope is in such short supply. However, I can't shake the feeling that we are heading for disaster, and I will speak out more forcefully if and when I get a better idea of where we are going. I was always rotten at maths, but not THAT dumb... ;)