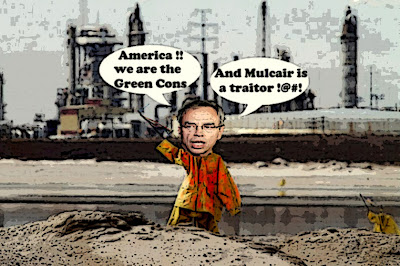 Joe "Oily" Oliver, the screaming scarecrow of the Tar Sands.

Then he promised we would be able to drink the tarry bubbly from the tailing ponds. And that it would taste like prosperity.

Now he's back as crazy as ever, waving his twiggy arms around, and claiming that Thomas Mulcair is unfit to govern.

Oliver said Mulcair's vow not to support the pipeline proposed to take Alberta oilsands bitumen to the U.S. Gulf Coast when he meets U.S. government officials in Washington, D.C., this week is a betrayal of Canada's economic future.

When of course it's crazy old Oily and his Cons who are unfit to govern, and the real tools of foreign interests. They are the ones who are betraying the future of Canada and the planet.

And Mulcair had every right to warn the Americans that they're dealing with a bunch of con artists.

In meetings with U.S. lawmakers and business executives, Mulcair is telling Americans the Canadian government is “playing people for fools” by claiming that its environmental record is world class and that it cares about climate change.

“In the U.S. people know how to read,” he said in an interview. “They know that Canada is the only country that has withdrawn from Kyoto. They know that the Conservatives can’t possibly meet their Copenhagen targets (on greenhouse gas emissions) precisely because of the oilsands. They have to stop playing people for fools.”

Because can you believe it eh? Those ghastly oil pimps have been parading around Washington posing as environmentalists, and trying to scam our neighbours. Have you ever heard of anything so ridiculous and so outrageous? Have those eco-criminals no SHAME?

Supporters of the pipeline have argued that this is oil from a friendly country and that Canada will sell it anyway. We hope Mr. Obama will see the flaw in this argument. Saying no to the pipeline will not stop Canada from developing the tar sands, but it will force the construction of new pipelines through Canada itself. And that will require Canadians to play a larger role in deciding whether a massive expansion of tar sands development is prudent.

As it should have been from the beginning. Because the runaway development of that already massive project is killing good jobs all over the country, leading us to economic disaster, and torching the future of the planet we ALL live on.

We should have a great Canadian debate, but of course we won't. Because Obama will probably approve the XL pipeline, the Cons will plough ahead with their mad project to make Alberta richer, while the rest of us get poorer.

And the only consolation is that with this kind of pressure on him Obama will almost certainly force the Cons to swallow a carbon tax. You know, "the NDP's job killing carbon tax." The Big Lie that they have been bleating about, almost every day, for over a year.

And that should just about KILL Great Green Oil Pimp Leader...

Make him look even more ridiculous, and even more like a STOOGE... 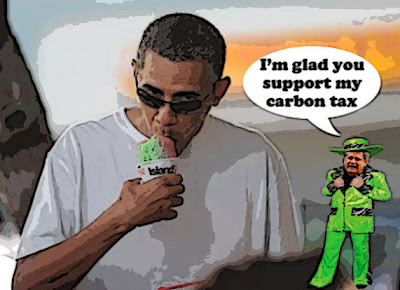 And should convince most sane Canadians that it's time to give those con klowns the hook before they make even greater fools out of themselves. 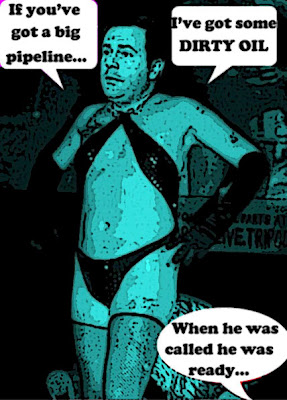 Before people start pointing at us and saying "Those are the idiots who elected them."

Think of Great Pimp Leader choking on it. Or trying to convince people it was his idea, before he was against it, before he was for it again. Or that he isn't insane.

Think of old Oily Oliver, guzzling a little too much of his Tarry Bubbly.

And coming in for a hard landing... 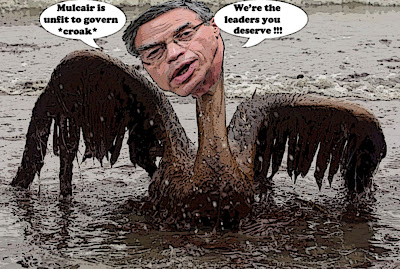 And then ask yourself, how could this monstrous horror show ever happen?

What are we going to do about it?

And how can we make sure that it never happens again?

Hoo-boy! If joe OILiver thinks he's seen any kind of war yet, just wait! The 'murkans are bringing back armed service conscription! Just like israel; EVERYBODY GOES! That means a 2 million man standing army with which to "liberate" the tar sands from the likes of us traitorous fucking Canucks. It's soon going to be "boots on the ground" here even more so than the already serving 'murkan forces in the great white north and it aint going to be Canadian hobnail boots we'll be hearing marching to the tune of "yankee doodle dandee". "Welcome to Ontario, the proud 51st State!" I can see harper's crocodile tears of joy already. Always makes me a wee bit uncomfy to see a big, butch (or is it bitch?) stud like stevie weepy. Oh, well. Like they say in Detroit; "Shit Happens, Then You Die!" Cheers!

hi anonymous...if humanity isn't able to greatly reduce its dependence on oil I have to no doubt that the Americans will one day invade our oil fields, if they haven't seized our water first.
Which makes the spectacle of those oil pimps parading around in Washington posing as environmentalists even more pathetic. They've done everything wrong, they didn't see the Bitumen Bubble coming, and now they are in danger of getting hoisted on their own petard. And taking us all down with them....

P.S. I love your Detroit stories. I was in Windsor a while back, but thanks to you I stayed on this side of the border... ;)

hi anonymous... You know after some days in Harperland I like to stand on the roof flashing SOS into the heavens with my flashlight. I just don't feel I belong here anymore, and I want them to come and rescue me...;)

Don't shine that light too bright because when they get here they will question our patents and then laugh at us for their contents being found in common plants. Then they will inform thier friends who brought us here that there crop has become contaminated and needs
Immediate harvesting. But they will make sure Steven harper is saved to be put in a jar as an example of interstellar stupidity

hi anonymous...don't worry. I am secretly one of them, and will put in a good word for Canada (except Alberta) when they arrive. I will also insist that I get to keep Stephen Harper in a jar, so I can feed it flies, and watch it glow at night.... ;)

No don't exempt albertians .
Here in BC during the last refer in dumb politicians said (granted those with just ear from Alberta club) lets put the francophones in rail cars back home. But things have come along way . On the last day day of legislature before election they were showing off their French on journe francophone while the public and opposition (one suspiciously absent) want them run out of town on a rail. Not BC Rail cause we don't own it anymore. Aftertaste THIS STINKS

And have you heard "oil spill response vessel runs aground after almost colliding with BC ferry"
This vessel was on its way to meet Oliver so he could show it off making an announcement on oil spill safeguards.
Wa wa aw world class my ass
Someone should be following this guy around with a bottle full of what he promises to drink