The House of Manning and the Con Conspiracy 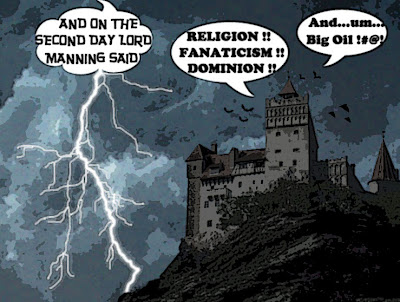 They flew into Ottawa this weekend like a swarm of bats from some dark netherworld.

All there to try to figure out how to make Canada conservative FOREVER.

All there at the invitation of the Con Godfather himself Preston "Parson" Manning, who did beseech his batty flock to mind their tongues.

The Achilles heel of the modern-day conservative movement is people who end up discrediting it when they speak their mind, suggested Preston Manning, the founder of the Reform party, which gave today’s Conservative government its start.

Or keep their hidden agenda to themselves, until the Second Third Fourth Coming of Stephen Harper. Or the Day of TOTAL Con Domination when all things will be revealed.

The Day of Tar and Judgement he has begged his Godzilla to inflict on Canada for its liberal sins, and its heathen ways. The day he is so sure is coming, he can TASTE it.

Immigration Minister Jason Kenney, swiping at the “politically correct views of a narrow class of lawyers, academics, and journalists,” and NDP and Liberals, urged Conservatives on Friday to stick to their guns with the kind of crime, refugee, and economic policies that won over swaths of new Canadians in the 2011 federal election if they want to expand Conservative support more broadly to win the kind of election landslide Progressive Conservative leader John Diefenbaker did in the 1950s. 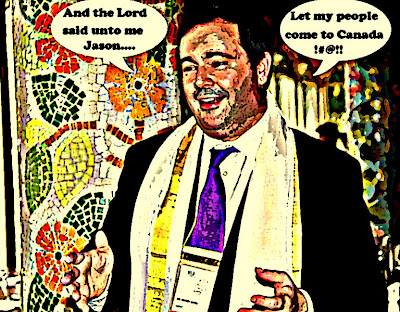 The greasy religious fanatic who would take men back to 1950s, women back to the 14th Century, persecute gay people. And turn Canada into a theocracy.

Oh boy. It would be laughable if it wasn't so horrible. For let's be absolutely clear.  They may look and sound like Con klowns, but both Manning and Kenney are a mortal threat to the Canada we know and love.

Kenney is using his job as Immigration Minister to recruit religious conservatives all over the world, and bringing them to Canada as immigrants and refugees. So they can vote for the Cons, give them a permanent majority, and change this secular country beyond recognition.

And as for Parson Manning, he is also far more dangerous than he appears... 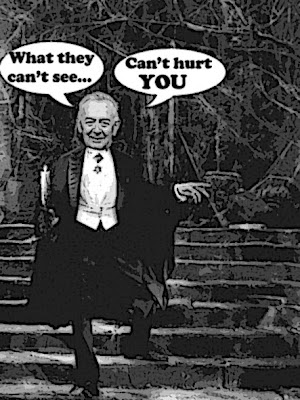 For his sinister Con Skool is training hundreds and hundreds of young operatives, like the pigs trained the dogs in Animal Farm. Those Republican-style fanatics are now the indispensable foot soldiers of the Con regime. The ones who run the War Room, and the PMO. The ones who will do ANYTHING to win.

And ever since he entered politics Parson Manning has been flogging the same outrageous sermon. Pretend you aren't right-wing extremists who want to kill government, until it's too late for Canadians to do anything about it.

Then kill it dead, suck the marrow out of its broken bones until the bloody gunk runs down your faces. Praise the Lord for making Canada safer for Big Oil. And show HIS enemies no mercy.

Because that's what this foul Con conclave was all about, and if more Canadians don't see the growing danger this country is in, we're all in real trouble.

The good news is that even the House of Manning's own polls show that the country is still too Canadian for these theocons to achieve their moment of  Rapture.

Preserving the environment is considered more important than the expansion of our petroleum sector....Loyalty toward the Liberal party is surprisingly resilient.

And as I outlined in my last few posts, we have our own plans to send them to the Hell where they belong. But it would be fatal to underestimate them. Or believe that they will be easily swept away by the coming of a Progressive Messiah.

For they have the government, Big Oil, the MSM, think tanks, and more money and religious fanatics than you can count on their side. And as Manning pointed out in his speech today, they aren't just united, they are FAMILY.

From my perspective, and I hope yours, all of these people who self-identify as some kind of conservative are part of the conservative family. All have something to contribute and the support of all is required to win electoral majorities if our aim is to form governments that can act on conservative values rather than merely talk about them in opposition. Thus the fiscal brother cannot say to the progressive sister “We have no need of you in the family”. Nor can the libertarian uncle say to the social conservative aunt “There is no place for you at the family table” – if we want the family as a whole to be united and electorally successful.

Which makes me wonder again why those who would defeat that monstrous Con conspiracy are not united? And if those grubby alien Cons are family, why aren't WE?

But that's a story for another night eh? Tonight time is running out on me faster than usual. Just like it's running out for Canada, faster than most Canadians imagine. So I'll just say this:

If we don't make absolutely sure we defeat the Cons in the next election we will regret it FOREVER.

For it is a real conspiracy. What we can't see or don't know could kill this country.

There is a monstrous agenda.

And this is the face of EVIL... 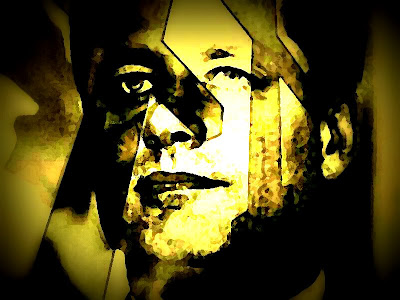 Those Widlrose Party candidates were a real embarrassment to our province during our last provincial election I must say. I really don't think that Canada is as conservative in terms of social values as Manning thinks which has always perplexed me. There's a book a read a few years ago comparing Canadian and US social/political values. A great read actually but I just don't recall the title of the book. I think if we actually had an electoral system that worked in this country, something akin to proportional representation, it would be much harder for the Cons to have attained the results that the did. I like Manning's idea of a smaller federal government and more power to the provinces. I just don't like all the other goofy crap that they stick in their platform along with it.

Harper is an old Fascist Reformer, when he was Policy Chief for, his Northern Foundation Party of 1989. Harper was linked with, Christian Fundamentalists and other dubious links. Harper's profile fits a Dictator, right to a T.

Harper is no Conservative nor, any Christian either. True Christians do not behave as Harper does. Harper declaring himself a devout Christian, is laughable.

Stalin, Hitler and Mussolini had the same typo, dictatorship personalities. All of them had bizarre behavior. So does Harper. Controlling the masses and the media, are at the top of the list for all Dictators. Then they grab control of everything, they get their dirty hands on.

CSIS warned of China's huge inroads into Canada. BC was specifically mentioned because, Gordon Campbell sold BC to Communist China, during his reign of terror. Ex BC Premier Campbell works for Harper. We saw this coming and said so, we were not listened to.

Harper, Ottawa and Alberta, should be kicked out of Canada. Provinces funnel our tax dollars to Harper and, buy houses for Harper's minions. Harper gives our resources and resource jobs to China. 300 BC miners applied for 200 BC mining jobs, Harper gave to China.

We need Harper, Ottawa and Alberta, for what?

I disagree with Anonymous 2:51 on a couple of points.
I think we should keep Alberta; just export all the "oilbertans" to texass. They could hang around with other deranged kooks, just like they are; shoot or hang whatever minority that was handy and get away with it (just like here) and STILL have some of the most useless, illiterate, brainwashed kids on the North American continent so they won't feel like they've lost anything and gained a semi-tropical climate (see storm statistics for texass now versus 30 years ago 'cause there aint no fuckin' global warming) PLUS all the proselytizing they could stand, 28 hrs. a day for absolutely free! Hurry while supplies last!
We could open up the tar sands area as a museum to outsiders to show just how greedy and stupid some of us got while they are discovering HUGE new oil reserves all over the place without tar sands oils even remotely close to being necessary. Don't forget, girls and boys, that we HAVE to sell our oil on the world market, just like everybody else, which means Canada, as a country, doesn't get jack shit from those sales and the offshore "S" (see u.s. tax codes if you don't understand that - also "blind trusts")corporations that the revenue ends up in from those sales don't pay taxes here courtesy of your "Canadian Action Plan" pals in Ottawa. Oh, yeah. I also think we ought to hang onto Ottawa. It's kind of nice what with the canal and all; just clean out all the fucking vermin infesting it right now. ( 2 or 4 legged - all the same)
Well, "cheerio", "pip-pip" and all that horseshit! C ya!
Last note: you're absolutely right, Simon. After seeing first-hand down in the states what oil money can do to elections and government there, we are in a lot more peril than we ever imagine here right now. The guys that run the profit margins for those behemoth corporations here will stop at NOTHING to insure that they retain absolute control and power over our government. If they don't lose the next election ( and by a LOT ), I truly fear that it will take generations of votes ( if ever) to get them out of power. The time to be afraid is now and here.

Anonymous, do we need Harper?....I would say no. Sadly, we seem to be stuck with the goof, at least for a short time longer. I'm not sure I understand the last two. They are merely parts of Canada. I know it does make it very difficult as an Albertan to try and change things when you are consistently put down and insulted though. I see that a lot out here, actually. People want different but grow apathetic because well, why bother, when you're just going to get dumped on. If you feel the need to bash Alberta, I say dump on Ottawa. It was their decision to buy the place up back in 1869 from the Brits anyway.

My apology for not being clear, "Way Way Up". Of course it goes without saying that while taking out the trash, harper goes first. I thought that was understood. As they say in good old Detroit (where I spent much time before moving back to Canada) "Fuck You, You Fucking Fucks!" to fascist, sleazoid harper and all like him as in flabberty, mcguilty, the ford crime family, deb fat-thews, tweeze and, well you get the picture, I'm sure.
Didn't mean to give you any bad moments, there. Cheers

If Quebec were to separate that would make the states a very distant number two. Instead let's get rid of the unholy alliance
Party of Canada while the western separatists amongst them can go to bat just like the PQ and the religious zealots can get
Lost.

Anonymous, spent time across the river from Detroit in Windsor for a few years. Seeing Detroit reminds me of what I hope this country never becomes.