The Cons and the Porky Propaganda War 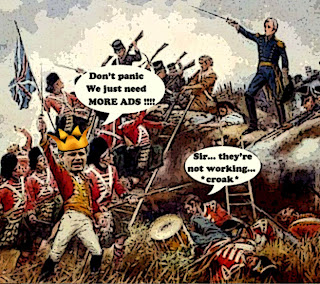 Golly. Sometimes it's the small things that tell you so much about the slow collapse of the Con Regime.

Great Royal Jelly Leader was hoping he could whip Canadians into a patriotic frenzy, by bombarding us with more ads than we could duck.

While he sold us out to foreign interests.

But now it seems the Cons are in full retreat.

The Department of Canadian Heritage abruptly cancelled a planned public unveiling of six competing designs for a prominent new monument to the War of 1812 on Parliament Hill.

Running for cover, trying to hide that blaring boondoggle from the public, despite all the money they have spent on it.

Despite grappling with a deficit that has prompted deep spending cuts in many areas, Prime Minister Stephen Harper’s government has given the celebrations high priority. It’s spending $28 million over three years on dozens of national and community events.

But who can blame them eh? When Canadians have clearly decided that's not the hill they would like to see their tax dollars die on. They would rather celebrate the anniversary of the Charter of Rights. The one Harper ignored.

And now have even stronger opinions about the Porky Action Plan.

Four years after the Conservative government launched its first Economic Action Plan advertising, a new poll suggests that Canadians have become jaded to the continuing barrage of radio and TV commercials. More than half of those surveyed this week reacted negatively to the ads, calling them either political advertising, a waste of taxpayers’ money, or “junk.” 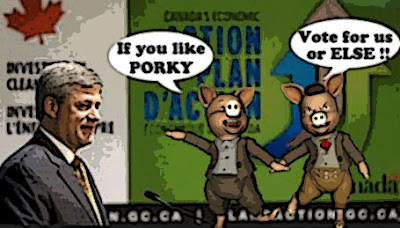 Which is really bad news for Great Hoggy Leader.

Because unfortunately for him, the Cons have wrapped their entire economic platform up in that bacon flavoured bullshit, and made it such a big part of their image, that from now on every time they bombard us with another of those ghastly ads, they'll only be hurting themselves. Shooting themselves in the foot hoof. So much for the Porky Action Plan. So much for the conservative era.

If this is truly a “conservative” era, as advocates are wont to declare, then the era has not shown up in a significant and permanent shift in popular vote in federal elections for this party iteration of the conservative cause.

History will soon be tapping conservatives on the shoulder, reminding them that, whatever the comforts of today, the most lethal of political adversaries worms its way inevitably and inexorably into the country’s consciousness: “time for a change.”

And, speaking of smaller things and junk, so much for Con bloggers. Because when I started blogging years ago this was the most popular political site.

And here's the best part. One BT blogger thinks she knows why.

The ones who aren't dead or senile are too busy watching Sun Nooz TV !!!

Or did, until she apparently thought better, and deleted her post.

Which had me rolling on the floor laughing. Because that is embarrassing.

And of course for once she's right eh?

This is the fate of the conservative movement... 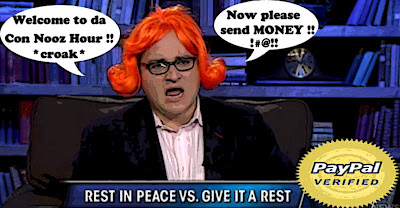 Because slowly but surely the Cons are being marginalized, forced to the wacko fringes like their teabagger cousins in the U.S. Their message is falling on deaf ears. Their old, white, rural base is shrinking. The economy is tanking. One scandal follows another.  Canadians are getting tired of Stephen Harper and his ghastly gang.

And now that the Cons are losing the propaganda war they won't even be able to properly deploy their attack machine. Because they can say what they want. But only the morons who watch Sun News will believe them.

And their ads should look as ridiculous as this blast from the past...

Which should make it so much easier for the rest of us to destroy them.

Golly. Isn't that a happy thought to end the week?

Have a great weekend everybody !!!!!

Hi Simon, The problem with trying to comment on one of your posts is that by the time you're done there is nothing else left to say other than ...Great post 8:)

Mediocre post but a great peanut butter and jelly sammich!

Harper is no Conservative, he is an old Reformer. He was Policy Chief of his, Northern Foundation Party of 1989. That's why Harper insists the government to be called, The Harper Government. Harper is no true Canadian either.

The majority of Canadians say, Harper cheated to win his so called majority with, his robo-call fraud. The robo-call fraud, has now, contaminated the Saskatchewan Tories. The Federal election, isn't even valid.

We are sick to death with Harper's corruption and thieving. Harper's list of his degenerates working for him, is as long as his arm. Gordon Campbell, Christy Clark, Bruce Carson, Wenzel, Parker, Front Porch Strategy, Boessenkool, Brazeau, Duncan, Porter and four others, have warrants out for their arrests. I very likely missed a few. Harper controls the, media, judges, judicial system, police, Elections Canada, Scientists, Ministers and everything else he got his dirty hands on.

Harper is a traitor to Canada, giving us to Communist China. Why is that monster not in prison? The opposition have been totally useless. Harper has no right to even live in this country, let alone govern. Yet that's where Harper, the big fat toad sits and does his, croaking and Dictating.

The wacko crowd is being forced back to the fringes from whence they came. Just in time.

hi Kev...thanks, but I think you're just being polite. It's like Seb said once when I asked him why he never leaves any comments, except when he's away. Crisse Simon where would I start? However, since as you know I enjoy anything you write or tweet anything is great... ;)

hi anonymous...look let's be clear eh? I am not a five star French restaurant. It's Simon's late-night food cart, and when you blog every day for seven years, some days are better than others. Sometimes I'm so tired I get the ketchup and the strawberry jam mixed up. But I do make great peanut butter sandwiches, and firmly believe that as long as you use plenty of bacon you can't go wrong... ;)

hi anonymous...Hmmmm...Harper as a big fat toad croaking and dictating? I love it, so I hope you don't mind if I steal it. ;)
Seriously though, the man really is a monster, and I don't really mind if he doesn't go to prison as long as he just goes. And for the first time since he was elected I think I can see the light at the end of the tunnel...

hi anonymous...I know it's small consolation, but all the horror the wacko crowd have inflicted upon us, may turn out to be good in the end. For it has shown people why Cons simply cannot be trusted to run a country. And I didn't even mention that the planet can't afford them either. Oh well, as I said, I believe the nightmare is drawing to a close, and if I can help cheer up progressives with this humble little blog I'm more than satisfied...

I hope Canadians will not go back to sleep and will react faster when another gang tries this.

Yes and so true and let's hope or pray god ( if we're religious ) that we're not off-side at the next election.