Pope Francis and the Complicity of Silence 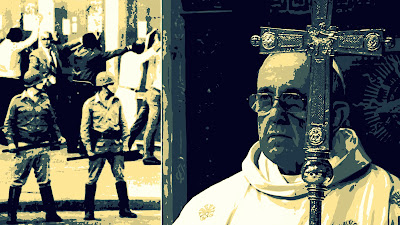 Even though he belongs to the most conservative wing of the Catholic Church, and is a fierce enemy of the equality of women and gay people.

Even though he is an inflexible religious reactionary, like most of the other old men at the Vatican.

I can't help hoping that the first Pope from the New World, this humble man, this friend of the poor, will humanize his church and bring some light into its darkness.

But that will not happen until he bares his humanity, and talks about what he did or didn't do during the infernal darkness of the Dirty War.

And this isn't good enough.

The Vatican lashed out at what it called a “defamatory” and “anti-clerical left-wing” campaign to discredit Pope Francis over his actions during Argentina’s 1976-1983 military junta, saying no credible accusation had ever stuck against the new pope.

For as I found out during a visit to Argentina a few years ago, the truth is both more complicated and more horrifying than just this case:

The most damning accusation against Bergoglio is that as the military junta took over in 1976, he withdrew his support for two slum priests whose activist colleagues in the liberation theology movement were disappearing. The priests were then kidnapped and tortured at the Navy Mechanics School, which the junta used as a clandestine prison.

Because it ignores what he didn't do or didn't say at a time when all around him tens of thousands of people were being kidnapped, tortured, and murdered. Or just vanished. 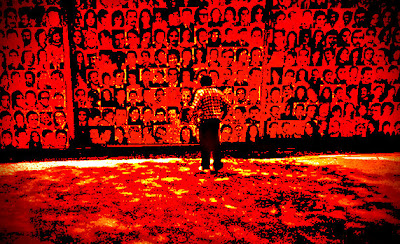 It ignores the complicity of his silence.

”Beyond the details, the main thing is that it’s clear that he was not—by a long shot—at the level needed in the dramatic circumstances,” Gabriel Pasquini, an Argentine writer and editor of the online current-affairs magazine El Puercoespín, told me. There were other clergymen—“Catholic and from other religions”—who “did whatever they could to save lives,” Pasquini added. “For someone who aspires to be a bastion of moral values, it doesn’t seem like a great precedent. Never, in the years he headed the Catholic Church in Argentina, did he acknowledge its complicity in the dictatorship, much less ask for forgiveness.

And it ignores the fact that many of the brutish Junta leaders were also Catholic fanatics, who viewed themselves as being involved in a Holy War against the enemies of Christianity.

Which is why I find this story so intriguing:

Bergoglio in 2010 revealed his side of the story, reluctantly, to his official biographer Sergio Rubin: that he had gone to extraordinary, behind-the-scenes lengths to save the men. The Jesuit leader persuaded the family priest of feared dictator Jorge Videla to call in sick so that he could say Mass instead. Once inside the junta leader’s home, Bergoglio privately appealed for mercy.

Because I'd really like to know what Bergoglio told Jorge Videla, the general they called El Hueso, or The Bone... 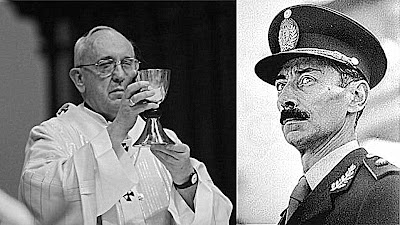 For when Videla was asked in 1977 why his forces had arrested a woman in a wheel chair he replied:

"One becomes a terrorist not only by killing with a weapon or setting a bomb but also by encouraging others through ideas that go against our Western and Christian civilization."

And I can't help wondering what a man like Bergoglio would say to that. Or forget how many crimes were committed in the name of the cross.

Scilingo told the jurors how thousands of political prisoners were thrown unconscious but alive out of planes into the sea during the military's reign of terror in Argentina. Those prisoners who were pushed into the ocean were mockingly called ''comida para los pescados'' (fish food) by their captors.

Scilingo indicated that navy chaplains were consulted on how ''to dispose'' of prisoners, and comforted the officers involved in those gruesome murders. He was so disturbed after his first ''death flight'' that he consulted with a navy chaplain. ''He told me that it was a Christian death because they did not suffer, that it was necessary to eliminate them,'' Scilingo declared later.

Or forget, as I once wrote, one crime that was committed in its very shadow...

A few days later my Argentine friend took me to an old cemetery on the outskirts of Buenos Aires where they had recently discovered some bodies. It was a beautiful leafy place. In the corner of the cemetery was a small ornate building where bodies were once prepared for burial.

It was dark and cool inside. It hadn't been used for years. My friend told me about a young student who was brought here during the dirty war. They held him down on the concrete slab in the middle of the room. And then they jabbed a needle straight into the heart, and injected him with a chemical used to put dogs down.

The concrete table was spattered with what looked like blood stains. There was a carpet of golden leaves on the floor. And a giant crucifix on the wall. It would have been the last thing he saw before they stopped his heart.

I don't know what I would have done if I had lived in Argentina during that fascist nightmare. Would I have had the courage to speak out? Or would I have remained silent like Bergoglio and so many others?

I like to think I would have spoken out, but when I see how the Cons are making a mockery out of our democracy, mixing religion and politics, and ruling by fear, with only a squeak of protest, I have to think that anything is possible.

For when is silence fear or indifference, and when it is complicity?

But then I'm not the Pope. I don't claim to be some kind of moral authority. And I do know this.

The horror of the Dirty War is too enormous to be forgotten or dismissed. Pope Francis must deal honestly with the past, or it will haunt him forever.

And of course, for the murderous right-wingers responsible for this inhuman outrage, and all the other right-wing enemies of humanity. 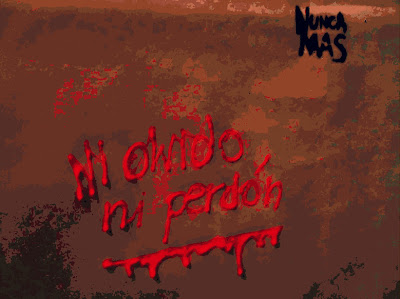 Would you believe the old fascist Videla has once again called for a coup d'État against the Ferrandez Kirchner government? http://www.pagina12.com.ar/diario/elpais/1-216033-2013-03-18.html

In the meantime, President Cristina Fernández Kirchner is meeting the Pope in the Vatican, along with her Foreign Minister Héctor Timerman, who is the son of one of the most famous "disappeared" and torture victims, the journalist and editor Jacobo Timerman...
http://www.pagina12.com.ar/diario/elpais/1-216046-2013-03-18.html
(the elder Timerman was later released and exiled to Israel; there he became very critical of Israel's own 1982 war on Lebanon, though he had been a moderate Zionist before). Jacobo returned to Argentina after the end of the dictatorship, and died there in 1999.
http://www.pagina12.com.ar/diario/elpais/1-216046-2013-03-18.html

I also have some hopes, not of course about the reactionary old Pope's ideas (certainly not about LGBT people and women) but that his call to listen to the poor and to speak of the harm done to creation (the Saint Francis references) can encourage the many (like the late President Chàvez) who drew radically different conclusions from their Catholic faith.