The Cons and the Shaming of the Poor 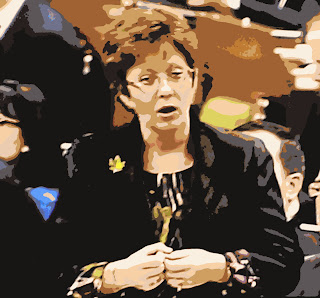 Every time Diane Finley tries to defend why she is waging war on the poor, she claims that it's just a question of saving money.

Just like she did today when Thomas Mulcair went after her for ordering EI inspectors to barge into the homes of the unemployed.

“Service Canada has a responsibility to find and stop inappropriate claims and to protect the funds that Canadians have paid in the system,” Finley said. "Last year, the employment insurance program lost hundreds of millions of dollars due to inadmissible claims."

Even though what she's really doing is trying to shame the poor, like the Cons in Britain.

The report argues that the government is "deliberately misrepresenting" the poor, blaming them for their circumstances while ignoring more complex reasons, including policy deficiencies. Moreover, they feel that this scapegoating is the result of collusion between politicians, the media and the public.

Who are appealing to the worst instincts of the rabble.

A politician is one thing but these attitudes are spreading and hardening among ordinary people too. Indeed, poverty seems a trigger to inspire hate speech that would be quickly denounced if it related to race or gender.

And counting on media like the goons at Sun TV, to portray the needy as greedy, and whip up hatred against them. Even though their only "crime" is being poor. And even though they can't defend themselves.

Poverty is a big domino – once it falls, everything goes. In such circumstances, if a group of people are "deliberately misrepresented" then there's precious little they can do about it. The churches got it right – if anything, the truth seems so much worse that it must surely be time to put the shame back into poor-shaming. Just like slut-shamers, poor-shamers are bullies, and right now they're getting away with it.

And why are they doing this? Because the Harper gang are the worst kind of bullies. They want to turn us into a low wage economy. They see EI as a good way to make the provinces poorer and poorer.

Until they can't afford medicare. 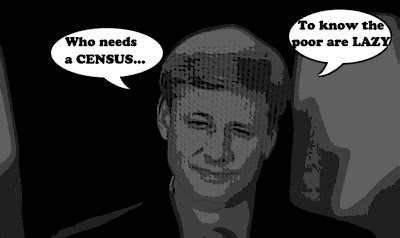 And of course because a Con, is a Con, is a Con. Who would profit from the misery of others, enjoy it, blind us to the horror, by gutting the census.

The United Nations right-to-food envoy says the Canadian government's controversial decisions to scrap the long-form census and negotiate a free trade deal with Europe will make it more difficult to fight poverty in Canada.

"First, in order to effectively combat hunger, food insecurity and malnutrition, it is necessary to have a comprehensive understanding of who is hungry, food-insecure and malnourished," the report says.

Have one set of rules for the poor, and another for their friends.

“The Auditor General revealed that when it comes to expenses, the Senate operates on the honour system. Senators are not required to provide any documents even as they submit claims for tens of thousands of dollars,” Mr. Mulcair recounted. “Why the honour system for senators and home interrogations for the unemployed?”

“Why do the Conservatives continue to defend Pamela Wallin, Mike Duffy and Patrick Brazeau while treating the unemployed as if they were a bunch of liars and criminals?”

And would conspire to turn Canada into a JUNGLE.

Because it really is one big conspiracy. The Cons are really going for it.

The masks are really coming off now... 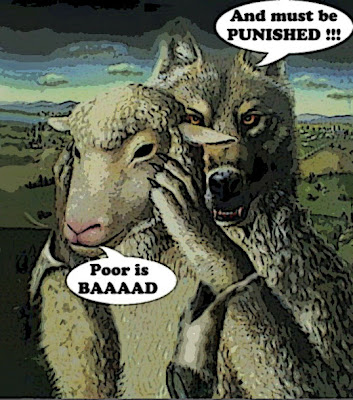 And if we don't unite to stop these brutish ideologues.

And then defeat them.

They'll rip the guts out of this country...

Right. 300 BC miners applied for the 200 BC mining jobs, Harper gave to Communist China. Why don't Harper's E.I. Police, go knocking on their doors? How about the jobs in the tar sands, Harper gave China?

We have thousands of, University and College Grads with huge student loans. The can't have those resource jobs. China's resource workers earn, $800 per month. That doesn't even pay Canadians rent. Chinese send all of their money home to China.

Harper is committing crime after crime. However, Harper is a neo-Nazi is he not? All Dictators are criminals. The opposition do nothing, to get rid of Harper. I would rather the rest of the provinces, make our own decent and good Canada again. Leave Harper, Ottawa and Alberta on their own. We don't need nor want them. They are not Canadians.

More Corporate tax cuts to come. Spending scandals in the senate. Tax cheats moving Billions offshore. We're not being parasitized from below by the poor and unemployed, as the Cons like to tell us. We're being sucked dry by their friends from above. And every year the straw gets pushed deeper.

hi anonymous...well I wouldn't go as far as you. How about we get rid of Harper and his gang, but keep Alberta. There are some good Canadians there, and Harper is not as popular in his adopted province as he once was. Besides I've always wanted to visit Jasper, and I don't want to have to use my passport to get there... ;)

hi Rick... you're absolutely right. This country is being parasitized by the Cons. And since the rich are getting richer, while the poor are getting poorer, it's clearly a problem that comes from the top not the bottom.
But as I said in the post, I fear that the Cons have decided to go for it, and do as much damage before they get turfed out. So I am not looking forward to their next ghastly budget. But hopefully it will be the straw that breaks the came's back, and makes more Canadians wake up...

Does this ignorant bitch have the slightest clue at all? The Cons are not doing this because they think it will save money – that's a crock of shit - they’re doing it because it will pressure Canadians into accepting poorer wages and poorer working conditions, to appease their bullshit private sector overlords. Just like they introduced a program that allows companies to pay temporary foreign workers lower wages than they would pay Canadians. And why they stole $50 mil out of the EI fund, declaring it 'surplus' and capped it. That was 4 years ago. But now they've invented ways to boot people off EI and raised premiums (which is just a tax, of course, ironic hey from the 'tax hating' Cons).

So, with tougher eligibility and lower payouts and higher premiums - the Harper Cons have basically invented a scam where they can effectively steal from EI funds, which PEOPLE pay, by guaranteeing another surplus. Which they will again, steal. Stealing is a difficult concept to sell, though, so they cover it by framing the debate as 'welfare fraud' by the people who pay into the fucking thing. The Con changes in EI are about increasing the surplus, so they can steal the money; not about helping the unemployed, or anything like that. And it's a plan started back in 2009 when they changed legislation.

Meanwhile the Senate runs amok with thievery and abuse, the 'trickle down' private sector is trickling down sweet fuck all as it sits on half a billion courtesy of handouts from the Harper brigade, and $80 billion more is stashed in the Cayman Islands and in offshore tax havens so these deadbeat assholes can further avoid taxes and any responsibility. As Harperland's stormtroopers go door invading honest worker's homes to harass them for being a seasonal worker and being temporarily unemployed. If I was a hardworking Canadian who worked for 25 years, was suddenly laid off due to Harper's shitball economy, or was a seasonal worker temporarily laid off and lectured I had to take a job 100 miles away at 30% less pay or be cut off from what I paid into by some Harper government intruder showing at my door treating me as if I were some kind of a fucking criminal, I'd kick him square in the balls and say 'take that back to Harper' you little prick.

There are already rules and laws in place to prevent/prosecute fraud; we don't need this horseshit of inspectors going around. And because these bullshit inspector bumblefuckers are pressured to get numbers by the Cons, they are inclined to deny benefits in cases where there is likely no real fraud at all. It's just another conservative scare mongering campaign. Not to mention 'integrity officers' are a fucking JOKE when folks are seeing a such a lack of integrity within the HarperCon government itself.

Oh what a disaster this country has become.