Stephen Harper, the Scientists, and the Spaceman 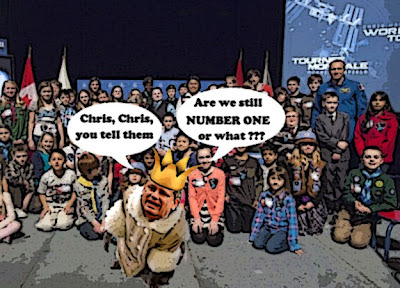 It could have been a truly great occasion.

A group of Canadian kids getting a chance to talk to a real Canadian hero, Chris Hadfield.

But of course he HAD to be there.

Hundreds of school children have chatted live with Canadian astronaut Chris Hadfield as he orbits the earth, and now Prime Minister Stephen Harper has had his chance, too.

To get his picture taken with Hadfield and the children, to try to make it look like he's a Great Space Leader, and that at least in space we're STILL number one !!!! Even if we aren't on Earth.

And of course to moderate the questions he asked his loyal subjects to submit:

Only to discover that some are more loyal than others...

But then who can blame those galactic rebels eh? When although the space station is an orbiting laboratory, in his congratulatory message to Hadfield Harper never ONCE used the word SCIENCE.

He is on a demented crusade to muzzle scientists.

Federal Information Commissioner Suzanne Legault is being asked to investigate the “muzzling” of Canadian government scientists in a request backed by a 128-page report detailing “systemic efforts” to obstruct access to researchers.

So crazy is his desire to control and suppress information, he is now going after librarians.

Federal librarians and archivists who set foot in classrooms, attend conferences or speak up at public meetings on their own time are engaging in “high risk” activities, according to the new code of conduct at Library and Archives Canada.

The code, which stresses federal employees’ “duty of loyalty” to the “duly elected government,” also spells out how offenders can be reported.

And him and his sinister Con regime are the worst enemies of science this country has ever seen. Ghastly right-wing teabaggers who would put faith before reason in the name of Big Oil, rule by fear, and shame this country in the eyes of the world.

Oh boy. When you think about it, it's almost unbelievable to think that such a thing could happen here.

And when you think of what Great Space Leader might do to what's left of our scientific establishment in his next budget... 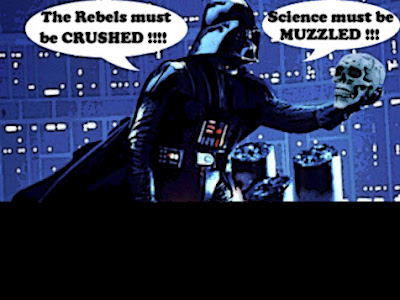 It's enough to make you shudder. Or pick up your light sabre.

But since it's Friday, try to think of the bright side eh?

Canadians know a hollow photo-op when they see one.

Harper will NEVER be a Canadian hero like Chris Hadfield.

In his twisted parallell universe he is going nowhere... 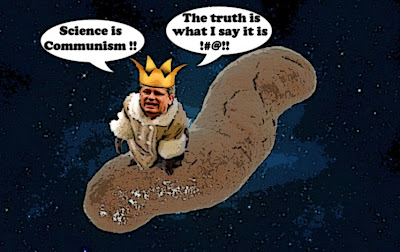 Just heading for a smelly end in the next election.

And high above the horror of Harperland, where Harper can't muzzle him, Chris Hadfield is no doubt singing this song...

And reminding us that Canada isn't Harperland. It's better than that eh?

And we WILL get it back.

Simon to Major Tom: Thank God it's the weekend.

Have a great one everybody !!!!

The public service should collectively tell him and his whole crew of losers to go fuck themselves.

I am sick to death of, seeing the sight of Harper's face. Er at least, I think that's Harper face? He ruined that program that was to be, for the Children.

Harper had no right to even be at that school. Harper is totally against Science. What kind of a message is Harper sending, to our school Children? Harper is a litany of, lies, deceit, corruption, thefts, dirty politics, dirty tactics and, he cheats to win.

I feel so furious when Harper says? On behalf of the "Harper Government" and, the Canadian people.....I don't want a monster such as Harper, speaking on my behalf. I wouldn't even permit, someone such as Harper in my house.

Stevie slime obviously hasn't read any of the labour jurisprudence. Of course not many want to chance it and be fired and then grieve their way back to their jobs.

Stevie slime is actually violating the Canadian constituation which gives people the right to free speech and the freedom of association. If Stevie slime keeps up these types of directives someone might have to arrest him.

At one time some of the federal government unions used to be quite outspoken on issues like this. NOw it maybe. the MSM isn't publishing any of their comments but you'd think they would get the message out somehow. Unions themselves are able to critize the government. You gotta wonder where the PSAC is or the Proffessionals Union or the C.L.C.

hi thwap...I wish they would, and if they took their action to the streets, I would be sure to join them. For we have a very decent public service, and the way the Cons are treating those workers is absolutely appalling. Where did they ever get the idea that they can rule by fear? Who do those thug bullies think they are? And of course when oh when can we get rid of them?

hi anonymous... You're not alone in hating the sight of Harper's face. I've never known a Prime Minister who was so despised. Even I don't dare mention his name in public lest it cause somebody to start telling me how much he he or she hates him. And yes, when I read or hear the phrase the Harper government it turns my ears red. ;)As I told thwap who does he think he is, and when Kev asks can you see his ego from outer space I'm sure the answer will be yes...clearer than the Tar Sands...

hi e.a.f...I'm glad I'm not the only one who finds something really weird about this oath of allegiance to the "duly elected government." It really does sound like something out of Big Brother, or something you might expect from the dictator of some Banana Republic. I keep telling people that this isn't normal, that no democratic government should act like this, but sometimes I wonder whether enough Canadians understand where these Cons are leading us. Because they may be Con klowns, but they are acting like fascists, and they are both twisted and dangerous...