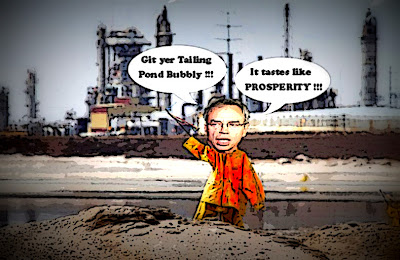 As you know Joe Oliver has had some pretty bad news conferences eh?

Like the time he called environmentalists radicals or dangerous extremists.

Or the time he claimed we would be able to drink the tarry bubbly from the tailing ponds.

Well, the other day he held another big photo-op in Vancouver, and it was even more ridiculous.

The federal government rolled out eight new measures on Monday at the Port Metro Vancouver office that it says will create a "world class tanker safety system."

Not just because the Cons are closing a major coast guard station. But also because the star of the photo-op wasn't able to put in an appearance. Due to circumstances beyond its control.

An oil spill recovery vessel ran aground en route to a federal announcement on oil tanker safety in Vancouver on Monday, officials have confirmed.

The vessel was making a 12-hour trip from its base in Esquimalt to Vancouver for a tanker safety announcement by Federal Transport Minister Denis Lebel and Natural Resources Minister Joe Oliver when it struck an uncharted sandbar near Sandheads at the mouth of the Fraser River near Steveston.

And what does Joe Oliver have to say about that? 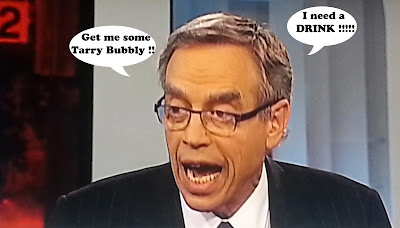 And what do I have to say about this debacle?

Anybody who believes what those ghastly Con oil pimps have to say about ANYTHING has got to be either totally dumb, or absolutely CRAZY.

And of course, I can't wait for Joe's next photo-op...

Bad for Canada. Bad for the planet.

12 hours from the island, and then 12 hours home to Esquimalt - what did that 'no show' cost us?

By the time that ship leaves Esquimalt and gets to a spill on the north coast at Kitimat BP will be finished cleaning its Gulf oil spill.

I think it was a one hour trip but 11 hours to get it back off the sand bar.

As hard as we have tried to say, no more pipelines, no more tankers in BC? Just try and get that through, Oliver and Harper's blockheads. That is an exercise in futility. Harper, Oliver and Premier Redford, are quite willing to pollute the entire planet with, the dirty Bitumen. They are finding tar sands pollution now, in most, Alberta's lakes and waterways.

Harper is a total idiot for, shutting down the busiest Coast Guard Rescue Base in Canada. That the oil recovery ship hit a sand bar, is no surprise to BC people.

The channel the massive dirty oil tankers from China is very narrow because of, under sea rock ledges. The giant tankers from China, have to do hairpin turns, to get around the many islands on the way into Kitimat Port. It takes three miles, to get one of those behemoth tankers to stop.

This must one story Joe Oliver hoped no one would find out about! One of those bitumen all-eggs-in-one-basket must have jumped out and blown up in Oliver's face. He has yok all over him on this one. I thought the man looked more uncomfortable than usual at the photo-op announcement, (sans the clean-up vessel!) That vessel by the way carries skimmers, those floating foam booms, which, of course, are absolutely useless in cleaning up heavy bitumen which sinks to the bottom of bodies of water. The Kalamazoo oil spill in Michigan has proven that such skimmers do absolutely no good. Please - always have your 'spin' radar on high alert whenever Cons have something to announce, especially if the announcement is related to big oil and tar-sands. Peace

hi anonymous...yes I too would like to know how much that photo-op cost us. And yes 12 hours, can you imagine how much damage could have been caused if it had been a real oil spill. And also note that it hit an uncharted sand bank, how many of those are there I wonder? And all this happened apparently when the sun was shining. The way these oil fanatics are trying to con Canadians is absolutely appalling...

hi anonymous...oh well that's reassuring. ;) Having grown up by the sea I don't think you could ever make those channels safe enough to have fleets of tankers travelling through them. And I consider this Con offensive to convince us it's safe an absolute joke...

hi anonymous...yes I think you're right about the eco-terrorist label. The part that always sticks in my mind is how to portray environmentalists as some kind of foreign conspiracy. When considering who is on the side of the Cons is absolutely hilarious. Until I think of giant tankers trying to execute hairpin turns, and then it becomes a nightmare. But of course a nightmare you should resist, for the people of BC will not be alone. You have many supporters all over the country...

hi anonymous...yes I'm sure old Joe wanted to cover up that one. I can only imagine the conversations going on behind the scene, no wonder he looked so uncomfortable. I'm going to have to put a crown on him as well and call him King Bitumen. For everything he touches turns to tar or worse... ;)