The Cons and the Big Boiled Wolf 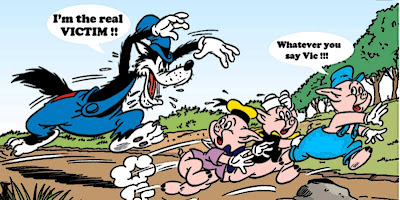 When I hear Vic Toews howling that he's being victimized. WAAAAAAAH !!!!

Because he can't do his job after being "anonymously degraded" by Vikileaks.

"I take strong issue with the idea that House resources would be used to attack secretly a member of the House," Toews said, adding that the anonymous account was degrading his reputation and obstructing him from carrying out his duties.

When I see Dean Del Mastro trying to make Vikileaks sound like more of a threat to Parliament, than the conspiracy to steal an election. While straining his large sphincter to see how many times he can use the word "sleazy."

“I find it very distressing when we actually have an individual who was caught by an investigation by the Speaker .... who was forced to come forward and acknowledge the dirty, sleazy underhanded tactics that he undertook,” Mr. Del Mastro said.

Mr. Carroll has got a lot to answer for, Mr. Del Mastro added. “Did he use House resources for this? Was he being paid by the taxpayers when he was conducting this dirty, sleazy attack on a sitting minister?”

Because Cons don't do sleaze eh?

Because the Cons don't do that either. Just like they don't do dirty tricks.

When I see all of the above, and I see how some in the media are swallowing that phony plot.

I can't help thinking of a great new ad from The Guardian, where they take the story of The Three Little Pigs and the Big Bad Wolf.

And give it a new narrative...

The Harper Cons. Where reality is whatever they say it is. The Big Lie is focus group tested. Internet freedom is a threat. Whoever controls the message controls the world.

Stephen Harper is a maniac. And Big Brother meets Karl Rove....
Posted by Simon at 2:12 PM

Boo hoo. Poor Vic Toews can't do his job now that people know what the real Vic Toews is like. Maybe he shouldn't have had that job to begin with. You can't rely on presenting a false image to be a minister.

If it's the duties of the Minister, and the particulars of the person holding the position of Minister have become harmful to the execution of Ministerial duties, the honourable thing would be to resign for the good of the country.

If Toews himself claims that he has been obstructed from carrying out the duties of the Minister, then why hasn't he been replaced with someone that can execute those duties fully?

hi anonymous...boo hoo...that's just what I thought. Is Toews a giant Venus Fly Trap from the jungles of Paraguay, or a dainty little flower?
And he's the Minister of Public Safety? This Con government isn't just a horror show, it's pure theatre of the absurd...