Stephen Harper and the Con Robots 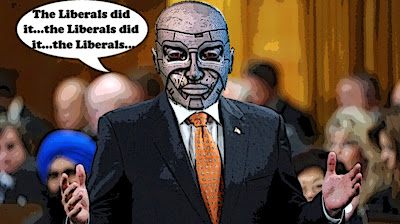 Well there he was in Question Period, looking and sounding like a robot, refusing to say why his Cons are refusing to cooperate with Elections Canada.

Repeating the same answer over and over again.

“Mr. Speaker, I gave clear answers regarding the activities of the Conservative party of Canada,” he professed. “All this information has been available to Elections Canada since the beginning. Now is the time for the opposition, which has spent millions of dollars to make hundreds of thousands of phone calls, to give all its information to Elections Canada.”

As did his robot poodle cow Dean Del Mastro.

“The opposition paid millions of dollars to make hundreds of thousands of phone calls,” Dean Del Mastro read aloud from the script on his desk. “Before continuing these baseless smears, they should prove that their own callers are not behind these reports.”

Making a mockery out of Parliament.

For the sake of making a more efficient use of his time, Mr. Harper might as well have provided Peter Van Loan with a tape recording and instructions to press play at the appropriate time.

But then who should be surprised eh? When Great RoboCon Leader hates Elections Canada almost as much as he hates the Liberals.

His loathing for the election overseers was almost pathological, recalls Gerry Nicholls, the conservative commentator who worked with Mr. Harper at the NCC. It was a “blood feud,” he says, one that appears to be “never ending.”

And his Cons are just trying to deflect attention from their grotesque conspiracy to steal an election. Again.

With the help of the robot Speaker. 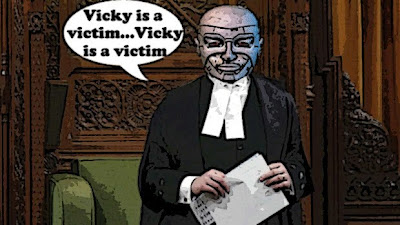 Scheer said that when MPs are personally threatened for their work in Parliament, it must be taken seriously.

"These threats demonstrate a flagrant disregard of our traditions and a subversive attack on the most fundamental privileges of this House.

As if the Cons  aren't showing a flagrant disregard for our Parliamentary traditions, and their plot to steal an election isn't a subversive attack on the fundamental principles of our democracy.

But that's OK eh? Because this scandal can only get bigger.

For it was Nixon who famously said: “It’s not the crime that kills you, it’s the coverup.”

Yup. As I've said so many times before, we have those Votergate Cons where we want them.

And sooner or later we will destroy them... 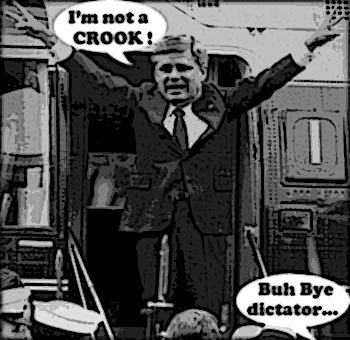 I mean we have to eh?

Before they turn this country into a police state.

What disgusting hypocrites. Expecting us to care about hypocrite Vic Toews, and claiming that they care about Canadian "traditions and Parliament's fundamental privileges" as if Toews' fascism and hypocrisy were what they were all meant to defend.

Toews should've been ousted after the "you're with us, or you're with the child pornographers" gaffe. He was referring to the people of Canada, not an opposition MP and is clearly unfit for his post or any other cabinet post. Anonymous is currently acting as our official opposition so bring on more videos. A threat to an idiot like Toews, hardly, he opens his pie hole and creates a firestorm out of utter nonsense. Good riddance .

The Sixth Estate uncovered some more chicanery from Toews (and it's not personal):

1995
* The year Vic Toews entered the legislature representing the Manitoba PCs, the party covertly funded left-wing independents in order to split the opposition NDP’s vote. Although there was a judicial inquiry, nobody was ever charged, the premier was not held responsible, and the wife of the man who was held responsible, Taras Sokolyk, was appointed by the Harper regime as the EI Referees’ Board chairwoman in Winnipeg.

hi thwap...yes this kangaroo court, and comparing Anonymous and Vikileaks to stealing an election really is the limit. But it just shows you how important it is that Bill C-30 be scrapped, because I can only imagine what the Cons would do if they had that tool at their disposal....

hi bcwaterboy...I honestly believe that the old bigot is making an absolute fool out of himself. He never apologized to the people of Canada, and if Harper had any decency he would fire him immediately. But of course he doesn't so this kangaroo court will continue. All I can say is that I look forward to a real court sentencing the Harperites one day, and you will find me in the front row, munching on popcorn, and demanding the death penalty. I'm opposed to the death penalty of course, but for them I'll make an exception... ;)

hi Beijing...I've written about the 1999 incident, and wondered how he ever thought he himself would make a judge. But it's the first time I've heard of the 1995 episode, and all I can say is how typical. The man is a fascist beast and a hideous hypocrite, and should have been fired long ago...