The Cons and the Big Oil Budget 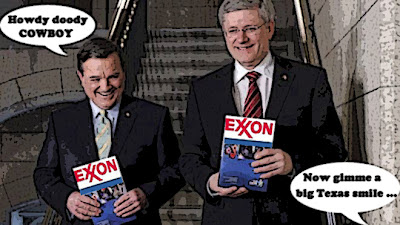 Hoily oily. I can't even do my own taxes eh? But it only took me about five minutes to figure out Jim "Jimbo" Flaherty's ghastly budget.

And all I can say is that Jimbo and his fellow Con man Stephen "Greasy" Harper should be arrested for fraud. For trying to fool Canadians into thinking that the budget has anything to do with jobs and prosperity.

The budget is called “Jobs, Growth and long-term Prosperity,” yet it outlines plans to cut 19,200 positions in the federal public service – including 600 executive jobs.

When of course it doesn't, unless you live in Alberta or Saskatchewan. Which figures eh? Because it was clearly written for and by the cowboys from Big Oil.

He has stacked the deck in favour of resource exports at the expense of environmental opponents, the so-called “radicals” who have been in his crosshairs, and now largely kicked to the curb.

Anyone who lays pipe hit the gusher and anyone who mines hit the motherlode in this budget crafted by a government which sees old-style resource riches as the path to 21st century prosperity.

Anyone who opposes with the help of foreign cash is caught in a tightening government vise administering charities, as of Thursday.

And will do nothing to help provinces where the Con's Made in Texas policies have killed more than 500,000 good manufacturing jobs.

Ottawa is promising to compensate provinces for the fact that this change will impose two years of additional welfare costs for Canada’s poor, though welfare is generally less generous than the combination of federal OAS and GIS.

Because let's face it eh? Making poor old people wait for two more years before they can collect a little more money is as low as you can go. Right down there with screwing the young and the planet.

And of course it's tacky and cheap.  For slashing the CBC's budget just to please your rabid base is about as classless as you can get, without walking on all fours and squealing like a pig. And just another way of destroying the beautiful Canada Stephen Harper hates so much.

And the good news? This grotesque Alberta-First budget is made to measure for Thomas Mulcair. Who can use it to attract the support of the old and the young.

“The Conservatives were elected on a promise to create jobs, instead they're slashing health care, they're slashing pensions,” he said. “In the long term, the continuation of these Conservative policies will leave the greatest economic, ecological and social debt in our history, in the backpacks of future generations.”

As well as harvesting the winds of regional alienation, and turning them into a whirlwinds, that will sweep the Cons away like tumbleweed stinkweed.

And he already has a pretty good wind in his sails.

And the even better news? Before Mulcair defeats them, we may be able to arrest them. 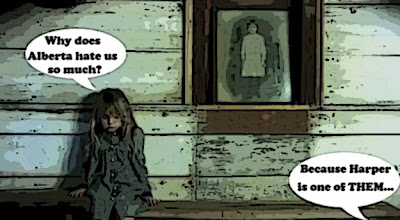 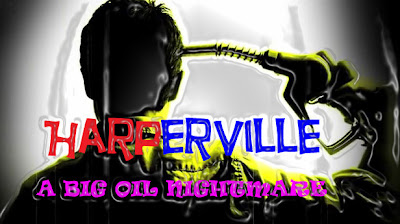 Golly. Who knew regional alienation could feel so good eh?

Who knew young and old Canadians could find common cause?

We have the Cons where we want them.

Speaking from "ground zero" of the Alberta oil industry, they sure aren't putting many dollars into services here.

I can't say I'm looking forward to Jimbo's next job either as Premier of Ontario. He started today with his comments on Ontario budget and how the province is being run.

Extracting Canadian resources & shipping them overseas is not going to make Canada prosperous. It will make Canada poor & unlivable.

As an oil/tar producing nation the Canadian $ continues to remain high which has resulted in the loss of 500,000 manufacturing jobs. There will not be 500,000 extraction jobs to replace them. This therefore leaves a lot of Canadian's unemployed.

The neo-cons have not shown any willingness to provide subsidies to those who become unemployed as the result of their policies. In fact they are forcing people to work to 67.

As unemployment in the country grows maybe people will wake up & see what is going on. The neo cons want to cut pensions, have cut medical funding, have not met their responsibilites to First nations People. To top it all off, the party who says they are best to run the financial affairs of the country continue to rack up deficiet after deficiet.

With this continued deficiet they want to continue purchasing jets worth billions. The neo cons took us into two wars which cost a lot of people their lives & health. This also cost billions. How about spending those billions in Canada.

If Harper & his neo cons was to spend billions how about enviornmental clean up, providing clean running water for all citizens, providing adequate housing for citizens, etc. I know this doesn't reward the foreign corporations but hey, they aren't Canadian. It is about time the government has a Canadian first policy.