RoboCon Scandal: The Cover Up Starts to Unravel 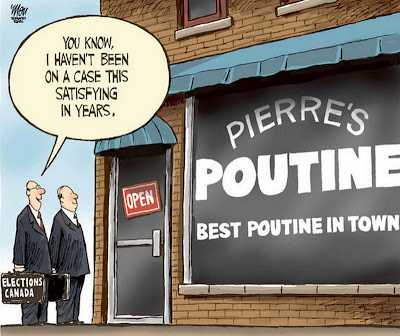 Oh. My. Gravy. I don't know if the Chief Electoral Officer likes poutine. But it's good to know that even if he doesn't, he's got a heap of complaints to munch on.

“Immediately following the 2011 general election, the Commissioner of Canada Elections deployed resources to investigate complaints of fraudulent or improper calls. Since then over 700 Canadians from across the country have informed us of specific circumstances where they believe similar wrongdoing took place.

And unlike the Cons he's ready to talk to a parliamentary committee.

“As I have previously indicated, I intend to submit a report to Parliament in due course. In the meantime, as an agent of Parliament, I would welcome the opportunity to appear before the parliamentary committee responsible for electoral matters to provide information on our administrative and investigative processes.”

Which is sure to give the Harperite thugs a bad case of indigestion. And make the Con klown Dean Del Mastro belch out of both ends. Especially when he reads this.

Because now he can't blame the Liberals. This is clearly a vast Con conspiracy. Just like him and the others can't blame a rogue operative. Because all that parliamentary  committee has to do to uncover the truth, is subpoena Inky Mark.

So he can can make clear what should be obvious; there are no rogue operatives in Stephen Harper's Con mob, because the PMO and the War Room control EVERYTHING.

He says the party had control over the entire, nationwide database. An MP and his staff were at the mercy of headquarters, Mr. Mark says, because they had the power to allocate and revoke database passwords.

“I always have thought independently, even with [election] signage at home,” the former MP said. “I always knew that I had to do my own thing, because ... they can control you 100 per cent, and that's exactly what happened with CIMS.”

And Great Ugly Leader is a control freak out of control. Like his hero mentor Stalin.

And I can only imagine how Stephen Harper must be taking the news... 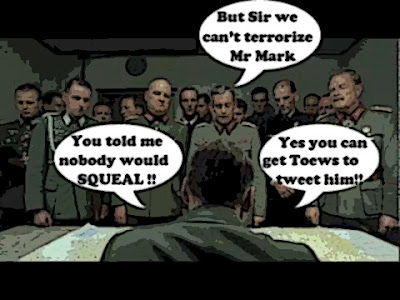 Probably worse than he did when he first heard his gang had been fingered.

He refused, angrily vowing to remain aloof, and deliver a full-on head-banging assault against his House of Commons adversaries.

Which was crazy enough. And makes you wonder whether he's fit to remain in office. So I wouldn't be surprised if tonight, he's rolling on the floor, biting the carpet, and shouting "Inky dinky poo poo #!@#!!"

But who can blame him eh? The cover up is unravelling, there's nothing he can do to control it, and that must be KILLING him.

Mmmm...I LOVE this poutine story. It makes me hungry for more.

Pass me the french fries. Sprinkle some cheese curds on this delicious scandal.

And let the Cons drown in the gravy...

Cartoon: Theo Moudakis/Toronto Star
Posted by Simon at 12:03 AM

The number on Lori Bruce's phone, who is from Fredericton appears to lead back to Astrid from Mission BC who was a big story out here awhile back.

I find it particularly disturbing that these bastards were keeping data on non-supporters. The influx of "voting cards" that would arrive at my home from the con monster Colin Mayes in Okanagan Shuswap asked you to vote on which party leader would handle an issue the best. I repeatedly answered these cards and requested a response. Of course I never got one, but I'm sure I went on their no vote con list.

Harper has slid out of everything, he will not go down easy.

Only a "conservative" could deny it now. The cabal of criminals that play-acts as our government has no respect for Parliament or for the electoral process.

And yet, AND YET, they still command leads in major
polling. I mean, WTF??? How can Canadians be so blindly fucking stupid?! HOW?!

The Northern Foundation is, Reformer Harper's true Party. The skinheads assisted Harper to organize his shady party. This was in 1989.

Very few of the elderly own computers. They lived in far more honest times. The elderly don't realize the media, are propaganda machines for the government. So many, many times, the elderly are targeted. They are very easy to scare. Gordon Campbell and Elections BC, terrorized an elderly lady in her eighties. She was far too afraid to fight back.

Well over half of Canadians, did not want Harper as P.M. The election was cheated, therefore not valid. This is far from the first time, Harper has used dirty tactics.

I don't think they are ~ I think most of these polls are 'fixed' in one way or another ... either outright owned or bought by the cons, or they were targeted to Cons ... or any other of the f'ing ways these slime balls have - and we know they have many!

hi Ross...good post, and excellent detective work from you and Grumpy. I've sent a telegram to Monsieur Poirot, telling him not to come because we don't need him ;)
Seriously though...it is a vast conspiracy,and hopefully more Canadians will start seeing the forest for the trees. Unless of course they are terminally dumb, and in that case we're doomed...

hi bcwaterboy... Because political data banks are not subject to privacy controls, the Cons have turned their monster machine, modeled after the one Karl Rove built, into an instrument of mass control. So they can identify each and every one of us, manipulate us, play wedge politics, and now clearly to suppress the vote. I wish the police could seal off the data bank so the Cons can't purge it, like Richard Nixon did with the Watergate tapes. But I saw Stephen Harper smiling in the House of Commons, like cat that's just eaten a mouse, so I'm not optimistic...

hi Steve...you're right when you say that Harper has managed to avoid getting burned before by any of his government's many scandals. I attribute that to the 24-hour news cycle, the inability to see the forest for the trees, the absurd belief that he is an economist instead of a rabid ideologue, and of course the sheer idiocy of many dumb Canadians.
But remember, this latest scandal comes at a time when the Cons are under attack for Bill C-30, and the crime bill, it all plays nicely together like the Fascist Symphony Orchestra.
And unless those dumb Canadians are dumber than even I imagine, the combination will over time hurt the Cons...

hi thway...yes, and even some conservatives are having second thoughts, especially those troubled by the internet snooping bill. Of course you won't find any of the Blogging Tories questioning Great Leader, because they're the dumbest bunch of sheep the web has ever seen. I read a Dr Roy post the other night, and I had to remember to keep breathing, and reassure myself that the human race isn't doomed, because it was that bad.
But any intelligent conservative must surely recognize that it's a vast conspiracy, and as the Con brand gets slowly degraded, I wouldn't be surprised if more of them start speaking. Of course they have to shout to be heard, because the sound of Baaaaaaahing in the flock is really really loud... ;)

hi Omar...I admit that at first glance the situation is disheartening. The other day the Con pollster Jamie Watt claimed that according to his number only about 35% of Canadians are engaged in the issue. And if they are not concerned about the threat to our democracy it really makes you wonder what would it take to get them worked up? Could words ever do the trick, or would a cattle prod be required? But I'm still optimistic because I believe it takes time for these issues to sink in, and play into other issues, until people start to react. If I'm right the Con brand will slowly be degraded just in time for the next election...if they're not arrested first. If I'm wrong I'll give up and see you in Sweden... ;)

hi meadowlark...the Harperites have always targeted the elderly, playing to their vulnerabilities, scaring them, or just lying all the time.
Hopefully more of the elderly will realize this isn't the Conservative Party they grew up with, and vote to defeat them in the next election...

Simon, I agree with you totally, I'm afraid. Harharper will turn nothing over to anyone until all incriminating evidence has been expunged.

Omar, it completely baffles me.