The Cons: The Horror and the Desperation 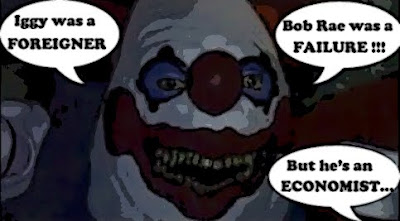 Well I see the politicians may be on a spring break, but the sinister Con War Room, like death, or Great Ugly Leader.

Golly. I have to admit when I first saw that attack ad it struck fear into my heart. I was afraid I might have to plod through the Book of Stephen Harper's Moods and Disorders, to see which one of his multiple personalities was responsible for that one. And it's a big book eh?

It just didn't seem to make sense. Why would the Death Machine go after Bob Rae, the leader of the third party, THREE years from an election?

But then I realized it's only TEN days to the budget.  This other new Con ad, is a mirror image of the other...

The operating word is DEFICIT...

And the central message is Rae had a big deficit and turned Ontario into a welfare province. But he's going to slash the deficit like Jack the Ripper.

Though the announced total savings target is $4 billion a year, CBC reported recently that the government is becoming more aggressive in its targets and the overall target could end up reaching $8 billion.

Even though experts have warned that job killing plan could drive us into the abyss of a new recession. So he needs to make our relatively modest deficit sound like an enormous threat. Because he wants to kill government, and he needs people to think he's an economist eh?

And the problem is more and more Canadians don't believe him.

Respondents who say the country’s on the wrong track are up 15 points since last August. Those who say Canada’s on the right track are down 11 points over the same period. The streams have crossed, which as we learned in Ghostbusters is bad news: wrong-track respondents now outnumber right-track. When the question is about the government’s handling of the economy, instead of the country in general, disapproval is up 15 points since January. The prime minister’s personal unfavorable rating is up seven points.

So his attack on Rae is really just a sign of growing DESPERATION.

“They want to talk economic record? Stephen Harper took a $13-billion surplus and turned it into the biggest deficit in Canadian history,” Mr. Lauzon said in an e-mail, referring to the $56-billion deficit Mr. Harper’s government racked up during the recent economic downturn.

Mr. Harper added $125-billion to the national debt, Mr. Lauzon said, and since he became Prime Minister, 270,000 more Canadians are out of work.

You know a pollster on the Evan Solomon show said yesterday that some dumb Canadians are losing interest in the robocall scandal, because it's too complicated.

But I say hit them in their wallets, and they'll squeal like pigs.

Woohoo !!! Excuse me while I fire up my Great Video Attack Machine of Con Destruction.

It's the economy stoopid.

Rae's days in Ontario were dark days indeed as they nearly killed my parents' small business.

The right-wing critique against Rae is complete bullshit. Typical of their small-minded, hypocritical, stammering efforts.

Rae was faced with a major recession, deliberately caused by the Bank of Canada (and then Alan Greenspan dragged the USA and the rest of the world into his own recession).

On top of this, Rae had to contend with the downloading of service spending obligations of the Chretien-Martin Liberals from 1993-95.

There's no way that sane, honest people could talk about Rae's deficits without also criticizing Harris-Flaherty for their deficits. Look at this chart and see if you can point to the precipitous drop in debt to GDP in Ontario following the supposedly profligate NDP socialists.

hi Way Way Up...I have to admit that historical event happened before I got interested in politics. But from what I've read Rae didn't create that recession, and when you compare his economic record to Harper's during this recession, he didn't do too badly...

hi thwap...I agree this Rae/Ontario nonsense has gone on for too long. And as I told Way Way Up when you compare the depth of the recession, and the amount of money spent to get out of it, Rae loooks a lot better than those big spending Cons do...

Counter attack: "When Flaherty was in charge of the Ontario budget, homelessness skyrocketed by X%.