Is Vic Toews Out of Control?

As you know I have long been concerned about the mental state of the Con zombie Vic Toews. And whether he's fit to remain in office.

First he came crawling out of his crypt, the one with the large bed and the mirrored ceiling, claiming that anyone who didn't support his fascist internet snooping bill was siding with child pornographers.

Then he demanded that they bring him the heads of Adam Carroll, the author of Vikileaks, and the person or persons responsible for Anonymous. Claiming that they had "degraded" him, violated his parliamentary privileges, and he was so hurt he couldn't do his job properly. Boo hoo zombie.

Although they only published material that as sordid as it might be, was on the public record. They were reacting to his grotesque slur for which he has never apologized, as well as his plan to turn our country into a police state. And Toews himself is a notorious internet bully.

Toews slowly began to move from the innocuous to the abusive in his emails. He taunted the opposition, howled when they disagreed with him. When the opposition voted against a Tory crime bill, he accused them of helping child kidnappers...There is no debate with Vic; you are either with him, or you are a sociopathic, perverted deviant.

Which is disturbing enough eh? The stuff of nightmares. Think about it. The old Con zombie who can't punish or jail enough people, hunched over his keyboard, sending out weird angry messages very late at night. But going berserk when he's attacked.

He asked the Speaker to find that his parliamentary privileges were violated by the @Vikileaks campaign and by the Anonymous threats. He had his personal lawyer persuade a Manitoba judge to release a private list of those people who accessed his divorce file. He has asked a parliamentary committee to investigate the @Vikileaks episode and the videos. All this from a man who has demonstrated no limits when it comes to bashing his opponents.

And he's the Minister of PUBLIC SAFETY?

But wait it gets scarier. For now he's definitely gone off the deep end.

Toews was defiant in an appearance before the Commons’ procedure and house affairs committee about what he said was “a new phenomenon for members of Parliament.”

He will not withdraw the bill to increase online police surveillance powers, or resign, as Anonymous demanded, he said. “I will not be intimidated by thugs who hide behind masks and anonymity.”

For is he seriously suggesting that we need the internet snooping bill more than we did before, because somebody printed stuff about where he stuck his gnarly knob? Because of what happened to HIM?

Has he seriously ordered the RCMP to investigate the internet? Even though no apparent crime has been committed. And does he seriously claim he's just a "complainant" when he's The Boss?

Though he is responsible for the RCMP, he said as a complainant, he does not know “the full extent” of the police investigation. He did say that it is “broader than the threats posted on YouTube.”

How broad is this investigation? And did he give his uniformed minions a list of his internet enemies i.e. anyone who has ever criticized him, to assist them with their investigation?

Because if he did we're all in trouble eh? And so is our democracy.

For Toews is an internet creeper, he reads everything that's ever written about him, he never forgets a name, he has a very long list of those he'd like to punish... 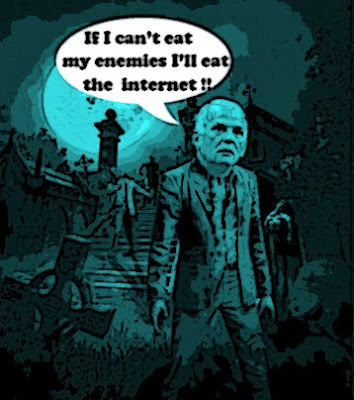 And trust me, now he REALLY wants to read our e-mails.

Yup. Bill C-30 has come back to life, and must have a stake driven through its heart, to make sure it doesn't live to haunt us.

The Con zombie is clearly out of control. And if Harper doesn't fire him, he must be forced to resign. For as long as he stalks his enemies, real or imagined, this country is in real danger.

What is there to say? TwinkleToews wants to take up valuable time whining about what? A video he didn't like?? BooF'ingHoo!! If he's that thin-skinned, he shouldn't be in office!!
How can he expect to be 'respected' when he doesn't respect Canadians? We've been called terrorists, traitors, supporters of child pornographers, and lots more!! He cannot scream 'privilege' when he continually abuses his!!
And as far as vikileaks - He did it, cut off support to his ex-wife and child while preaching 'family values' and 'obligations'... Sorry, he left himself wide open to ridicule and 'threats' - that is, if you can call that video a threat! Besides, whom exactly is he speaking of?? Got a name? or names?? No?? O well, swatting at ghosts then ..... what an obscene and bloody waste of our tax dollars!! This govt. disgusts me to no end and the sooner they are turfed for all their c.r.a.p., the better!

Is he fit for office? Obviously not. His party's majority was obtained through fraud and is therefore illegitimate. Furthermore, their illegitimate majority is the only thing keeping harper from being investigated for war crimes among other things.

When Toews mentioned "thugs who hide behind masks and anonymity" I thought he was referring to the cowardly scum-bag Conservative Party assholes who orchestrated the sleazy, illegal, anti-democratic voter suppression during the 2011 election.

There is no rule of law in this country. Toews is a symptom of that.

You would have to be weird, to be a henchman for Herr Harper. He has far more than one ranting and raving henchmen.

Harper also has the scum of the earth working for him. Gordon Campbell has the dirtiest, most corrupt and foul political record, in the history of this Nation. Harper rewarded henchman Campbell the post of, High Commissioner to England, for doing his dirty work for him.

Harper also had a many times convicted criminal working for him. Criminal Carson and his ex prostitute girlfriend, were guests in Harper's home.

There is no way Harper and his henchmen, are fit to govern this country. Canadians despise fascist dictators, and Herr Harper has stepped, way over the line.

Harper and his choir boy henchmen, are not exactly as Harper portrays themselves to be.

I totally believe, the election fraud and the robo-calls, are Harper and his Conservatives doings. However, Harper appointed Marc Mayrand, as the Chief of Elections Canada. Don't expect Mayrand to oppose Harper. He will lose his job, if he does. Harper also controls, Elections Canada.

I think we should be a tad nicer to Toews. It appears he may have some mental issues & needs medical assistance. They guy looks & sounds like he's off his rocker. What politician goes to the lengths he does. Politics is a "hard game". Either put on your big boy pants or get out.

Politicians of all parties have had things said about them they didn't like, they got over it. Most took the high road, but Toews wants to compare his opponents to child predators. That is so sick.

He can "hunt/investigate" to the ends of the earth for all I care. So what. He can try using the RCMP as his "googy" people, but who really cares. its like they are a joke.

It maybe a cacus thing though, given Raitt's reactions to critizism.

Now of course, given the robo-scandal & all, you'd think the guy would be smart enough to shut up.

Frontline had a documentary about the Rupert Murdoch scandal in England. In the end his undoing was one man & his lawyer who would not back down. It happens & I expect it will happen to Toews & his herper=cons.

When Toews mentioned "thugs who hide behind masks and anonymity" I thought he was referring to the cowardly scum-bag Conservative Party assholes who orchestrated the sleazy, illegal, anti-democratic voter suppression during the 2011 election.

Yes exactly. The way the Cons are trying to equate Vikileaks with their far bigger scandals is simply disgusting. The law is being mocked and the Cons should be ARRESTED...

hi meadowlark...well yes I agree with you, you have to be really weird to be a Harper henchman. Harper is a political thug, but the Cons who followed his orders so faithfully will also be judged by history. And the verdict will be a harsh one....

hi e.a.f....I could never be kind to Toews because I remember what a grotesque homophobe he was. And although, as I mentioned above, I'm too prudish to print the kind of stuff Vikileaks did, if there was ever a Con who deserved it Toews is that thug. He got his apology from Rae and Carroll, so he should just cool his jets. Because you simply can't haul people before kangaroo courts for no good reason, and still call it a democracy. And Vicky's pursuit of Carroll is beginning to look like a flagrant abuse of power. And yet another reason he should resign or be fired...

It's not "perverted deviant", but "deviated prevert".

("Bat" Guano and Vic Toews kind of have the same moustache, isn't it?)

Vic Toews, Canada's Minister of Public Safety has come out opposing anti-bullying legislation, claiming it violates the Charter Rights of religious people to bully gay people. In his view, religious rights are violated if even students create clubs to curb bullying. In his view, Christian students must not even in the gentlest way have their right and duty to beat up gays challenged. It is not as though religious bigots are being forced to join such clubs. There is _no_ religious or constitutional right to beat up gays, any more than there is a religious right to beat up Jews, First Nations people or Francophones. Toews is more than derelict in his duty to ensure the public safety of _all_ Canadians; he is deliberately fostering illegal violence. He must resign.

hi Roedy...it is ironic isn't it that Toews should be the Minister of Public Safety? I prefer to call him the Minister of Public Insecurity, because he sure doesn't make me feel safe. The man is an appalling bigot, and a hopeless hypocrite, who had a child with another woman while still married to his wife. But still would claim that gay marriage would lead to polygamy. But even that pales in comparison to his disgraceful position on bullying. For every politician, no matter to what party they belong, should be interested in protecting children from abuse. And you're right he should have resigned or been fired long ago...