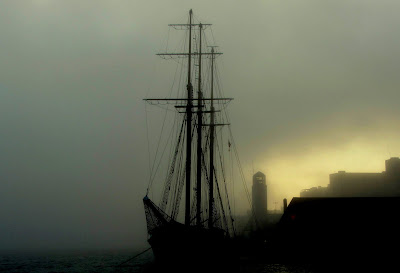 It was so spooky on the waterfront last night, as a heavy mist rolled in, it reminded me of the movie The Fog.

You know, the one where the ghosts of the past stagger ashore, and scare the bejeesus out of everyone.

Former NDP leader Ed Broadbent is standing by his sharp criticism of party leadership front-runner Thomas Mulcair, saying he has a “responsibility” to highlight the shortcomings of the Montreal MP before the race concludes. 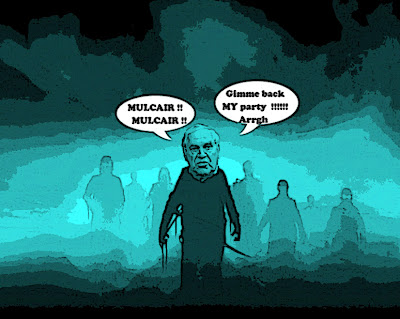 Because old Ed is obviously so worried about the fate of his cabin backroom boy Brian Topp, that he is willing to say ANYTHING.

Which I suppose is his right eh? He's been around so long he's even comparing himself to Tommy Douglas.

But he really shouldn't be allowed to get away with this:

Broadbent revealed the tipping point for his decision to speak out was twofold: Mulcair’s criticism of people at party headquarters, and how he took credit for the NDP’s success in Quebec in last year’s election — in which it increased its seat count to 59 from just one in the province.

Broadbent said that Mulcair was a good candidate but that, in fact, the campaign was developed by officials at party headquarters and a team in Montreal.

“They developed a brilliant campaign, adopted language in Quebec for the campaign that was appropriate for a province with a different language and culture. But Tom had virtually nothing to do with it.”

Because that's absolute bullshit, or merde as we say in Quebec.

If a Broadbent-led anybody-but-Mulcair movement determines the outcome of next week’s vote, owing victory to a threatened establishment won’t do much to bolster the winner’s moral authority.

That will be particularly true in Quebec, where not a single independent observer buys Broadbent’s analysis that Mulcair was the beneficiary of a 50-years-in-the-making stroke of central command genius rather than a major protagonist of the NDP’s surge in the province.

Repeating over and over again that Mulcair is not the prime NDP figure in Quebec and a central piece of its electoral future will not make it true.

By taking a political risk and capturing the Liberal bastion of Outremont,  Mulcair gave the NDP new found legitimacy, and encouraged many to take a similar risk, join the party, and create the orange wave that swept the province.

His fiery rhetoric aimed at Stephen Harper's gang is music to the ears of Quebecers, who hate the Con regime more than any others.

And he remains the NDP's only hope of recapturing the support that it is losing to the Bloc. As I explained here.

But hey, why support the only political leader who can make the bully Harper cry uncle? When you can join with the self-appointed keepers of the ghostly flame, wank yourself silly, and snatch defeat from the jaws of victory.

In an unusally frank conversation with the Star’s editorial board last month, Mulcair said the NDP needs to move beyond “the 1950s boilerplate” language of social democracy. Tellingly, he shared an anecdote about being lectured by an NDP activist that “If we ever form a government it will be conclusive evidence that we sold out.”

Or the Progressive Suicide Club.

You know, ignorance about Quebec is always a bad thing.

But when it comes to politics, it can be absolutely FATAL.

Oh yeah. One more thing. How do you think Great Ugly Leader is reacting to the sight of the keepers of the flame attacking the leader he fears the most? Old old Ed doing his dirty work for him?

Labels: Ed Broadbent, New Democratic Party, quebec, The Divided Left, The Idiocy of it All

I think one reason Ed Broadbent is upset at Thomas Mulcair is that talked about getting rid of the old boiler-language of "ordinary Canadians" and "working families." The first term is a Broadbentism. Implicitly, Mr. Mulcair is repudiating Mr. Broadbent's work.

No matter who becomes the next leader, the NDP needs to change its poltical language in order to attract support from Canadians who have not traditionally voted for the NDP. Traditional NDP issues like health care and the environment may need to be framed within the context of the economy. Traditional Conservative voters understand that the economy is very important. The NDP should be framing socially progressive issues in relationship to the economy and family economics. It does not mean that the party must move to the centre or water down progressive issues. The NDP needs to speak in another political language or dialect to reach more Canadians.

On the issue of Quebec and the rest of Canada, Thomas Mulcair will need to find the right balance on issues related to language that will satisfy both Quebeckers and Canadians living outside Quebec. If Mr. Mulcair seems to favour one group over the other, all the good work that he may do may count for nothing.

I will add that I think Harper's Conservatives will mount a cultural campaign against the NDP and Liberals. The Conservatives will campaign as the "pan-Canadian party." They will try to frame the NDP and Liberals as the parochialists who only care about big labour, "eco-nuts" [my word], Quebec separatists, and foreign lovers (Mulcair's dual citizenship). Never mind that Harper's pan-Canadian party won't include Quebec. His party does not need Quebec to win another majority unless the opposition parties encroach on Conservative territory.

Take a look at the US situation where the infighting is on the right. Do you seriously believe the Republicans fighting during primary season will make the election a cakewalk for Obama? We can hope so, but probably Republicans will try to claim to be the party of fresh ideas, hashed out in a public open process, contrasted with the evil drones of Obama.
Here, things are more complicated, since we will have two parties left of Ghenhis Khan and despite having each gone though a public open process contrasted with the evil drones of Harper, we'll probably still be fighting each other.
Either Lib or NDP has to pull ahead and be the standard bearer against Harper, or we have to find a well to sell working together that the fascists can't counter. The bottom line is still at the riding level, two good candidates can outpoll one mediocre one, but they can't defeat the mediocre one.

Simon, why must this become "you are with Mulcair, or you are a terrorist?" Doesn't that sound a little too familiar? Get over it.

Realise this, one third of the NDP membership lives in BC and has been a member since long before the orange wave of Jack in Quebec. We are all left of Harper and he needs to be defeated. Alienate BC with this corporate candidate and YOU will be the ones that re-elected Harper.

I hate this divisive rhetoric, it makes me want to be sick. Cullen is forging a plan to unite the progressive left and centre to defeat Harper and then engage in electoral reform. He has grassroots support and momentum.

I could get behind Topp or Nash or Dewar or Ashton, but I would never vote for Mulcair. It has nothing to do with Broadbent and everything to do with loyalties. Where are Mulcairs loyalties?

hi Skinny Dipper...I don't know whether Mulcair is repudiating Broadbent's work. I think he's just annoyed, that his candidate Brian Topp is losing momentum like a leaky balloon. As I've mentioned I don't have a problem with Mulcair reaching out to Canadians who haven't voted NDP before,as long as the NDP's basic values are respected. And since it's clear to me he's the one leader who can save all those seats in Quebec, and the leader Stephen Harper fears the most, for me the choice is obvious...

hi Skinny Dipper...I think Mulcair is well placed to reach out beyond Quebec. I think his ability to pound Harper in both languages will resonate with a lot of Canadians who are angry with what the Cons are doing to Canada. And while it's true that Harper doesn't need to win in Quebec, it's in his interest to revive the Bloc to further split the vote and ensure that the NDP, barring a huge surge in English Canada, can't ever form a government. And he's already doing that quite successfully, so whoever leads the NDP will have to fight off that challenge...

hi liberal supporter...One day historians will look back and wonder why the progressive parties ever thought that if they split the vote four ways they could beat a united right. Why their approach was so flawed, and their maths so bad. I have always believed that the Cons will not be decisively driven from power until progressives, and nothing will ever change my mind. However in the meantime I am forced to hope that the NDP and the Liberals win as many seats as possible so at the very least they can form a coalition. Because in the absence of that, when I look at the party standings now, all I see is another disastrous vote split, that could return the Cons to power again. And as you know, doing the same thing over and over again, without changing the result, is the very definition of insanity...

hi Kim...I am certainly not suggesting that if you don't support Mulcair you are a terrorist. I would never stoop that low. And I have a lot of respect for Nathan Cullen, since I have always supported the union of progressive forces. If I thought he could win back the NDP seats that are being lost to the Bloc, and I was voting, I would consider supporting him. But unfortunately I don't think he can, and since like it or not Quebec is now the NDP base, and barring an enormous NDP surge in the rest of Canada, if those seats are lost the NDP will be back where it was before the Orange Wave.
And the Harperites could win the next election.
For me it's not about which candidate I personally prefer, it's about choosing the candidate who can hurt the Cons the most, and I honestly believe that Mulcair is that person. The good news is that unless the NDP and the Liberals surge in the polls Nathan Cullen's ideas will impose themselves, and whoever is leading the NDP will be forced to adopt them...

Hi Kim...one more thing. Needless to say I thought Broadbent's comments were ill advised and divisive. So I'm glad to see Nathan Cullen agrees with me...

The closer we get to closing this leadership race, the more I find myself in Cullen's camp. He has the energy to revitalize the party and appeal to people all across the country. I think you can fight Harper without being angry and his willing to cooperate with other parties to take down the Conservatives is appealing at this point. I just wish he hadn't been so non-inclusive with respect to the Bloc. I think of them as progressive allies when it comes to Parliament.

My feelings exactly. I believe Cullen has more chance of resonating with Quebeckers then Mulcair does appealing to those in the rest of the country.

Go Nathan Cullen! I hope he wins. He's a people person, honest, charismatic and with his heart in the right place. *crosses fingers*

He also promised me he'd continue learning French whether he wins or not. Here.