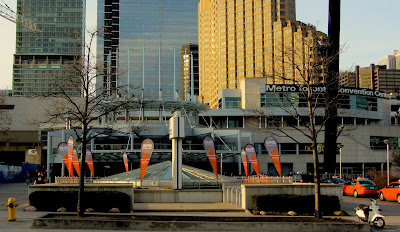 Well this is as close as I got to the site of the NDP Leadership Convention. I briefly thought of crashing the party, but I was afraid I might bump into Ed Broadbent. Call him an old asshole.

And be unceremoniously ejected from the building, for causing a ruckus at an NDP event. Which is about as low as you can go eh? Sort of like farting in a church.

But unfortunately it was too late, because by the time Uncle Ed was finished blowing his fog horn, or acting like old man Potter in It's a Wonderful Life... 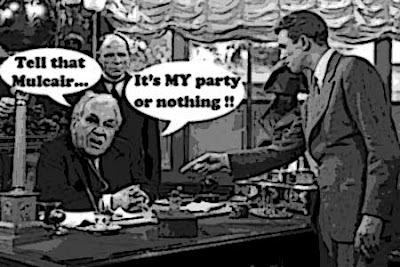 The Globe and Mail was also blowing the silly trumpet.

Quebec MP Thomas Mulcair walked slowly through the crowd to the sound of drummers as he entered the floor of Toronto convention centre, losing precious time to convince his party to anoint him as successor to Jack Layton.

The drawn-out entry forced Mr. Mulcair to zip through his speech within the allowed time frame, eating partially into his status as the front-runner in the race.

When in fact I thought the drums were great, Mulcair still got his message out. And I really liked the evil grin on his face when he said he was looking forward to meeting Harper in the ring House of Commons.

Because you know he means it, and it can't come soon enough.

The monster is unleashed. And Mulcair is the only leader who can win Quebec, expand the party's appeal in the rest of Canada, and leave the crazy ideologue battered and bruised.

But of course first he has to win the leadership, and that has me worried. Because there are still too many in the NDP who think that making the party more popular is a threat rather than an opportunity.

And who think that their candidate can beat Harper because you know, they got FAITH.

Like the ones who think that Justin Trudeau can beat a guy who learned martial arts in the military... 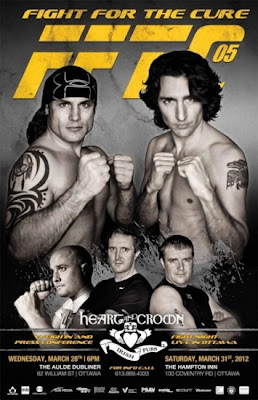 When sadly poor Justin is probably going to need an ambulance, and a good plastic surgeon.

But whatever...what most impresses me about the NDP leadership convention is the level of organization. And how the NDP looks more and more like a government in waiting.

Which made this sad remembrance easier to bear.

The widow of Jack Layton implored New Democrats on Friday to continue to grow his work and reap the harvest as the NDP paid tribute to the man who led it to the gates of Canada's electoral promised land.

With tens of thousands of card-carrying party members poised to choose Layton's successor on Saturday, Olivia Chow told the leadership convention "we have come through a winter of challenge and change together and now it is spring."

Because it reminded me of this story.

Jack's ashes will also be scattered on the Toronto Islands, where Layton married his wife MP Olivia Chow in 1988.

A memorial tree will also be planted at the site on the islands.

And now I think I can safely say: Jack, you know that little tree? The one I said I would guard with my life? 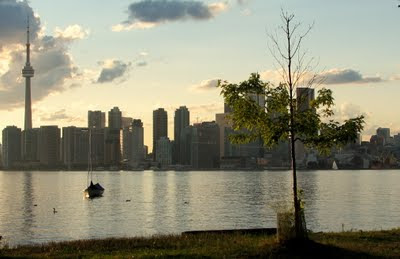 Well it's growing bigger and bigger and it won't be long before its branches touch the sky.

And the future looks orange...
Posted by Simon at 2:53 AM

Good post...But I do think that there are many good NDP leaders at the convention, unfortunately 6 have to lose..

If the specter of the Conservatives makes the NDP turn itself into Liberal Party 2, then karl rove and stephen harper will have done their job.

Hopefully what we're seeing instead is "the strange death of Liberal Canada."

I wish I shared your optimism for Mulcair, Simon, but I don't. I'm not going to waste my breath slagging him as that accomplishes nothing, but I do have some very genuine concerns. Like you, I will be delighted if Mulcair goes after Harper and his thugs with an unbridled ferocity, determination, dedication to the truth as well as wit and clarity. The Harper Reich needs the crap scared out of them and I hope Mulcair will bring that on in spades. But I am worried about his desire to move the party rightwards to the "center" which I think is not only unnecessary but a bad idea. It's the neoliberal policies and mindset of the LPC that led to the disconnect between them and the rest of the Canadian populace, and that same thinking that keeps them from accepting, let alone fully understanding, why they lost so badly and why they are still so rudderless. The NDP CAN take apart the Harper Reich with blow after blow -- especially if Mulcair and his MP's sink their teeth into the Election Scandal and don't let go -- but they can also do this by presenting a strong, socially and politically progressive agenda without surrendering to neoliberalism, which will not help, by and large, the Canadian public.

I'm also concerned that if he's seen as too much of a pit bull on a wide range of issues in the House that the public will regard him as just another loudmouth who only makes Parliament that much more dysfunctional. I'm also concerned with his more hawkish stance vis a vis Israel (Would he support an Israeli attack on Iran without question? Even a possible nuclear one?) or involving Canada in other aggressive military adventures or spend money on weapons that would be better spent on restoring the social safety net, healthcare, or education.

Yes, sadly, Jack is gone, and the Party will go on, and change, without him. And yes, there is a fight, an all out war, to be joined for the survival of our country, but we can do one without doing harm to the core values of democratic socialism.

I too fall in line with thwap and Thinking Man Neil. I find this outcome extremely depressing and have to wonder if the goal posts have been permanently moved to the far right where the centre now belongs to Brian Mulroney's policy positions if not further right.

It's a sad state of affair when I am brought to the point of wishing for the Chretien years.

hi Grant...yes there were many good NDP leaders at the convention, and yes unfortunately six had to lose. But for the NDP it's a winning situation because they'll all make very fine cabinet ministers in a Mulcair majority government...

hi Thwap...the NDP doesn't need to turn itself into Liberal Party 2. Mulcair is serious when he said you can pull the centre towards you. But yes in a polarized country I do believe we will see the death of Liberal Canada. The small-l liberal values will endure, but it will be squeezed from the right by the Cons, and from the left by the NDP, and will look like the meat in a sandwich. Which makes you happy and me hungry... ;)

hi Neil...I understand where you are coming from, but I think you are too pessimistic. Yes, Mulcair may move the goal posts a bit in the vast centre in which most decent Canadians live. But they won't be out of the zone of comfort, and if it helps us evict the Harper Cons that's all I care about. Because I see this as a two-stage battle.
First we battle, destabilize and try to limit the damage to Canada these Cons are doing and eventually defeat them.
Then we argue among ourselves how best to achieve our goals of social and economic justice.
And finally, with a progressive government in place not a fascist one, we can discuss what are we going to do when capitalism collapses, and the shape of what will replace it.
But first we must do what we must do to defeat the Harper Cons, and in that regard, at this time in Canadian history, I believe that Mulcair, like him or not, is our best hope...

hi Beijing...well the Chretien years weren't too bad. But that was before the Harper Cons came to power. And nothing will be the same again. I don't see a problem with the NDP broadening its appeal as long as its tradition and policies are respected. I believe in the idealism and strength of its members so I'm not afraid that Mulcair will take them anywhere they don't want to go.
But we'll never be able to change the world unless we can take power, so if Mulcair can help us do that, I'm all for it...