Is Stephen Harper Going Off the Deep End? 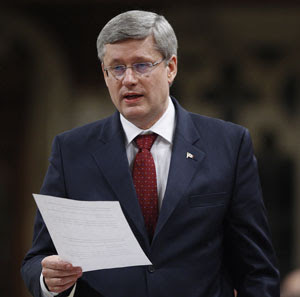 In all my years of studying Stephen Harper, like a bug, I have never seen him look and act  so crazy. Blaming the RoboCon scandal on the Liberals.

Or hunched over his desk writing away, pretending to ignore a debate about whether he stole an election. As only he would.

But it was the look in his eyes that froze the blood in my veins. Or made me feel like Vic Toews was looking over my shoulder.

Because it's the look of a frightened and desperate man. A man who because he is what he is, can't fully understand what's happening. Or why he's looking like a liar or a dangerous idiot.

But he can read the polls.  He knows this is trouble. And he is willing to say or do ANYTHING to stay in power.

In other words, he's looking and acting like the first Harper in Canada probably did, when they came to drive him from office.

Because sooner or later it had to happen eh?

But of course the really scary part is that this Harper is even more deranged and vindictive than the first one. And this one is determined to let NOTHING stop him from changing Canada beyond recognition.

So he's perfectly capable of doing something as insane as this.

Far from tempering spending cuts to ease the sting of recent political setbacks, the Conservative government intends to double down on fiscal austerity in the March 29 budget, cutting departmental spending across the board by closer to 10% than 5% and slashing the total operating budget by close to $8-billion, including a cut of at least 10% to the CBC.

Killing government and social services, and washing down the CBC with a bottle of Chianti, just because he needs to change the channel.

Whatever else a rightward fiscal turn may achieve, it is certain to initiate a new round of debate that is not about robocalls, which one senses is also part of the political objective. A debate about the economy is one in which the Conservatives will be on their home turf, where polls have consistently shown they are most trusted by Canadians.

Even though that would almost certainly plunge Canada into a brutal recession.

Yup. Let's face it eh? We're in the hands of a deranged leader and his insane Con klown posse. Canadians really should have heeded this warning from Tom "Strangelove" Flanagan.

A Globe piece by Mr. Flanagan before the 2011 election was actually titled “An election is war by other means,” while earlier he had compared the 2008 campaign to ancient wars in which Rome (the Conservatives) defeated Carthage (the Liberals) and “razed the city to the ground and sowed salt in the fields so nothing would grow there again.”

It was always going to be a nightmare... 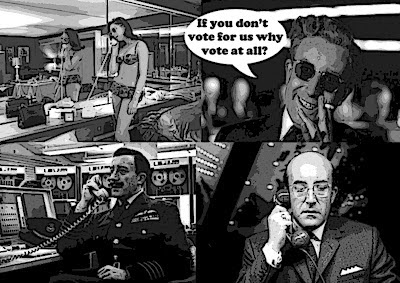 And unless we can force a public inquiry.

Or have him and his Cons arrested for massive electoral fraud.

It's going to get a lot scarier.

And it's probably going to end badly...

I too have been watching the sleazy (couldn't help this word slip it just slithered out of my mouth ;) rise to power of The (Far) Right Honor-less Prime minister Slicko Steven Harper, hmphhh. This man unfortunately is not a mental moron but he is a danger to Canada. It is said that he has been anointed by the larger powers that be, in the greater Geo-political world sphere of NWO types, to be the man that dismantles democracy in Canada, which in retrospect is obvious; we can not let him get away with this.

I have seen the change in him he is not the political idealist he may once have been. He sold his soul to the highest bidder and does not work for Canadians anymore or unless you are with him and if your not its easy; your either a terrorist, an Eco terrorist, an anti big business terrorist, an anti development terrorist, an anti G8 (NWO) terrorist or an anti free trade (which benefits only Multi- and Transnational Corporations and the extremely rich) terrorist and if that does not work you are simply a child pornographer, because you have a computer that is internet connected.

Basically if I may paraphrase here what Slicko and Tom “Assassinate Julian” Flanagan had to say about a coalition government. Because Canada is such a vast and diverse country the only fair way to govern it is with a coalition of all the separate and diverse regions of Canada, preferable five parties, (basically North, Far West, West Center, East and Far East), represented fairly. Now get this they also emphatically stated that our form of government meaning a sitting one party majority government in Canada was nothing more than an elected dictatorship they called “benign” here is the title of the paper and opening salvo

So not only does Harper know he has unfettered power, he plans to make full use of it and have us fall in line into the ‘bigger picture’ of one world government order. Hence the Security Perimeter Agreement with the US behind closed doors, this one is truly scary and the Euro free trade pact. The Security Perimeter Agreement gives the US ultimate say as to whether or not Canadians can enter or exit our own country and not just to the US and back but to anywhere in the world, after all we might be terrorists, right? But also who can and cannot enter Canada, do you feel sovereignty slipping away yet, for the good of the 'bigger picture'? Read what Ralph Nader warned Canadians about during the 2011 election here regarding the Security Perimeter Agreement: (see part 2)

And if any of you doubt that Robo-call was not put into play by Slicko's "operation reelection: majority at any cost", read this: obviously a test run in the 2008 election to see if it would work and if anyone would notice:

It did work and few noticed, are you getting the “big picture” yet? Why the new jails when crime is statistically declining?

The new jails are for people like us, not criminals, but lawful citizens that disagree with Harper’s criminal cabal that is attempting to steal Canada and put it in the lap of foreign Transnational Corporations and other alien filthy rich foreigners.

I don’t know about the rest of you but I’m pissed and righteously so. The 24th of May 2012 (“The holiday is colloquially known as May Two-Four in parts of Canada;”) long weekend falls on the 19 to the 21 of May this year. This notice should give all Canadians time to march on Ottawa “two-four” abreast and stay on Parliament Hill until Harper and his crooked band of cronies’ leaves and is locked up for good. You Egyptians have set the bar high, you showed us how to get rid of a crooked sleazy corrupt Dictatorship and now we will show you how to get rid of a crooked sleazy corrupt Benign Dictatorship! I will see you there!

Canada before it is to late set aside your differences that leeches like Harper prey upon and get him out because he criminally deceived his way into office; therefore he is now officially a “criminal terrorist” committing conspiracy to subvert the Canadian Government and its sovereignty from within and the good news is its open season on terrorists because George Bush declared it so!

I AM a Righteously Pissed CANADIAN

You are not alone

Your problem, Simon, is your inability to see Stephen Harper as a modern, Congressional Republican. He isn't speaking to you or to other members of Parliament. He's speaking to his base who will ingest whatever he feeds them even if wildly implausible.

Oh, and by the way, global warming is a socialist plot.

This is how it will end. Isn't the resemblance uncanny? Will you ever be able to look at his picture and not see the little glowing "1" around his neck?

He’s building really big jails,
And soon it’ll be filled with wails,
The shrieks of dying democracy,
Soon we’ll be an Autocracy,
Harper land is here,
The voting fraud makes it clear,
Canada is gone forever,
Unless we all shout “NEVER”!

The F-35’s he’ll use on us,
It will be like we’ve been hit by a bus,
That is if we give a chance,
So now we must kick him in the pants,
It’s time to say goodbye,
We know he gave it a try,
But, Harper you’re beginning to smell,
It’s time to say farewell.

Harper you’ve gone way to far,
You think our heads are empty like a jar,
But we’ve caught you red-handed,
And now it looks like you’ve landed,
In a terrible mess,
Now c’mon just fess,
Up to the fact,
That you orchestrated this act!

And because of that,
You will never get fat,
At the hogs trough political,
Because we aim to cut your umbilical,
So you’ll never be able,
To sit at the con party table,
No sir not ever again,
You won’t even be allowed to campaign!

We’ll march two-four abreast,
We’ll put Harper to the test,
We’ll call it the Canadian spring,
We’ll have a real good fling,
We’ll march on Parliament Hill,
We’ll get rid of that schill,
Who calls himself the prime minister,
Since really he’s evil and sinister.


Know anyone that can put this to music?

Got a MASSIVE chuckle from that.