An Idiot's Guide to the RoboCon Scandal 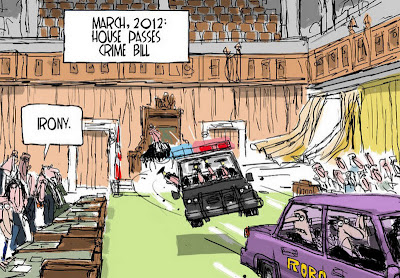 Well, I guess this Gable cartoon kind of says it all. I mean what more can you say eh?

That's what the Cons have done to our Parliament.

But since this is after all a four-ring fascist circus, it's a quiet day, and I'm feeling a bit idiot, I thought I'd bring you some of the other lowlights.

(1) Michael Sona says he's shocked, shocked I tell you, that members of his own gang could finger him as a suspect.

Anonymous Conservatives have repeatedly fingered Michael Sona, singling out him alone among a group of workers on the campaign of Guelph candidate Marty Burke, but a source says Sona had no reason to believe Elections Canada was interested in him until he was named by unidentified senior Tories in a report on Sun News Network the day the story broke.

But still won't explain why if he was being smeared didn't he rush to defend himself? Or use the I'm too dumb to do that defence.

Instead of resigning in a hurry, going to ground, and refusing to talk to the media.

With a criminal record.

The prank video appears to have been produced by a Florida Gators fan in Orlando, who came to public notice in 2010 for putting a video online that threatened to commit physical violence to fans of the Alabama Crimson Tide, a rival football team. Alabama football fans in fan forums identified the man as Brett Warren, a 31-year-old Orlando man who is on probation for burglary and three counts of theft of items worth less than $3,000.

Hey those petty crooks are no dummies eh? They know other Cons when they see them.

(3) Ezra Levant, realizing that the RoboCon scandal is drowning out Big Oil's message, and threatening to send his Ethical Oil book into the Deep Discount section of a Dollar Store, has declared it a scandalette. 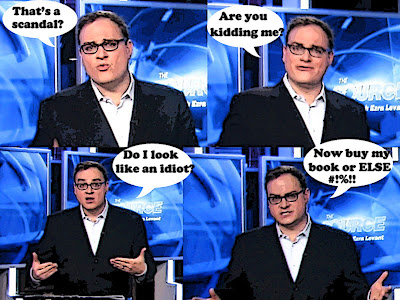 But luckily for our democracy almost nobody watches him, unless he's wearing a fancy dress costume. So who cares eh?

(4) Dean Del Mastro has won himself an honorable mention in the Guinness Book of Political Buffoons, for The Greatest Number of Idiot Statements in the Shortest Amount of Time.

The Conservative MP leading his party's defence against charges of voter suppression sent out two robocalls of his own on election day that left some voters in his Ontario riding confused...The messages urging people to go vote were from someone identifying himself only as "Jeff."

Which no doubt left voters wondering if he's Jeff who's Mutt? Or are they the same person?

Del Mastro previously attempted to rebuff opposition attacks over robocalls by alleging the Liberals had used a voice-broadcasting company located in the United States and claiming his party didn't use American firms.

The defence backfired when it was revealed that Del Mastro had confused a U.S. firm with the same name with the unrelated Ontario company the Liberals used. And Del Mastro's campaign, it turned out, was using an Ohio-based company to arrange telephone town halls.

But on the other hand was also enough to earn Del Mastro the right to wear a Con Klown (second class) hat...

Which I suppose is a happy development. For somebody like him.

But of course leaves the rest of us pondering the same old questions.

Do we laugh or do we cry? How do we defeat those ghastly Cons?

And when can we arrest them?
Posted by Simon at 5:22 PM

This should be a real good start Simon! Please try to pass this on to any and everyone to sign, and share as far and wide as they can!

Doesn't matter if Libs are your party or not - let's just get this despot out!!

I have a couple of others too ...... none of this can hurt! and if possible, get people to print them out, get them signed, and put in the mail (postage free) to E May etc......

If you're in one of the 77 ridings that were robocalled illegally, talk to an org like Amnesty International, and see if they know a lawyer that will help you file with a superior court to trigger a byelection. It may be the last week to make this action a slam dunk.

Another possibility is getting help from the Canadian Civil Liberties Association:

Meanwhile, thanks for keeping this criminal scandal on the front burner Simon.

I think Quebec is telling Harper to go to hell, over this asinine crime bill. McGuinty is fighting with Alberta, over the tar sands money for Ontario. McGuinty is offering no apology either. BC is going to fight the Enbridge pipeline and the filthy oil tankers coming into BC. Over 80% of the BC people are supporting the F.N. to stop those atrocities on their lands, rivers and the sea.

Harper also has henchmen stashed all over the place. Boessenkool is a Conservative, working for the BC Liberals? Gordon Campbell the criminal Liberal, worked for Harper and still does?

Do we now have interchangeable parties these days?

Harper is a Reformer of his true party, the Northern Foundation Party from 1989. they said, the skinheads assisted Harper to organize his shady party. We already have a Conservative party in BC. It's strange henchman Boessenkool is working for the supposed BC Liberals.

Oh well, to be safe, I won't ever vote Liberal nor Conservative. I certainly don't want to be in Harper's Reform party.

hi cheena...thanks for the links. I'm always happy to pass on stuff from any progressive group or party working to drive the Cons from power. I'm not a member of any party so I can work for the good of all of them. And hopefully help get them to work together to topple that ghastly despot...

hi Saskboy... yes that's good advice, and BTW I should say that I think you have been doing a great job blogging on this issue.
I read today that some people in my riding did receive calls, so hopefully they'll help the cause. I must say I'm glad I didn't receive one,for I probably would have exploded. but somehow the Cons never call my number. I used to think that was a good thing, but now I'm not so sure...

hi Beijing...It's great to see how progressive bloggers have been unearthing the truth, and helping and encouraging each other. And I've been most impressed by your excellent effort. As for me, I'm afraid I haven't dug up anything, but I am doing my best to put the parts together, and keep the story alive. I must confess I sometimes wish I could blog about other things, but then I slap myself on the back of the head, and say how could I?

hi anonymous...I remember the first time I visited beautiful British Columbia, and it was explained to me that the Liberals were actually the Conservatives. The look on my face must have been precious, and I don't think I've ever recovered. ;)
But seriously...the important thing is for progressives to join together, and defeat those hideous Cons. It's my most precious political dream and I'm sure it will come true some day...