The Failed Assault on Thomas Mulcair 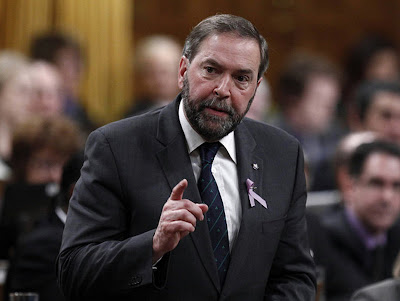 Well I see that even before Thomas Mulcair rose in the Commons today, the Cons sent out one of their attack chihuahas to try to "define him." Or in their mob lingo, bite his balls knees ankles.

“This hug-a-thug, soft-on-crime leader will return Canada to policies favoring the rights of criminals over those of victims,” said Mr. Watson who labelled Mr. Mulcair an “opportunist” with a “divisive personality” and “ruthless ambition.”

But since the designated chihuahua was the Con wingnut Jeff Watson, and he probably said worse things about Nick Kouvalis.

Justice Lloyd Dean acknowledged testimony by two campaign workers who told the court they heard Nick Kouvalis say, "If I could ... kill Jeff Watson with my bare hands and get away with it, I would."

Who cares eh? That's the kind of people they are.

Just like who cares what the buffoon Dean Del Mastro had to say when he told Evan Solomon that the Cons didn't have to launch attack ads against Mulcair because Ed Broadbent had already done that for them?

Because as I told you the other day, he's just been promoted to Con Klown (second class) ...

And he's so dumb he'll say ANYTHING.

One prominent NDPer I spoke to responded to my shock that he was supporting Mulcair with a sort of football game enthusiasm. "I think he can take on the bastard [Harper]."

Facing a ruthless tough guy? Get your own ruthless tough guy. And possibly create a monster you can't control. It is as if policy, philosophy, and vision for the country have simply been devalued to the point where they are an afterthought or some vaguely interesting historical relic.

Because let's face it eh? If Murray doesn't understand that "football game enthusiasm" to bring down the Harper Regime, or how millions of Canadians feel about the "bastard Harper." He should pass the bong, and the Sacred Flame to light up the BC Bud. Because after reading that defeatist drivel, I feel I need some too.

As for me, I thought Mulcair got off to an excellent start. So did Chantal Hebert.

It is too early to predict that Thomas Mulcair will fit that bill in three years but on this — the very first week of his tenure as NDP leader — he is starting off looking like the strongest challenger to emerge from the opposition ranks in half-a-dozen years.

And Lawrence Martin thinks he's the right man for the job.

Mulcair’s ascension, as it should, has all parties worried. He is capable of out-debating Harper, he is capable of blocking a resurgence of the Bloc Quebecois and for the Liberals, he could spell despair.

So if the Cons, or The Keepers of the Sacred Flame, think they can intimidate or undermine a guy like Mulcair. I suggest they give themselves a reality check, or beat the drum tambourine slowly.

Or just watch this video...

Can you believe it eh? A politician who actually uses the word Dutch Disease.

The made in Alberta economic illness that has killed 500,000 manufacturing jobs in this country. And if used against the Cons could wipe them off the map in Quebec, Ontario, and British Columbia, where most of those jobs were lost.

Does that look like a wimp who will be easily intimidated? Or a a right-wing monster out of control? Or a serious opposition leader who could one day lead the NDP and other progressives to power?

Hey Cons, shove it where the sun don't shine, and try to stay out of prison eh? Hey Murray, gimme another toke.

The only downside I see with Mr. Mulcair is that his grammar and vocabulary might be just a bit too sophisticated for most of the Conservative base.

Mulcair will be 100% getting my vote in the next election.

There have been records and documents that show, all the robo-calls and the election fraud, lead right straight to Harper and his Conservatives.

Also, Harper appointed Marc Mayrand as Chief of Elections Canada. The sixthestate web site says, don't count on Elections Canada, to dispute Harper on the election fraud. Mayrand would for sure lose his job, if he did dispute Harper. All Fascists and Dictators, use identical dirty tactics. Harper and Gordon Campbell wrote the book, on that subject.

The Blog Borg Collective web site, shows records and documents, that lead the robo-calls, right straight to, Harper and the Conservatives. Harper and his Conservatives are guilty, of the election fraud, just as we knew they were.

"See Spot Run" is too sophisticated for most Cons...

Watson calling Mulcair an opportunist as rich. They are ALL opportunists in my book.

hi sassy...thanks for that. That'll teach that con skunk Brian Lilley.
My only fear is that Mulcair's advisers are clearly telling him to try to be a nice guy. And I say let him be himself.
But actually here's a funny story. You know who has the worse temper of any progressive politician? Stephane Dion. Seb has a friend who knew him when he was a lecturer, and says he never saw a guy get so angry...

hi anonymous...well he doesn't need the Con base, he needs the Liberal base to win big. I'd say that was impossible, but then I never thought that an NDP candidate could possibly take the French bourgeois riding of Outremont which was a Liberal bastion if ever there was one. So now I'm inclined to give him the benefit of the doubt...

hi Bars...good fellow. You know I'd vote for Elizabeth May or the Rhinocerus party if I thought they could beat Harper. But I honestly believe, at this point anyway, that Mulcair is the only progressive leader who can do that...

hi anonymous...well I'm prepared to give Mayrand a chance to see whether he can deliver. And he has some good investigators working for him. So I'm still hopeful. Also, if the Cons try to interfere with his investigation, I don't thin Canadians would stand for it, and it would be another nail in his coffin...

hi Way way Up...I thought Mulcair handled the question about whether he is an opportunist rather well. Pointing out that choosing to run for the NDP in a province with no NDP MPs, no provincial organization, and in the Liberal bastion of Outremont, might make him look like a dangerous risk taker, but NOT an opportunist...

I was a Nathan Cullen supporter and endured the whole 12 hrs online waiting over an hr on voting rounds to get my vote in for him
I chose Nathan because I wanted to be out of that old boys club loop.Nathan is a breath of fresh air.
Last round tho, went to my choice #2, Tom Mulcair.
Topp was always at the bottom of my list.
By Sunday afternoon, I knew we had made the right choice.
I felt proud as punch to have Mssr Mulcair as my leader,
So far so good.
He IS formidable.