Vikileaks and the Hypocrisy of the Cons 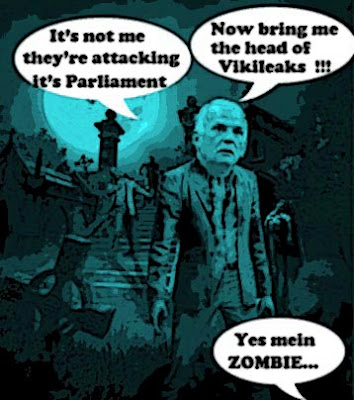 I have to admit that I didn't think the low-budget Con horror/porn movie  Vic Toews and the Zombie Internet Eaters could sink further into the abyss of fascist depravity.

While demanding that the rebel Canadian behind the Vikileaks site be mercilessly probed.

Public Safety Minister Vic Toews is calling for an investigation into the source of a Twitter account that is being used to release details of his divorce.

Even though the site was just publishing material that was in the public domain. So it's freedom of speech. And it did a brilliant job of illustrating the dangers of an internet snooping bill that would turn us into a police state.

One detail that hasn't really seen the light (and it may not be an accident) is the hidden gag order. Not only will the police, national security folks and the competition cops be able to get customer names, addresses, IP addresses and e-mail addresses without a warrant, there's a gag order that means you'll likely never find out you've been the subject of such an inquiry even if you ask your ISP.

And by going after Vikileaks like a hyena old goat in heat, Toews is once again showing us why he should NEVER have any power over the internet, and should be fired immediately.

Oh yeah, I forgot. John Baird also had a starring role in today's episode of Vic Toews and the Zombie Internet Eaters. And it was suitably grotesque.

"Today we learned, Mr. Speaker, that the official NDP opposition have been caught in a nasty, dirty internet trick," Baird said in question period."I call on the NDP to stand up, to take responsibility for these dirty tricks, to apologize, Mr. Speaker, and to identify which one over there is responsible."

Coming from a man known as The Screamer who has debased our parliament more than most with his aggressive hyper partisanship.

And coming from the dirty trick Cons who have smeared more decent people, in the shortest amount of time, than any other party.

Oh boy. Their foulness knows no limit. Their hypocrisy burns.

The good news is that the Con zombie has managed the almost impossible task of uniting Canadians of every political stripe.

Most Canadians seem to consider the Vikileaks author to be a hero rather than a scoundrel.

And the message to Toews, and his fellow zombies seems to be this one:

Take that fascist internet bill back to your crypt, and bury it where the sun never shines. After probing yourself mercilessly.

And of course, now more than ever. 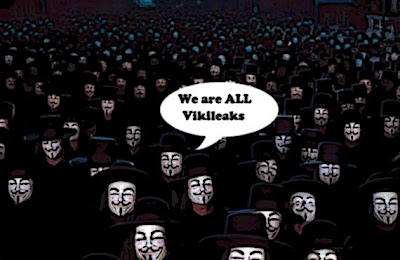 Couldn't think of a better message myself eh?

Have a great weekend everybody...
Posted by Simon at 8:42 PM

Wasn't someone supposed to look into the "leak" from Toronto police that smeared Jack Layton during the last election?

The massage smear was clearly illegal, coming from a police informant. It may have been motivated by some improper loyalty to the former chief, Julian Fantino.

Revelation of Toew's disgusting behaviour is simply the broadcast of public information.

Keep on Keepin' on. I'll be sharing this!

Toews, Baird, harper, ... all complete scum who have lowered themselves beyond all redemption.

I'm glad that homophobic hypocrite has been hurt by this.

hi anonymous... my view on this is that publicizing details of a divorce settlement is not something I would do. But there is nothing illegal about it. The Cons have done worse. And if it helped illustrate the dangers of giving others access to our private lives, and kill that foul bill, it will be more than worth it...

hi Kim...Keep on Keepin' on? Yup I think I can manage that. I admit I'm lazy eh? But after five years of criticizing the Harper regime, it's as easy as falling out of bed... ;)

hi thwap... I'm surprised your list is so short. Let's not forget Kenney, Van Loan, and Clement and so many other Cons, for they too deserve such recognition. ;) I personally have memorized all their mug shots, so I can testify against them at the trials that will surely follow the collapse of the Con regime...