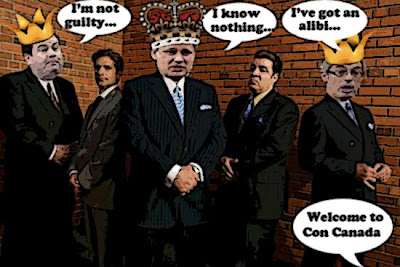 But here are the facts as I see them:

(1) Jason Kenney, a grotesque member of the sinister Harper gang commands civil servants to organize an immigrant show for his friends at Fox News North.

Documents released under Access to Information legislation show that just a few weeks before Canada's Citizenship Week last October, Kenney's staff directed departmental officials to add a last-minute citizenship ceremony at the network to their list of scheduled events.

And was set up for the sole purpose of destroying the CBC... 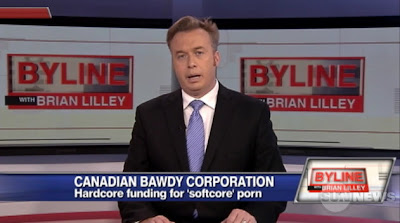 (2) Civil servants suggest that Fox News North could attend one of the many real citizenship ceremonies in the Toronto area. But Fox News North is too cheap to do that, so one of their producers says hey don't sweat it, it's just a minstrel show.

"Let's do it. We can fake the Oath," reads an email from a @sunmedia.ca email address, the name blacked out of the document.

(3) A senior civil servant  suggests that just reciting the Oath might shortchange the new Canadians.

"We have to keep in mind that the ceremony should first and foremost be a special (sic) for the new citizen, most of whom will want family and friends (sic) attend this very special day in their lives," the bureaucrat wrote.

But nobody cares about that eh? And Jason Kenney's office says the show must go on.

(4) When terrified civil servants can't come up with real immigrants they dress up, wave little Canadian flags, and pretend to be the real thing.

(5) The Con monkeys at Fox News North claim they don't know NOTHING. And blame  the CBC... 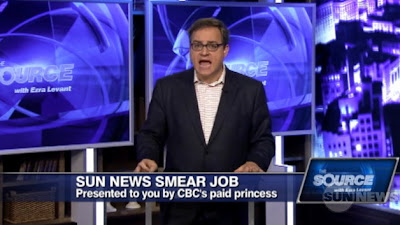 Calling Jennifer Ditchburn the "CBC's paid princess." Because she once worked for them, as did  their own crass media harlot Krista Erickson.

(6) Jason Kenney, who set up the event in the first place, blames a civil servant.

Instead of blaming himself for forcing civil servants to do what they should not be doing, accepting full responsibility for his department, and resigning immediately.

(7) David Akin, who used to be a decent journalist, bends over backwards to exonerate his Fox News North gang, while never properly explaining the what and the why of a "fake oath."

And in the words of one of his commenters, missing the forest for the trees:

Some people that work in a government office are getting flak for doing what they could to respond to a request that they knew right from the start was a bad idea. They shouldn’t be holding the bag, while your network tries to pretend they had no part of this fiasco.

Oh yeah, one more thing, on a different subject.

A Conservative senator says he's been inundated with expressions of support for his unusual idea of helping murder convicts commit suicide.

So what's the big picture?

What a grotesque country we have become.

Jason Kenney is a liar and a coward. Fox News North is a dirty thing.

It's a sad day today here in London, CAT officially closed the plant. Hundreds out of work in a city already in deep suffering, where are the feds now??

Unbelievable. All this ugliness in just one week.

Add to the list, the school yard snickering from the Transport Minister and his CON buddies when Olivia Chow, Randall Garrison and Justin Trudeau raised the blatant discrimination against transgendered Canadians found in the government's airport screening regulations.

Grotesque buffoons are us.

hi Rev Effect...yes it is a sad day, and I can honestly say I haven't been so angry for a long long time. It being such a small world I happen to know the brother of someone who worked at the Ford plant in St Thomas. So I can only imagine how devastating this latest blow is going to be to the economy of the whole region. It's an absolute crime, and I can't understand how any Canadian government would allow a foreign company to treat Canadians so shabbily.
My only consolation is that the workers are apparently going to keep picketing Electro-Motive, and it seems like a great place for the Occupy movement to pitch a tent this summer.
We must not allow Canadians to forget what happened there, because it's such a good example of the criminal incompetence of the Cons, and the corruption of the entire system. How does that old saying go? First I'll lie down and mourn a while, then I'll get up put my fist through a wall, and then turn tragedy into triumph... ;)

hi Beijing...yes you're right it has been a tsunami of bad news or raw sewage. I hadn't heard about the Cons mocking transgendered people, but since they are such crass hogs it doesn't surprise me.
Just when you think the Cons can't sink any lower they always do. As always I remain hopeful that all this fooulness will finally wake Canadian up. We must cling to hope for it's all we have left, and the next three and a half years are going to be very, very, grim...

hi Frank...I'm afraid you're right. Progressives never should have let the Cons win a majority, and we are going to pay for that mistake over and over again. Whatever we do we cannot repeat that mistake, for I truly believe that another four years of this insane klown posse government would really be the end of Canada as we know it. And I for one promise to work my little butt off to try to make sure it doesn't...