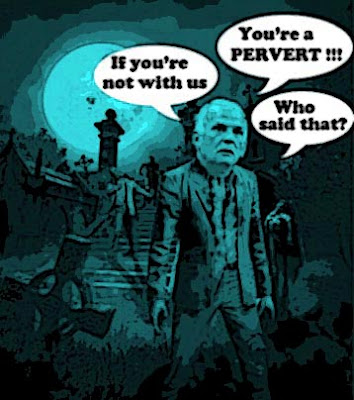 Uh oh. Call the Ministry of Truth. It seems that the Con Zombie Vic Toews is trying to rewrite history.

After failing to parse himself properly...

My diagnosis? If he's forgetting himself it's senile dementia.

"If the Party could thrust its hand into the past and say this or that even, it never happened-that, surely, was more terrifying than mere torture and death."

And one way or the other, in the interest of public safety.

He should resign IMMEDIATELY...
Posted by Simon at 1:26 PM

Hi Simon I was struck by the example gave at his presser yesterday announcing the lawful access bill. He cited the case of the missing child that was returned to its parents. Apparently the telcom initially asked for a warrant but when apprised of the situation immediately cede to the RCMPs request in effect proving lawful access unnecessary.

Yes, he should resign, for being that kind of a piece of crap that stiffs his ex for support.

This time the MSM notices

Just the title, Minister of Public Safety, sounds like something straight out of The Party. (aka The Harper Government of Canada)

This government's attitude on crime is not just wrong and outdated, it's alarming.

Build more prisons. Get tough on everything to fill them. Then build more prisons! Start to driftnet fish through ordinary people's live to find evidence of bad behaviour. Guilty until proven innocent and innocent until we catch you doing something.

It's absolutely stunning how aggressively nasty these guys have become in such a short time. In the space of about a month, Federal government Ministers have basically called me both a "radical under the control of foreign entities" and a "child pornographer".

Yes, these are spin tactics. But I'm starting to believe they actually believe what they're saying. If this bill passes, our lives will quickly become an open book for them to leaf through. They've done it before with that "noisy" veteran they wanted to silence.

Being a child pornographer and a dangerous, disloyal, radical will undoubtedly get me a reservation in Room 101 in no time.