If the Cons Want to Read Our E-Mails... 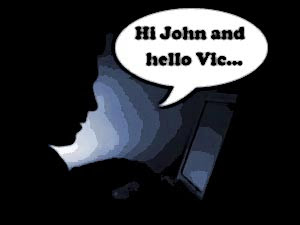 Why don't we find out what they are doing online?

You know all of this is so much fun.

And it just keeps getting better.

But let's not forget why the Cons introduced this totalitarian legislation in the first place.

And that's because Stephen Harper is a power hungry control freak, and the thought that he can't control the internet is making him crazy crazier. 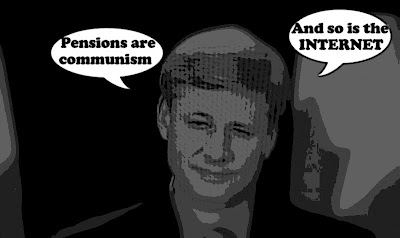 Because only by creating an atmosphere of fear can he hope to intimidate Canadians into accepting his hideous agenda. So he can kill government, slash pensions, privatize medicare, and turn this country into an extreme right-wing jungle.

And because controlling the internet is so vital, he won't give up easily.

Yup. As I said before.

For who wants to wake up in a country like this one?

When I made this video four months ago many people, including some progressives, accused me of exaggerating, saying that couldn't happen here.

I wonder if they feel the same way today, now that they've caught a glimpse of the real nature of the Harper regime?

Because I still have the same questions for them.

What are we doing, and where are we going?
Posted by Simon at 4:10 PM

What Harper really hates is, the truth about himself, being posted on the net.

Harper didn't like the fact, that he gives billions of our tax dollars, to the wealthiest corporations in the world, posted on the net. He now does his dirty deeds behind closed doors.

Secrecy is paramount to a dictator. Goebbles permitted no bad press about Hitler. The crimes of Hitler, must never reach the German peoples ears. Had there been a inter-net in Hitler's time, you bet it would not be permitted for his evil, to get to the people.

Stalin was so paranoid, he even had some of his own family executed. Uncle Joe, was really not a good uncle. If a Russian hated someone, they just had to tell Uncle Joe, they heard him being spoken badly against.

ICC Chief Prosecutor, Luis Moreno-Ocampo has given Harper a summons for, war crimes and crimes against humanity. He was hoping Canadians would forget about that.

Harper doesn't like his true party, being pointed out. He is using his very shady, dictatorship Northern Foundation Party, to govern Canada to-day. I read, the skinheads assisted Harper to organize his party. This was in 1989.

Every dictator is paranoid. The fist thing a dictator does, is muzzle the media. Then, they control absolutely everything they get their hands on.

Vic Toews behaves like a Herr Harper fanatic saying, we are in favor of Child pornography, if we are against, Herr Harper's internet snooping. Good grief what next???

Harper lied and cheated, to be re-elected. I can't understand why he was even allowed to run? He is in contempt of the House. He had a many times convicted American felon working for him. He was even campaigning, over the radio on election day.

Other country's, have no use for Harper, what-so-ever. They are fed up with Harper's bullying and hissy fits, when he doesn't get his own way.

Harper is locked out of, The New Trans Pacific Trade Group. Harper was not permitted a seat in the U.N.

Canada is really going to suffer, because of Harper's stupidity. It sounds like China isn't all that keen on Harper, there's a good chance, Harper may be empty handed, with his deals with China. Harper preaches to China, on their terrible Human Rights. Harper has done the same to the F.N. People. What is he doing to the Canadian people? Other country's say, how badly Herr Harper is destroying Democracy in Canada. He has taken our Civil Rights and Liberties away from us.

Harper and his ministers, Toews and Oliver, are certainly off beat. Flaherty preaches about cut backs on the services, we pay through the nose for, while he wastes $1,300 per night on luxury hotel suites. I won't even talk about, Harper stupid $1 billion dollar fake lake.

Sympatico! My baby booming friends have bought the Establishment hooker, slime and stinker. They pay lip service to 'the rich get richer' but hope to earn that much. Some profess to be born again yet espouse hate against 'privileged' groups like natives, prisoners and welfare recipients. I still fly the freak flag, imitate three Beatles on guitar and keyboard, pet strange kitties, and say "hi" to people on the street. White Christian friends seem to be hung up on pitbulls, guns and drug testing. Vic Toews' private life is fair game. If you claim 'family values', are elected on that basis, paid millions of dollars to accuse people of being kid fuckers, attack gay marriage because it leads to polygamy, then you can't impregnate someone who is not your wife!!! He had two 'wives' simultaneously. Textbook polygamy.

hi anonymous...after years of writing about him the three things that frighten me the most about Harper are his rigid right-wing ideology, his love of absolute power, and his belief that he is never wrong. Preston Manning warned us about the last one, but not enough people listened. And now we're seeing the consequences...

hi Pester...you know I usually stay away from the private lives of politicians, but since Toews is such a ghastly authoritarian, religious bigot, and hypocrite I feel he deserves what he has received. I personally believe he is unfit to be a Minister and should be fired immediately.
But since this is a very different Canada than the one I know and love, I'm not optimistic in that regard.
But I do love this:

I still fly the freak flag, imitate three Beatles on guitar and keyboard, pet strange kitties, and say "hi" to people on the street.

Because even in these dark times it's still the only way to live. Good for you...

It's stunning how much getting a few extra seats in an election can change how a party acts.

How many things have they already done that they couldn't get away during their Minority years? Just the attitude change is amazing.

"Shut up kiddie diddler! Tap that radical's cell phone! East Asia has always been our friend!"