The Bright Side of the RoboCon Scandal 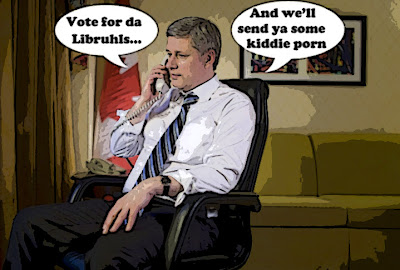 As the RoboCon scandal grows bigger and bigger. And our country begins to look more and more like a fascist state run by criminals. Even BEFORE they start reading our e-mails.

I thought I'd try to look on the bright side eh?

And that is, in no particular order:

(1) Great Ugly Leader is not going to get away with this one.

The crude effort to direct opposition party voters to wrong polling locations, perhaps in as many as 27 ridings, doesn’t bear the hallmarks of a competent strategy. Almost guaranteed to backfire, it was — in a word — stupid.

But that doesn’t absolve Harper of responsibility for this scandal. He’s like a hockey coach who assembles a team of goons, urges them to be merciless, and then claims no responsibility for the wild infractions and nasty concussions that inevitably result. In fact, he’s more to blame than anyone else.

And if Elections Canada and the police do their job it could be his Watergate.

(2) Some of his former friends are starting to sound like his enemies.

To Gomery, or not to Gomery? That is the question.

As the full weight of the robocalls scandal settles over official Ottawa and the players martial their forces for war this week in the House, it has become quite clear that the Conservatives have no decent line of defence, here. They’re flying blind.

The Conservatives won their majority with 166 seats. That’s a margin of 11. That means the legitimacy of the Tory majority is in question. It’s simple math.

And since the Con margin of victory is 25, and the number of robocall ridings is now 34,  the legitimacy of the entire Harper government is now also in question.

(3) Since no sane person can now claim to be surprised that the Harper Cons are brutish and dangerous thugs, the time to mobilize Canadians has finally arrived.

We don't need to wait until 2015 to get rid of this government. Nor should electoral reform or cross-party cooperation be our only target, as valuable as those might (or might not) be. With mainstream Canadians questioning the most egregious of Conservative smears and strategies, it's an opportunity to broaden the conversation.

So let's all cut the righteous surprise -- it's time to mobilize.

Drive those fascist thugs from power by whatever legal means necessary.

And then arrest them. 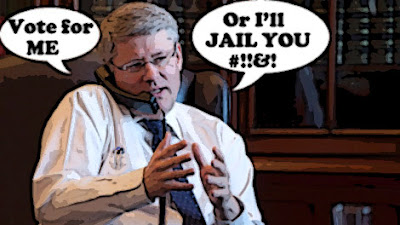 We've got the Cons where we want them.

Good column. Nice ideas. But don't think anything will happen.

The newly annointed head of the RCMP isnt' going to do anything. He just got the job.

Elections Canada, they will do as they are told or loose their jobs.

Investigative reporting by MSM, not happening.

It will be up to the independant investigators and computer techies to sort this one out. The NDP, Green, & Bloque, Liberals will have to keep this going in Parliament until they are all dragged out by the sergent at arms. Then maybe some one will notice.

The Gov. Gen. won't do anything, I think he too owes his job to Harper.

They have gotten away with it, Harper has his majority, the tankers & pipelines will proceed and so will their Viclistening legislation.

Harper & his Cons were always keen to yell at the Liberals but Harper is just like Mulroney. People just need to go back and read Stevie Cameron's On tHE Take. It covers Mulroney's years and what the cons did then. This group of Cons is no better. They are not only ensuring they and theirs gets everything, they will enable legistlation to ensure they stay there. They owe it to China to do so.

We will become the newest fascist state. Harper will start building his prisons and you know who will be in them. The Cons have already started referring to enviornmentalists and those opposed to the pipeline & tankers as terrorists and we all know what they do with terrorists.

@e.a.f. - Nice attitude Donny Downer! What's the problem? No guts? Easy to sit and 'woe is me' isn't it? Obviously you aren't one of the millions of Canadians that do care about our country and what this despot is doing to it!
This latest scandal will only die if we allow it to - and I sure as hell don't intend to!! I'm sure Simon doesn't either! They are talking about a possible 34 ridings now, and Senator Baker spoke today on Tom Clark, CTV, saying there was no question that at least 'some' of the ridings will have to have by-elections.

RISE UP DAMMIT!! Grow a pair, and stand on guard for your country! Help us, instead of sitting and wallowing in your own negativity!
WE NEED MILLIONS of Canadians to arrive at Parliament Hill on May 1 thru 5 (May 1 Labour/Strike) May 5 - massive Occupy Canada protest! We need be there and stay there until this govt. steps down!
With such a defeatist attitude I certainly hope you don't do much posting - no wonder it's so difficult to engage Canadians!!

hi sassy...thanks I saw that and I thought it was brilliant. I was going to include it my post but I was too envious. ;) I'm going to have to do something about that immediately...

hi e.a.f...OK that does it. I'm applying for refugee status in Sweden immediately. ;)
Seriously though I understand how people can feel pessimistic, because every morning when I wake up, and realize I'm living in Harper's Canada, I let out a groan that makes the birds in the tree outside my window fly off in terror. But we must be hopeful, there are things we can do to cripple the Con agenda, and hopefully this will unite progressives and get others to join our ranks so we can thrash the Cons in the next election. If they haven't been arrested first, which is what I pray for every night before I go to bed...

hi cheena1...yes, that's just what I told e.a.f. just a little bit more gently. Actually quite a bit more gently.;)I'm very excited by this May 1-5 event. It really is time Canadians took to the streets and let the Cons know how we feel. I realize we're a pretty laid back people, but stealing an election is the absolute limit, and enough is ENOUGH...

"... there was no question that at least 'some' of the ridings will have to have by-elections."

But, there won't be. And look at it this way, even if by-elections were called, Canadians have proven that going to the polls is worse than root canal done with a dull spoon. It would backfire and perhaps even give the Harpercons a stronger majority. When these poll-station, democracy hating Canadians ask why there is a by-election to cut into their Timmy Horton's time, the Harpercons will spin this, yet again, as the opposition parties causing their "mischief" again over nothing. Blame the opposition!! The msm, of course, likely including Stephen Maher who broke the story with Glen MacGregor, will feverishly carry that message. Maher already said on "Question Period" yesterday that this robocall thing wouldn't have changed much of anything. Evidence, he ain't a goin' any further. Let's also remember, that if one reads Maher's previous columns, he is a Harper cheerleader in his own rite. And his employer, Postmedia, serves one master, and we all know who that is, don't we? So, it will be drummed into voters' heads that this by-election is a waste of tax-payer's money, because the democracy wastes their tax dollars for a by-election that they think wouldn't change much of anything. And after the msm and Harpercon spin doctors are through, it wouldn't be far fetched.

Let's remember one thing, it's always ok and anything goes, if you're a conservative.

I tend to think E.A.F. is correct. Harper has all his ducks in a row. He has taken the teeth out of all regulatory authorities. Either by appointing a tame lap dog or by making sure they do not have enough money to operate.
We may be surprised though, if the GG or the RCMP Commissioner wants to grow a conscience things may fly into Harper's face.
We can only cross our fingers and hope.

I fear that E.A.F may be right.
Harper has all of his ducks in a row. He has placed his lap dogs in positions that could threaten him. The Senate, the GG and the RCMP Commissioner being the two most prominent places. He hasn't got the judiciary under full control yet, but he has injected supporters into the SCoC who may be in a position to swing their vote in his favour.
He has also de-nuded many departments that are in his way simply by cutting their funding. The government we knew six years ago is gone. Scientist, researchers, legal and social advisory boards, all gone.
His next step, and it will come soon, will be the destruction of private critics of his rule by taking away the none profit status of social and environmental organizations. The environmentalists will be hit first because they are in the way of his backers plans for a pipe line.
Our only hope is that the GG or the RCMP Commissioner grow a conscience. Let's cross our fingers and hope they do.