Vikileaks and the Great Distraction 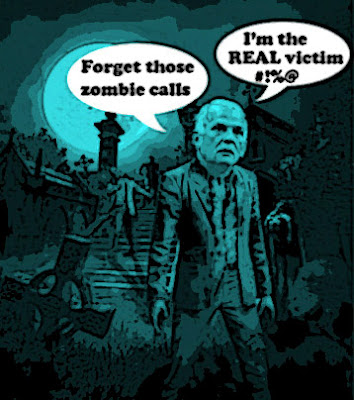 I was disappointed to see Bob Rae apologize to Vic Toews today for the Vikileaks campaign.

Not because of the apology itself, which was the decent act of a decent progressive. But because he didn't ask Toews to also apologize unequivocally for calling opponents of the fascist bill C-30 supporters of child pornographers.

Which was far worse than anything that Liberal staffer did. Especially since Toews still hasn't apologized for that filthy slur, continues to defend the bill and rewrite history.

But what really annoyed me was that so many in our idiot media spent so much time today comparing the Vikileaks episode to the RoboCon scandal.

Any way you look at it, this has been a bad stretch for the Tories. Not only is the opposition furious, but the generally sleepy Canadian public has seemingly roused itself and started to pay attention. And then a Liberal staffer came along and made it all better.

So ends the mystery of Vikileaks, but at the cost of robbing the Liberals and Mr. Rae himself of much of their fiery indignation over the allegations of impropriety that have recently slammed the Conservatives.

Which it total unadulterated bullshit. For while Vikileaks may have embarrassed Toews, it was not illegal, and should not be mentioned in the same breath as this criminal attempt to steal an election.

For now there can be no doubt that this was not the work of a few rogue Cons, but a vast conspiracy to undermine our democracy.

The good news is I'm confident that most Canadians will see it that way, and that if Elections Canada and the police do their job, judges will eventually order that new elections be held in some or all ridings.

And that some Cons will end up in jail where they belong.

The great distraction will not work. Liberals who think it will should relax and get a life. I mean Holy Miss Manners what planet are they on?

Vikileaks will soon be forgotten.The RoboCon investigation is just beginning.

And sooner or later it will destroy the Cons...
Posted by Simon at 8:08 PM

Right on, Simon. The two do not compare - apples and oranges.

I'm guessing though that the reaction to this revelation by Harper and his thugs would have been tenfold angrier and demanding of blood if they weren't under the spotlight for ELECTIONS FRAUD.

When I put on my conspiracy hat, I think Rae orchestrated the vikileaks revelation. It's just a little too pat. It's like he's set a trap for the CPC and its BTs. They bit. They are now actually trying to draw an equivalence between someone being politically incorrect (vikileaks) and someone stealing an election (votergate). They think Canadians are stupid, and can't tell the difference.

But we can tell the difference. One activity is a firing offense. The other is a criminal offense.

As someone who has seen what is talked about in the party, I can only say God help Canada in the next four years. Because it won’t be the country that veterans, like my grandfather fought so hard to protect.

Link above goes to all cartoon, the one I was referring to is


Cogratulations. Welcome back to civilization.

My grandfather, a veteran of WWI, warned me about the likes of Harper when I was a child. The dirty thirties were rife with the stool pigeons, backstabbers and sycophnats whose collective example is the life model for this piece of human garbage.

Given what you have found out for yourself first hand and despite what I have said, I believe that you would not be surprised to know that I am a conservative.

hi Beijing...the way people like John Baird were carrying on today, like a pack of offended virgins, was laughable. However, I would go beyond apples and oranges. Comparing Vikileaks to the RoboCon scandal is like comparing a grape to a watermelon... :)

hi liberal supporter...I'm not sure about your conspiracy theory, but you sure got this right:

One activity is a firing offense. The other is a criminal offense.

And if the Cons think that Canadians are too dumb to tell the difference they're in for a nasty surprise...

hi sassy...OMG. Thank you, what an absolute classic. Of course, I immediately...um...borrowed it for use in future post. I can't help feeling that if Young Frankenstein was a great horror movie, Young Harper would be even scarier... ;)