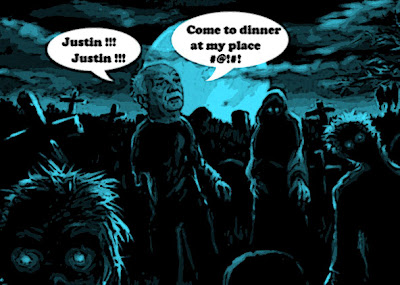 An angry Vic Toews wants an investigation into whether Justin Trudeau encouraged personal Twitter attacks against him after it was revealed a Liberal staffer was the mastermind of the Vikileaks Twitter controversy that aired details of Public Safety Minister’s divorce in retaliation for an online surveillance bill.

Oh My  Godzilla. A tweeting zombie? Justin, Justin run for your life !!!!!

Has that brutish Con thug no shame? Does he really think that Canadians are going to believe he's a victim? When he wants to destroy the internet, read our e-mails, and turn us into a police state?

And why do we keep apologizing?

Without mentioning that Vikileaks may have been a low blow, but it only reflected public outrage over the threat to the internet and our democratic freedoms.

And was a way of getting back at Toews for calling us all perverts, which is infinitely lower than exposing the messy details of his divorce. And his sanctified hypocrisy.

But of course the really scary part is that the Con zombie is still fighting tooth and nail claw, to keep his bill from being changed in committee. He's writing op-ed pieces.

He's using his own office, and our tax dollars, to push his partisan message.

Some have accused me of not reading a bill I’ve been involved in shaping for over half a decade. Ironically, when I read most media coverage of C-30, I am struck by just how poorly the bill is understood by many writers.

Now we're the ones who are confused not him eh?

Oh boy. Run for your life Justin. And as for the rest of us keep your eyes on the ball. For in the growing darkness the danger is still great.

The Con may be a zombie.

But Simon, you missed the next part of Justin's tweet: "What a time to mislaunch an unfinished tweet. I'm sorry for my part in this, Vic. Now let's move on to real issues. Like electoral fraud." LOVE that guy! What a hoot!
Lib apologies kind of put closure on the issue (Vic isn't bright enough to get that though) and as a result they get the high ground - over the Con pond scum.
Great blog btw!

My greatest fear about Bill C-30 is not the information that the Minister's 'Appointee' (AKA partisan political hack)can find out, but what they can add. It would be very easy for them to add something that could then incriminate any critic that is being a bother to them. GrannyVH (formerly Granny)

hi Harperwatcher...I did see the other part of his tweet, and to be fair to Justin I probably should have included it. Because the electoral fraud story is the biggest story in Canada. But I guess I'm just frustrated that in all the talk about Vikileaks today, so few mentioned the anger that gave birth to it, or the fact that Toews hasn't apologized, or the fact that Bill C-30 is still alive and kicking. And that's an important story too, because if they want to steal our country, first they have to steal our freedoms. On the other hand, maybe it's just because I hate to apologize to the Cons for ANYTHING after what they are doing to Canada. I'm like that you know... ;)

hi anonymous...there are so many parts of the bill I don't like. In addition to violating our freedoms it would also make the internet even more expensive in Canada. But the one I hate the most is that it would scare many Canadians, and muzzle dissent by making them feel that Big Brother was watching them, even if he wasn't. Which is of course what the sinister control freak Harper is really after...

We are living in a fascist dictatorship regime. If you remember Hitler's henchmen, they ranted and raved non stop. Toews calls us pedophiles, for objecting to his snooping on the internet. Oliver ranted and raved, because we don't want the Enbridge pipeline, nor the dirty oil tankers. We are killing Canada. Dictators are always very adept at, shifting their blame onto others. Hitler blamed the Jews. Because of Harper's tyranny, he has turned Canadians against him.

Even other country's are against him. The New Trans Pacific Trade Group, have banned Harper. The U.N. wouldn't even give Harper a seat. Harper always manages to anger everyone at the meetings of Nations. Durban, Davos and Copenhagen for just three. They are fed up with Harper's bullying and his hissy fits, when he doesn't get his own way. Harper is truly the worst P.M. in Canadian history. Canadians despise dictators and fascists. We went to war, so we wouldn't have someone like Harper governing our country.

hi anonymous...as you may or may not know I've been predicting the Cons would end up looking like fascists for more than five years. That's the good news. I feel vindicated eh? And all those who laughed at me look like patsies or idiots. And the bad news? Unless somebody arrests those Cons quickly,I'm going to have to make plans to leave the country in a hurry... ;)